A pastry chef based in New York has created an ice cream sundae that costs US$300, $1,500 if you count the bespoke bear-shaped crystal bowl it is served in. 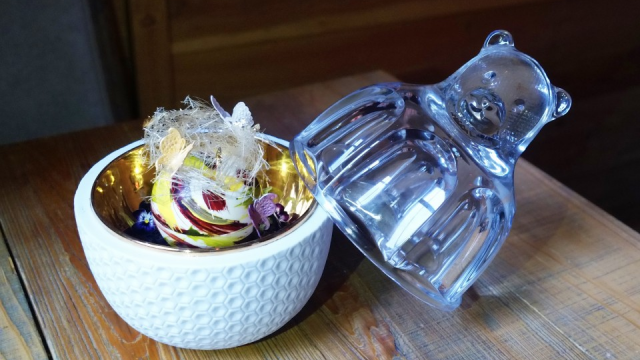 The “Bear Extraordinaire,” launched at the upscale Baccarat Hotel in Manhattan last month. Costing $300, the ice cream used in the sundae is made from vanilla beans imported from Madagascar and is served in a white chocolate shell – hand-painted with strokes of coloured cocoa butter – that sits on top of a mixture of black truffle, dark chocolate and cocoa nibs.

The expensive creation is then topped with a hibiscus Champagne sauce, edible gold leafing and thin-spun sugar threads with fondant butterflies and edible flowers.

It comes served in a $1,200 crystal and porcelain bowl shaped like a bear, the purchase of which is optional, as reported by Kyodo News.

The “Bear Extraordinaire” is the vision of Peruvian chef Rosario Wakabayashi, and will be available at the Baccarat Hotel through Labor Day. However it’s not the world’s most expensive dessert.

The record for the world’s most expensive dessert, according to the Guinness World Records, is held by The Frrrozen Haute Chocolate ice cream sundae, which costs $25,000 (£12,000) and was added to the menu of the Serendipity 3 restaurant in New York in 2007.

The dessert uses a blend of 28 cocoas, including 14 of the world’s most expensive, and is decorated with 5 g (0.17 oz) of edible 23-karat gold and is served in a goblet lined with edible gold.

Made in partnership with luxury jeweller Euphoria New York, the base of the goblet is an 18-karat gold bracelet with 1 carat of white diamonds. The dessert is eaten with a gold spoon, itself decorated with white and chocolate-coloured diamonds, which can also be taken home.