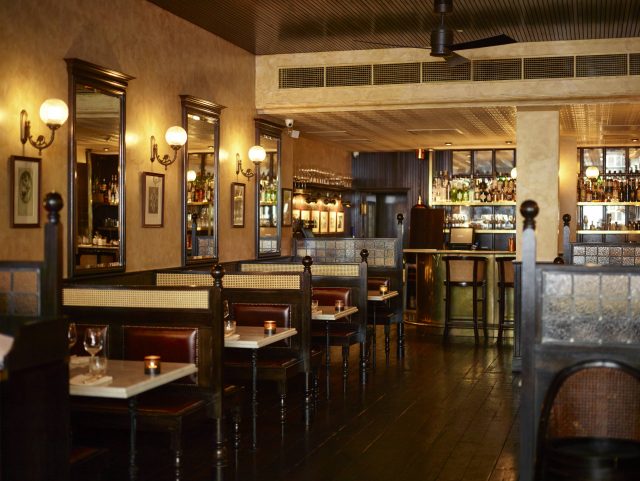 The concept: Everything the Sethi’s touch turns to gold. Brothers Karam and Jyotin and their sister Sunaina are the trio behind some of London’s most successful new restaurants, including Taiwanese steamed bun specialist Bao, Sri Lankan pancake parlour Hoppers and Champagne and hotdog joint Bubbledogs.

The jewel in their crown is Gymkhana, an Indian restaurant in Mayfair inspired by the high society sports clubs that flourished in India during the days of the Raj. The restaurant won a Michelin star in 2014 for its boldly spiced dishes cooked in tandoor ovens and on charcoal grills.

The décor: Gymkhana has recently made a hero of its basement bar, modelled on a 17th century East India punch house, which boasts a silk carpet and chocolate brown leather Chesterfield banquettes.

The drinks: In keeping with the current celebrations of female achievement 100 years after women got the vote in Britain, Gymkhana’s new cocktail menu features four sips inspired by pioneering women in India.

Among the colourful characters being celebrated are captain Prem Mathur, India’s first female pilot, and Bachendri Pal, the first Indian woman to reach the summit of Mount Everest.

The fruity sour was so easy to drink it was hard to notice the alcohol, and worked well as an alternative to pudding at the end of the evening. My night began with a Bombay Talkies cocktail – a sweet-sour twist on a Kir Royale blending raspberry and hibiscus syrup with Champagne.

Before handing me the cut crystal flute, Patrick our Polish bartender digs out a vintage sugar bowl from behind the bar.

Picking up a tiny pair of silver tongs, he pops a sugar cube into the drink and delights in watching it fizz frantically at the bottom of the glass, creating a whirlwind of tiny bubbles. The effervescent sip pays homage to Devika Rani, the ‘first lady’ of Indian cinema who starred in one of the earliest Indian films to be dubbed into English.

Signature sips: The bar specialises in classic Indian punches with contemporary twists, and also boasts a selection of pink G&Ts, which were popular with ex-pats in India during British rule, made in the traditional way with a few drops of Angostura bitters.

Gymkhana’s signature sip is the Quinine Sour, a twist on a White Lady made with Tanqueray, quinine, ginger and egg white, and finished with a curry leaf for added aromatics.

The star of the show is the Green Leaves, a neon green twist on a Margarita that blends Tequila, cucumber, lime, mint, pink Himalayan salt and green chutney cordial in a lip-smackingly fresh, gloriously savoury ensemble.

The food: The bar serves an array of snacks including some of the restaurant’s signature dishes, giving imbibers a taste of the action upstairs. All are powerfully spiced, so are not for the faint hearted. The fiery venison stuffed naan, a tad on the dry side, was tamed by a cucumber raita.

I was delighted to discover the kid goat methi keema on the menu; a dish even the most hardened of restaurant critics have written joyous odes about.

Served in a pretty copper dish, the assertively spiced meat had the rich, earthy, smoky savouriness of goat without a whiff of the feral flavours the sometimes come with it. Best of all, it was served with four buttery brioche buns to slather the sweet meat onto.

Who to know: Patrick the head bartender takes the time to tell the stories behind the drinks and will tailor make a cocktail to your taste preferences.

Don’t leave without: Ordering a plate of the Amritsari shrimp, then maybe another…

Last word: The Sethi’s are so tapped into the zeitgeist that they come up with concepts we didn’t even know we wanted, then can’t live without.

Having read dozens of gushing reviews, Gymkhana didn’t disappoint, and it’s heartening to know they take their cocktails as seriously as their food.