Earl Grey-based liqueurs and tea cocktails are brewing up a storm in London’s bar scene and the off-trade – and some think it could even replace our love-affair with gin. 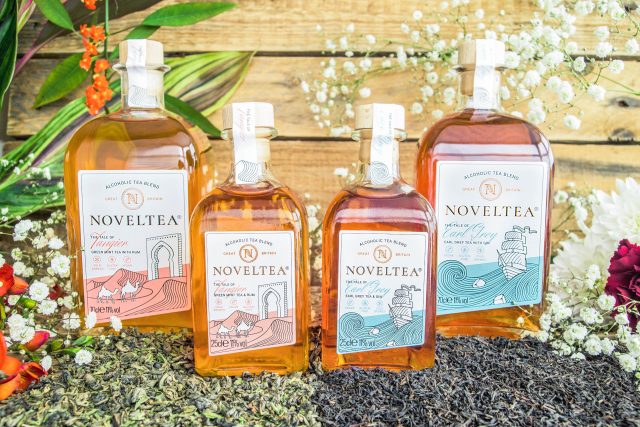 Tea, which is the second most consumed beverage in the world after water, is becoming more visible in the cocktail world.

Noveltea, a brand which combines cold brew tea with spirits, launched in September 2017 and has already sold 10,000 bottles. Their combination of gin and Earl Grey was featured as John Lewis’s Gin of the Month this March.

Founders Lukas Passia and Vincent Efferoth moved from Germany to the UK two years ago to study for a Masters at Newcastle University. They were soon enchanted with the British tea culture.

“Vincent and I ordered afternoon tea in Newcastle one time,” Passia says. “We thought we’d just get a very expensive pot of tea for £25, but we didn’t expect a massive tray of scones and sandwiches! We were super surprised about it!

“We were also quite surprised that people quite often have a glass of Prosecco or Champagne with their afternoon tea. Noveltea can combine the Prosecco and the tea.”

Mixing alcohol and tea, however, was yet to hit the mainstream and was always going to be a risk. “Even if the culture likes tea and alcohol, it doesn’t mean that the combination is accepted,” says Passia. Their extensive research, however, showed that people loved the idea. And it’s not just the UK who have taken to an alcoholic brew – Noveltea launched in China in March.

Noveltea currently has two flavours and they’re working on a third. The Tale of Earl Grey embodies the British tea culture and combines gin and Earl Grey, while the Tale of Tangier was inspired by Efferoth’s trips to Morocco and mixes a Moroccan mint tea with rum.

Each flavour took 450 attempts until Passia and Efferoth were satisfied, and Passia says that their product has a more authentic tea flavour (cold brewing loose leaf tea for eight hours) and a higher alcohol content (11% abv) than its competitors.

They’re keeping their third flavour, which will launch within the next three months, under wraps. They can say, however, that it will be themed around the Asian tea culture and mix Chinese Oolong tea with an as-yet-undisclosed spirit.

“I think alcoholic teas are a trend that is just about to start or is just recently starting,” Passia says, “and the UK will be at the forefront. I hope it’s going to replace the gin trend.”

One sign that alcoholic teas are hot right now is the introduction of tea-based cocktails last November in Aqua Shard, the bar on the 31st floor of the London skyscraper.

Their ‘Pop from the Past’ cocktail range, priced at £18 each, mix a range of teas with Tanquery No. 10 gin. They’re modelled on Club Cocktails, the first bottled cocktails which were served at the beginning of the 20th Century. The Pop from the Past beverages are carbonated and bottled in house.

Myles Donneky, bar manager at Aqua Shard, said: “Punch is a growing trend at the moment – which is made with tea, spices, spirits, a citrus element and sugar – but we wanted to create something different.

“Our Mandarin & Lapsang cocktail is a particular favourite, in part due to the distinct depth of flavour from the Lansang – Winston Churchill’s favourite tea. The smoky flavours that form the base of the serve are balanced perfectly with sweet and seasonal mandarin juice, topped with Tanqueray No. Ten and sparkling wine.”

Donneky, like Passia, is confident that the alcoholic teas will only grow in popularity. He said: “Tea-based cocktails have been around for a while, but we’re seeing many more bars embrace their potential, serving them in more creative way. With over 3,000 different varieties of tea, there’s huge potential for this trend to grow.”

Noveltea has also recently launched a range of cocktail recipes and have hired a fifth team member to focus on the on trade sector and cocktails. Passia said: “Cocktails are something which is crafted, which is artisan, where a real skillset is needed. We have a couple of really strong cocktail bars who have started offering Noveltea cocktails. It’s something different, a completely new tasting experience.”

Turn over for the recipes for two of Noveltea’s suggested recipes for its Tale of Earl Grey liqueur.