Fine wine merchants around the world are “cautiously optimistic” about the performance of the market this year reports Liv-ex. 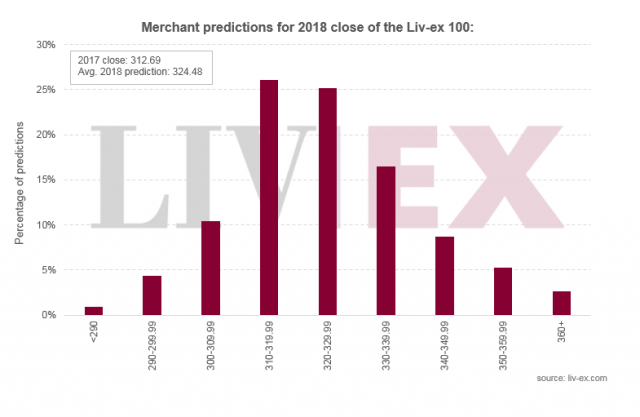 Each March Liv-ex surveys its 440 members around the world to take the pulse of the fine wine market and expectations for the year ahead.

This year, on average, the respondents expect the Liv-ex Fine Wine 100 index – which tracks the 100 most widely traded labels – to rise 3.7%, which would represent a third straight year of gains for the market.

In all 75% predicted the market finishing up to some degree, 17% thought it would fall and the rest predicting it would run flat.

If the market continues its current course then the more bearish predictions may prove the more correct; as the index has declined every month so far this year and is currently down 0.6% though that is very far from an insurmountable hole for the market to dig itself out of.

Looking at the broader index, the Fine Wine 1000, Liv-ex also asked merchants which sub-indices they expect to perform best this year.

The top choice by a long way was the Burgundy 150 index, with 76% of those surveyed taking it as their first pick, a sign that most foresee no slowing down in demand for the wines of the Côte d’Or.

The next top pick was the Italy 100; a country that many merchants especially in the UK believe contains a lot of potential – especially its Super Tuscans and Barolos.

The third top pick was rather more hotly contested with the Champagne 50 just winning out in the end, beating, as it turns out, the otherwise under-performing Rhône 100 which has shown some encouraging growth in more recent months.