American hip hop group the Wu-Tang Clan is adding a premium vodka to their range of liqueurs to mark their 25th anniversary. 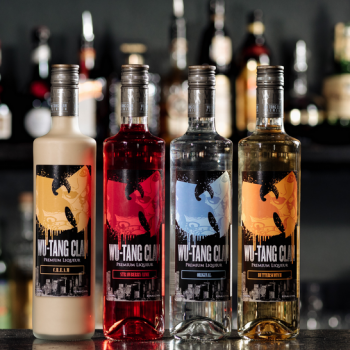 The group launched into the world of spirits in 2017 with four flavoured liqueurs: Original, Strawberry/Lime, Butterscotch and C.R.E.A.M., named after their 1993 hit by the same name.

Available exclusively in Australia, next month the clan will add a vodka to the range, marking their 25th anniversary, at an event in Sydney that will feature performances from hip-hop star Jay Sean and musician Timomatic, as reported by the Daily Mail.

It’s not the first time that the group’s appeal has crossed over into the world of drinks. In 2015, a US brewery released a barrel-aged ale named the clan’s hit Ain’t Nuthin’ to Funk With, having played the the rap group’s music continuously next to the barrel over a six month period.

The Wu-Tang Clan, who hail from New York City, released their debut album in 1993, called Enter the Wu-Tang (36 Chambers), and which is still considered a seminal record in hip hop history.

Notably, in 2015 the group released an album with the aim of circumventing the influence of Spotify and You Tube.

Only one copy of Once Upon A Time In Shaolin – a 31-track double LP – was released and sold through a private auction for US$2m, with the buyer told they could not share the album for another 88 years, 2103.