Online forum Reddit has shut down a slew of ‘dark net’ subreddits in an effort to crack down on the illegal trading of drugs, ammunition and stolen goods, with a popular craft beer forum used by enthusiasts to trade beer also banned in the process. 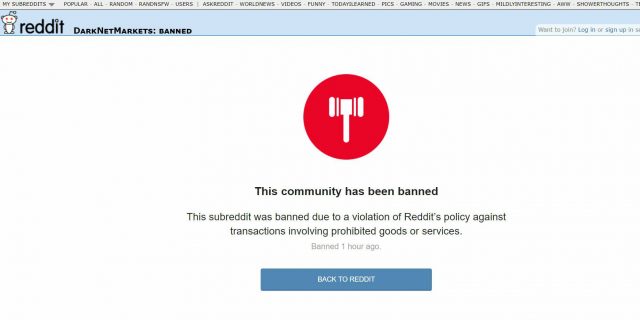 Reddit is a social network where users can talk about controversial topics, memes, and online protests within categorised subreddits, but has simultaneously become a platform from which to purchase or win goods from other members and communities, opening a loop hole in the system that has enabled it to become a middleman for obtaining prohibited items.

As part of its crackdown on illegal activity on the site, the company announced rule changes this week on its r/announcements page to prohibit the exchange of items including firearms and ammunitions, stolen goods, sexual services and falsified documents. Among the forums banned were r/darknetmarkets, a controversial forum for discussing dark net vendors that sell drugs, stolen data, and counterfeit goods, among other illegal items.

However more surprising was the banning of the forum’s popular r/beertrade subreddit – an active platform used by craft beer enthusiasts to talk beer and trade their favourite brews. At the time of its closure, the forum had 20,000 subscribers. A similar forum called r/scotchswap – where users traded in Scotch whisky – was also banned by the forum.

“We considered this a lot, and this change is not due to any bad actions by these particular communities,” the Reddit-Policy account wrote. “However, due to the controlled nature of alcohol, Reddit is not built to ensure that the sales are happening legally, and so we can no longer continue to host communities solely dedicated to trading of alcohol or other controlled substances. However, communities dedicated to discussion of craft beer remain fully within the rules.”

While unrelated to the trading of alcohol specifically, last month Burgundy wine was caught in the crossfire of a crackdown on searches for weapons on Google. Tightening up its search terms, users searching for Burgundy were temporarily prevented for using Google’s shopping service, because it contained the word ‘gun’.