American wine critic James Suckling debuted his documentary “The Miracle of Alto Adige” at the Sonoma International Film Festival last week, taking a look at the winemaking from the steep northern Italian vineyards in what is his second wine film following his previous documentary on Cannubi in Piedmont. 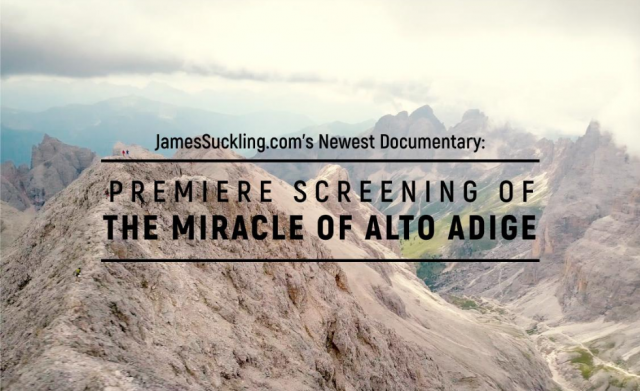 The 23-minute documentary is a collaboration between the wine critic, his son Jack Suckling and Hollywood director James Orr, who also directed Suckling’s other films including Cigars: The Heart And Soul of Cuba on Cuban cigars and the Barolo-focused Cannubi: A Vineyard Kissed by God.

The documentary is a 23-minute film highlighting the “uniqueness of the mountainous vine-growing region” in Northeast Italy through drone and helicopter footage as well as interviews with winemakers from a handful of key wineries including Klaus Gasser from Terlano, Andi Punter from Franz Haas, Gottfried Poillinger from Nals Margreid and Willi Sturz from Tramin to name a few.

“Alto Adige is a picturesque place, dotted with castles, small towns, and apple orchards as far as the eye can see. But it’s on the steep mountainsides, where most of the grapes are grown, and some of those vineyards are as high as a thousand metres, making them extremely difficult to farm,” Suckling describes Alto Adige in the introduction to the documentary. “If you believe that greatness is never easy, then the producers in Alto Adige are making great wine because it certainly isn’t easy.”

Orr, known for his work on such movies as Three Men and a Baby, Sister Act 2: Back in the Habit and Mr. Destiny, shot and edited the production of the film. “I am a wine lover and I’ve always wanted the world to understand what a unique place Alto Adige is and how hard it is to make wine there,” he said.

First debuted at the Sonoma International Film Festival on 22 March, the film is now available for streaming exclusively on JamesSuckling.com for premium subscribers, and starting from 29 March for the general public.