It is of great interest to us at Amphora that not only do certain noisy people deride fine wine as an investment asset class, but others seem happy to participate without doing what they would do if they make any other material financial outlay; find out a bit about the market and how it operates before laying their money down. 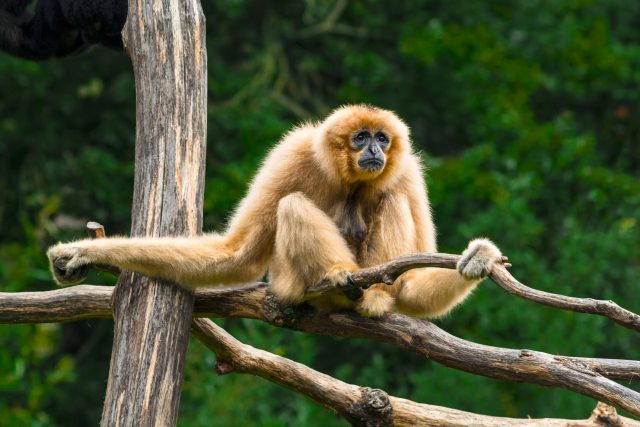 The fact of the matter is that wines don’t all go up and down in price at the same time, and even if you take a very long term view you can’t escape the likelihood of underperformance if you don’t pay attention to what you are doing. The art of long term investing revolves around the beauty of compounding growth, but the reverse is also unfortunately true: namely, if you compound an underperformance your returns will just yet worse and worse over time.

This week we have been analysing the performance of individual wines since the market finally bottomed at the beginning of December 2015. This is actually quite an important time, because in Liv-ex 50 terms the market had not touched that level since early 2010. We were therefore coming off a huge rise, a thorough shake-out, and a lengthy consolidation.

We also removed from the study wines over 20 years old, because from that point liquidity tends to diminish and prices become more volatile. This is even evidenced in our current researches with certain wines from the end of the ‘90s, so where necessary we have ignored these as outliers. Just to be clear, there is absolutely nothing wrong with buying older wines for either investment or, obviously, consumption purposes, but they tend not to be so easily accommodated within a portfolio construct.

The fact is that the range of performance of vintages from all producers is extremely wide over the period under consideration (28 months). One of the wider spreads is exhibited by Trotanoy. If you had bought the 2012 at the start of the term you would have made around 5%, whereas the 2005 would have appreciated around 70%. Here is the chart illustrating this divergence: 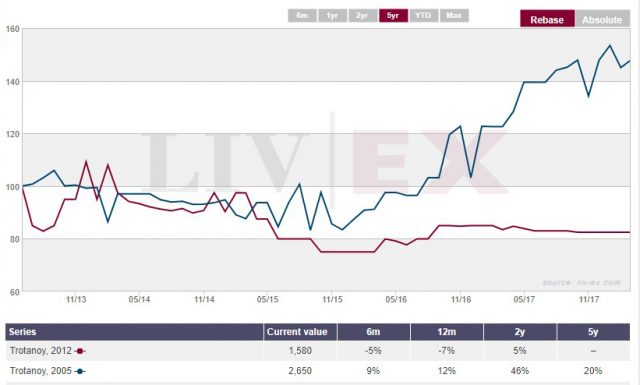 Note the timeline at the bottom. This is a five year view but the 2005 really starts to escalate as the market turns north at the end of 2015, the 2012 having become physical earlier in the year.

Not that there was anything wrong with the 2012s in general at this point. Far from it. Imagine if someone had suggested you buy Petit Mouton 2012 instead of Trotanoy 2012. Here is the chart over the same time frame as earlier: 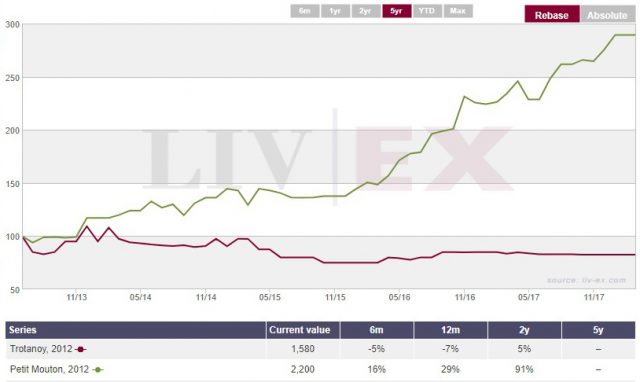 Against the Trotanoy’s 5% the Petit Mouton would have gone up 120%. That’s the sort of steer most people should be looking for, in our view!

Certain wines have a somewhat smaller spread, but even the narrowest is still a healthy 25%. Léovilles Las Cases and Barton represent a particularly interesting study in this respect, because while in both cases the spread is the same, they are respectively bookended by the opposite wine. Léoville Las Cases’ ‘poorest’ performer (excluding outliers) is the 2007 rising 24% while the 2013 rose 51%. By contrast Léoville Barton’s best performer is the 2007, up 53%, while its poorest is the 2013, up 25%.

The key question, of course, is how could we have known that the best LLC might have been the 2013? The answer is of course that you couldn’t, because you don’t have a crystal ball. Fortunately, investing is not about looking into crystal balls, it is all about playing the percentages, and it will come as no surprise to regular readers to learn that this is precisely where the Amphora proprietary algorithm comes in.

Here is the algorithm at work, in respect of Léoville Las Cases:

What we have done is back-date the prices to the beginning of December 2015, to see what we might have recommended according to the algorithm at that time. Remember that the higher the column, the more you are getting for your pound, so the top three picks would have been 2012, 2013, and 2014. Equally, the bottom three would have been 2000, 2005 and 2007.

If you had invested equally in the top three your aggregate return would have been 42%, while the bottom three would have risen by 25%. Don’t be deceived by the 25% into thinking that you would have done well. You wouldn’t. You would have underperformed the top picks by a spectacular 70%, over less than 30 months.

This is precisely what we were referring to earlier. Even a gibbon could make you money if the overall market was going up, but it is the degree of return which is key here. At times of both feast and famine an investor has to be trying to maximise returns, because the objective is to make a small amount of money into a large amount of money without an undue level of risk.

There are metrics available in mainstream markets to help understand and analyse value, and it is fundamental value for the most part at that. Many of the assets sweat dividends. In a market place absent of dividend discount models an investor needs help to separate the wheat from the chaff, and as illustrated above, the algorithm is a great tool for unearthing relative value and conjuring significantly enhanced returns. 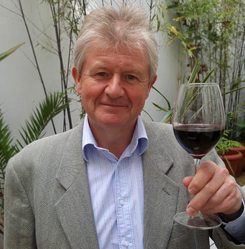