Wine cellars, businesses, the metro and treasures in museum storage in Paris have all found themselves at risk after the water level of the River Seine rose abnormally high last week. 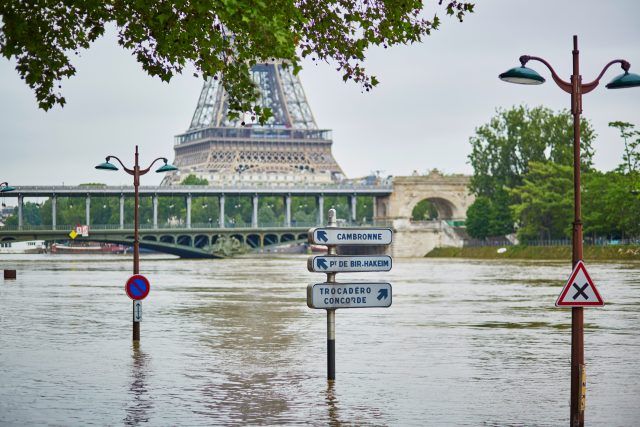 Swollen by heavy rain, the river has apparently finally reached its zenith today (29 January) of 5.84 metres (19.2 feet) – four metres above its normal level for this time of year.

The flooding has closed seven of the main statins on the RER C, knocked out electricity in a large number of homes and forced over 1,000 people to be evacuated.

All boat use on the river – save for emergency services – has been postponed until the waters recede, which is likely to begin tomorrow.

As the water rose over the course of last week it was feared it would begin to seep into cellars located near the river putting a large number of precious items, from wine to artwork at severe risk.

As the centre of Paris is at the greatest risk of flooding – and due to the amount of high value items stored there belonging to individuals and institutions – Parisian authorities advised the evacuation of especially valuable items from underground storage located close to the river.

One informal way Parisians measure the height of the Seine is in relation to where the water gets to on the large statues depicting French Soldiers of the Crimean War that line the base of the Pont de l’Alma.

As of Sunday, the water level was just over the knees of the soldiers – in 1910 it was up to their necks.

Disruptive as the flooding may be, no deaths of injuries have been reported and several Parisians (and visiting cormorants) have taken the opportunity to do some fishing.

The costs of course (and any vinous losses) will take some time to be calculated although should a flood on the scale of 1910 occur again it could affect up to five million people and cause up to €30 billion (£26.3bn) worth of damage it has been estimated.