Welsh care home gets its own pub and beer 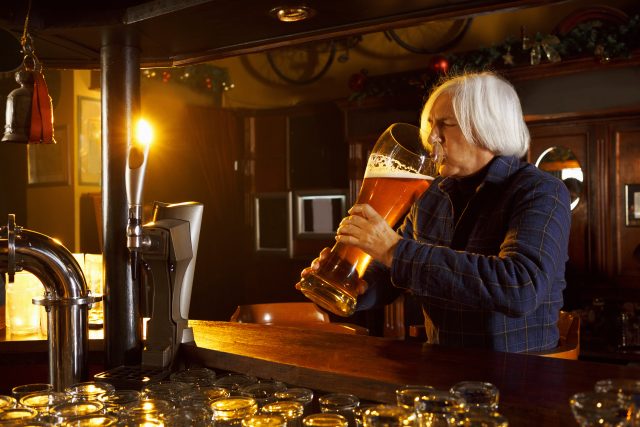 Called the Pendine Arms, the new pub allows the care home’s 60 residents to enjoy a pint without leaving the building.

Staff at the home wanted to create a “pub atmosphere” where the inhabitants could enjoy a drink as well as play dominoes, cards, bingo, take part in a pub quiz or indulge in some dancing.

Bragdy Dinbych (Denbigh Brewery) was commissioned to create two new beers by the Pendine Arts and Community Trust to serve at the pub.

Called Pobli Bobli and Pobli Wobli, the former is a 3.6% ABV light summer ale while the later is 4.3 % ABV darker, more traditional bitter.

Non-beer loving pensioners can also sample a cocktail or a soft drink from the Pendine Arms bar.

Pendine Park proprietor Mario Kreft said: “We want to give residents the opportunity to enjoy a drink or two in moderation.

“The pop -up pub is ideal for residents who can’t get out. It helps brings some residents to recall memories of visiting pubs in their younger days and we find many residents gain a great deal from the experience”.

Welsh Government AM Lesley Griffiths who sampled the beer said: “What a wonderful idea for staff and residents to have their own beer.

“Living in a care home doesn’t mean your life is over. I’m sure residents will enjoy the opportunity to have a small glass of beer, especially one brewed especially with them in mind”.

Activities co-ordinator Christine Lewis added: “It’s about jogging memories and allowing people the chance to have some quality time with their families and other residents and it certainly seems to work.

“One gentleman who rarely gets involved with activities came in and his face literally lit up. He even danced, enjoyed a pint of beer and was chatting and telling jokes.”