Archaeologists working in the Roman city of Pompeii have uncovered a stash of beautifully preserved wine amphorae that have lain undisturbed for almost 2,000 years. 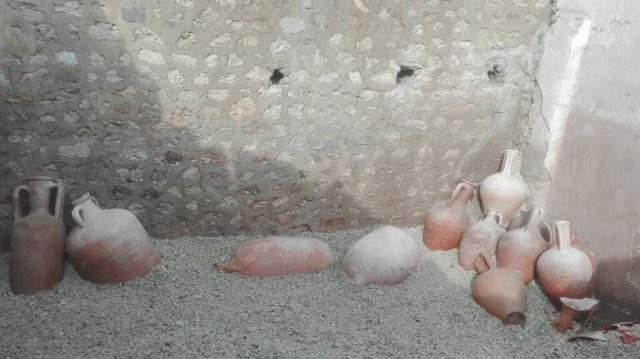 The wine amphorae are part of a raft of new discoveries at the famous southern Italian site and the first in 20 years.

Their discovery was something of a “happy accident” according to the director of the Archaeological Park of Pompeii, Massimo Osanna, because they were found while restoration and preservation work was taking place.

Uncovered behind the Schola Armaturarum – the famous House of the Gladiators – (which partially collapsed in 2010), the 15 amphorae discovered in total would have contained a variety of products but going by past discoveries and their distinctive shape a good number are certainly from Crete and would have contained sweet Cretan wine, which was highly prized by the Romans.

At least one of the amphora has clear inscriptions in what look like Greek which will provide further clues to what it contained, how much and where it was from.

Osanna explained at a press conference yesterday (6 December) that laboratory work will be carried out to try and determine what the others contained although likely candidates include more wine, olive oil or the Roman ‘delicacy’ garum a fermented fish sauce.

Frescoes were also discovered at the site and excavations are also currently underway in an area 1,000m2 in another part of the city. Despite a huge amount of work that has been conducted at the city since excavations began 250 years ago, some 40% of the site remains under the volcanic deposit that swallowed it up that fateful day in 79 AD.