An Australian winery has produced a 2016 Chardonnay called F*** Him to voice its opposition to US President Trump and promote acceptance of different races, genders, sexualities and religions. 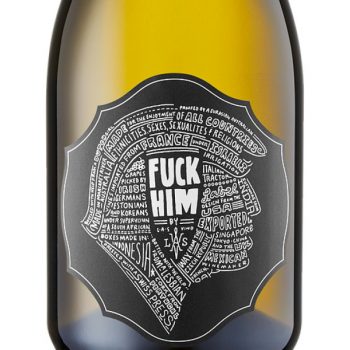 Winemaker Nic Peterkin, of L.A.S Vino in Margaret River, called its 2016 Chardonnay F*** Him “one of the best wines we’ve made”, speaking to Perth’s Broadsheet, as well as one of the most politically charged.

Intended to make a political point, while attempting to bring the world together, the wine is made from “vines imported from France under Israeli irrigation, tended to by an Italian tractor, with grapes picked by a group of Irish, Germans, Estonians, and Koreans under the supervision of a South African,” says the producer’s Facebook page.

The label itself features the a side-on profile, shaped by the names of countries and bears a striking resemblance to the President of the United States, Donald Trump.

Continuing its description of the wine, L.A.S Vino adds: “We pressed the grapes using a Swiss press, and a Mexican winemaker and Dutch girl transferred the wine into French oak. It was then sealed with a cork from Portugal, with wax from the Czech Republic. The wine was bottled with the help of a lesbian, and put into boxes made in Indonesia.”

It continues to point out that its message on Facebook was written using a program downloaded from India, with a designed in the USA, proofread by an Eurasian Australian woman in New York and exported to Singapore Tokyo and the UK, drank by those from all countries, ethnicities, sexes, sexualities and religions.

“It wasn’t really about Trump himself, but what he stood for,” says Peterkin. “Wine is such an international product. You couldn’t have a good bottle of wine without all these different components. As soon as you read the label, you’ll know the wine is about being inclusive and incorporating the whole world. Wine brings people together regardless of their background.”

L.A.S Vino, which stands for luck, art science, is a micro winery founded in 2013.

F*** Him is $55 per bottle with a limited amount available direct from the winery.