The people known to us as the Scythians were a nomadic group that ranged over a vast area stretching from their homelands in the Altai Mountains of southern Siberia, skirting the fringes of western China, Mongolia and Kazakhstan and down to the Black Sea from c.900 to 200 BC.

Possibly Iranian in origin, as with many of the various nomadic ‘horse-peoples’ that came after them out of the Eurasian steppe[1] because they left no written record of their own very little is known about the Scythians – neither their language, or religion or even the structures they lived in (though they certainly lived in tents, possibly mounted or that could be mounted on wagons as the Mongols did later).

Most of what we know of them has come down to us through the writings of the Greek historian Herodotus, various Assyrian and Persian sources and the funerary objects found in their tombs, their kurgans – often remarkably well preserved in the cold of the southern Russian steppe and permafrost of the Siberian tundra. So well preserved in some instances that we can tell the women were often fair haired and the men well built but with darker, occasionally red, hair, that both sexes were extensively tattooed and, as herders of various livestock, they ate cheese (yes, some has been preserved and is on display).

It is clear that drinking was an important part of nomad life and, with a large amount of horses, cattle, sheep and goats at their disposal, the Scythians chief alcoholic drink would have been fermented milk – something later nomadic peoples even up to the present day have also enjoyed.

One aspect of the exhibition that will be of interest to those interested in wine, though, are the drinking vessels and art work that show that through contact with ancient Greece and Persia, these warrior people came to value wine in their society. Feasting seems to have been important to their culture and we might well imagine that when Scythian tribes came across one another ritual wine drinking may have been an integral part of their diplomatic process as it would have been during religious festivals and other important events in the life of the tribe.

Herodotus (and later Strabo likely drawing on Herodotus) tells us that the Scythians liked to drink from the skulls of their enemies – a trait which, if true, they may have passed down to future horse peoples such as the Bulgars – but by the look of the objects on display, cups may have suited them just as well.[2]

There is also an intriguing theory that the idea of centaurs, the half-man, half-horse creatures in Greek mythology, may have been inspired by the Scythians.

Almost wedded to their horses from birth (compared to the maritime but otherwise plodding Greeks) it’s easy to see how the skill of the Scythians in fighting from horseback (they fought predominantly as horse archers) could easily lead to tales of men who were in fact, part-horse.[3]

Greek legend also states how centaurs were particularly volatile when drunk on wine and who’s to say if Greek merchants might have returned from the Black Sea quaking with fear and tales of these barbarians, seemingly berserk on undiluted wine and dancing wildly by moonlight, as the light of their fires rippled across the animal tattoos they covered their bodies with.

They also, it seems, had a penchant for inhaling hemp smoke. They set up what were almost small ‘saunas’ for the purpose, with a brazier of burning hemp seeds covered by a small tent under which they placed their heads and upper bodies. Herodotus says they used these vapour baths for washing but it also may have been used as pain relief in their medicine and, like any, mind altering substance, its use in religion should not be ruled out.

At any rate, it was a practice, Herodotus again tells us, that made them “howl with delight”. Combined with their wine drinking and artisanal cheese it would seem the Scythians stole a march on west coast hipsters by a good 2,000 years.

But for all their apparent barbarity in not washing properly and drinking undiluted wine and fermented yak milk, the exhibition also includes many fascinating objects (many of them on loan from Russian museums) created by the Scythians; artifacts that show off both their practical natures and creative imaginations, rich in detail and that depict the animalistic forces that clearly coursed through their understanding of the physical and spiritual world.

Their use of stones in their burial mounds to keep in the cold and help preserve burial goods means we have the rare chance to see some of the clothes and armour they wore – squirrel skin coats for example, decorated ladies’ tights, riding boots, sheepskin rugs, arrow heads and a magnificent leather headdress for a horse, topped with a ram’s head and a cockerel.

There’s a collapsible wooden table (useful for packing away when on the move), the wooden coffins in which they buried their dead, a false beard and, very prominently displayed in the marketing material for the exhbition, the metal ‘plaques’ they wore as belt buckles and jewellery.

Made from gold, bronze or iron they show what extraordinary craftsmen (and very possibly women) these ‘barbaric’ people were, capable of creating very beautiful, artfully stylised portrayals of themselves, their horses and the animals and mythical beasts that clearly held their attention, that they herded, feared and hunted and which had a special place in their religion and folklore: yaks and vultures, elk, griffins, stags and serpents, eagles, huge fish, hares, rams and panthers.

The most ghoulish items on display are the mummified head of a chief and the skin from his back (pictured left) and left-hand side, across which is tattooed the hindquarters and tail of a savage big cat (the head which was on his chest is missing sadly). Based on observations and drawings made when he was found, the same individual also had both arms and his right lower leg covered in complete ‘sleeves’ of tattoos – again beating modern hipsters to the punch by a few thousand years.

‘The BP exhibition Scythians: warriors of ancient Siberia’ is on display at the British Museum from 14 September to 14 January 2018. A few of the exhibits and images connected to the Scythians can be viewed over the following pages.

For more information on both the exhibition and the Scythians click here.

[1] See also the Alans, Sarmatians, Pechenegs, Magyars, Khazars, Huns, Turks and Mongols among others who came much later.
[2] One should not, of course, trust Herodotus implicitly.
[3] There’s a theory they may also have inspired tales of the Amazons as well.

Two gold plaques dated from the 4th to 3rd century BC, the top a belt buckle depicting a funerary scene and the bottom a coiled panther. Both are on loan from The Hermitage in St Petersburg

Top: a Scythian burial mound or kurgan in southern Siberia.

Bottom: A map showing the range of the Scythians which stretched from the Altai mountains across to the Black Sea. The area in red is the Persian Empire at its greatest extent in classical antiquity and the yellow circle indicates the area in which the Russian Tsar Peter the Great ordered excavations from which many artifacts that make up the Russian collections today are drawn from. 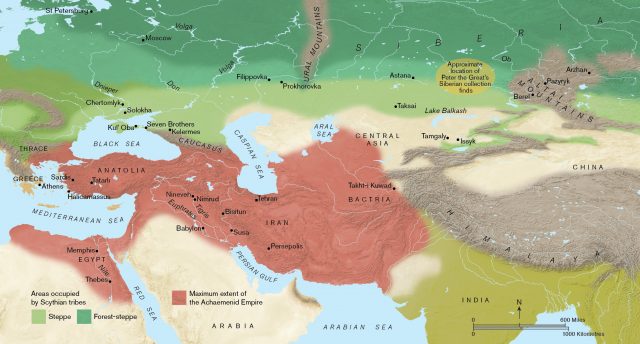