Michelin-starred chef Jason Atherton has been named as Champagne house Moët & Chandon’s UK brand ambassador for the next two years. 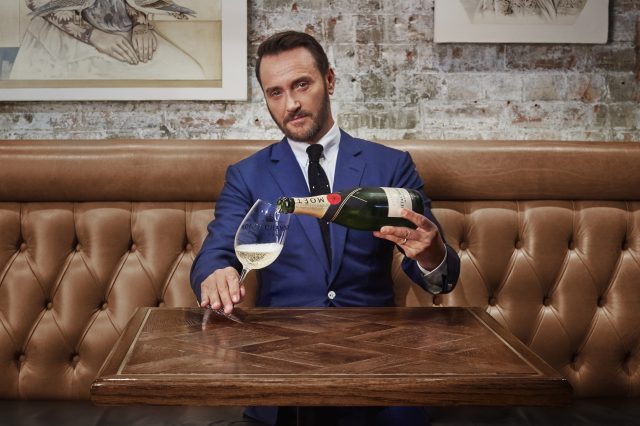 The Sheffield-born chef, who has Michelin stars at Pollen Street Social in Mayfair and City Social in London’s financial district, will collaborate with Moët’s chef de cave, Benoît Gouez, on a series of exclusive events over the coming months.

Among the collaborations will be a bespoke Grand Vintage Rosé menu due to launch early next year.

“We’re thrilled to be partnering with Jason Atherton and welcoming him into the Moët & Chandon family.

“Jason and the iconic restaurants within the Social Group share the qualities of innovation and excellence that are values of the Moët & Chandon Maison, making him a perfect ambassador,” said Julie Nollet, marketing & communications director for Moët Hennessy UK.

“Being able to combine the expertise and craftsmanship of a world-renowned chef with that of a world-renowned winemaker to create culinary experiences, is something unique and exciting and we look forward to bringing these to our consumers in 2018,” she added.

Atherton said he was “delighted” by the collaboration, having been a long-time fan of the brand.

“The Moët vintage has such depth of flavour and each release is so different; I am having a lot of fun matching our menus with the different years and looking forward to our partnership – creating exciting events and developing new ways to showcase the fantastic Moet collection,” he said.

Moët’s Grand Vintage Cuvée 2009 will be listed in a select few of Atherton’s UK restaurants from October 2017.

Atherton recently appeared in the final of Celebrity MasterChef, where the final three contestants cooked a lunch service at City Social under his watchful eye.

Prior to branching out on his own, Atherton was head chef at Gordon Ramsay’s Michelin-starred Maze in Mayfair, having previously worked under Pierre Koffmann and Marco Pierre White.