Each year the Campaign for Real Ale (CAMRA) goes in search of Great Britain’s best pubs as part of its pub of the year competition. 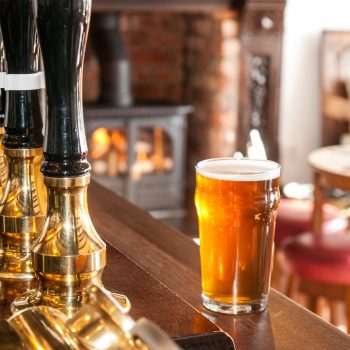 Hundreds of UK pubs take part in the competition which sees pubs judged on its atmosphere, service, value for money and community focus, with extra weighting given to the quality of their real ale, cider and perry.

Each of the pubs were judged against numerous other local branch winners and deemed to be the best in the region overall, with a perfect mix of the essential characteristics which make a great pub: atmosphere, decor, welcome, service, value for money, customer mix, but most importantly – quality real ale. They are selected by CAMRA volunteers and can all be found in the latest Good Beer Guide, which lists thousands of the top pubs across the country and a full list of all the breweries in each county.

Of the 16 regional winners, four will be named a “super-regional” finalist, for the chance to go on to be named National Pub of the Year in early 2018.

“The competition really gets difficult now, as these pubs will compete against one another to be named one of the top four in the country,” said National Pub of the Year Co-ordinator Andrea Briers. “Last year’s national winner enjoyed a huge boost in its popularity from visitors near and far, and all of the competing pubs will hope to secure national recognition from the competition.” 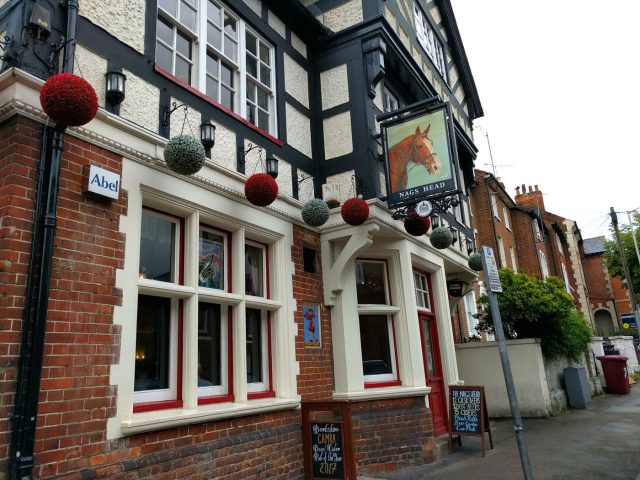 “With a wide range of real ales, ciders and perries, visitors can be sure to find something to their taste at the Nag’s Head. Its dedication to quality has made it a multiple winner of local CAMRA Pub of the Year and Cider Pub of the Year awards. A selection of board games is available for those wanting to while away a few hours. Gets busy on Reading FC match days.” 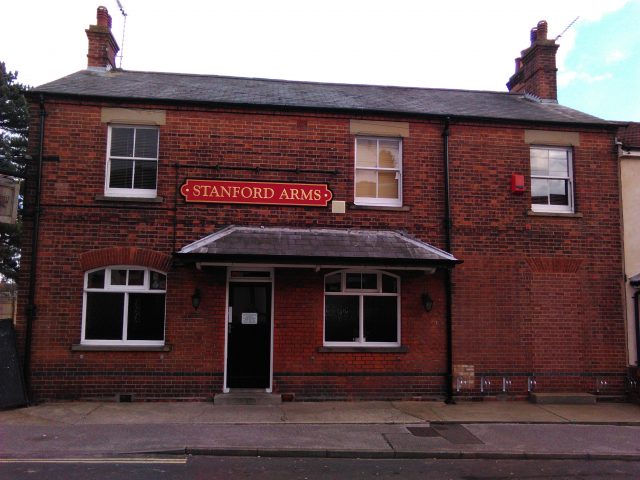 “This quality free house is a short walk from Lowestoft train and bus stations. Nicely refurbished, the open-plan, L-shaped bar has a large array of handpumps serving mainly local ales, with a fine collection of beer trays adorning the walls. To the rear is a courtyard garden with an aviary and a wood-fired pizza oven (Friday is pizza night). Wednesday is usually speciality food night (booking required) and there is live music on Sunday afternoon. CAMRA National Pub of the Year finalist 2016.” 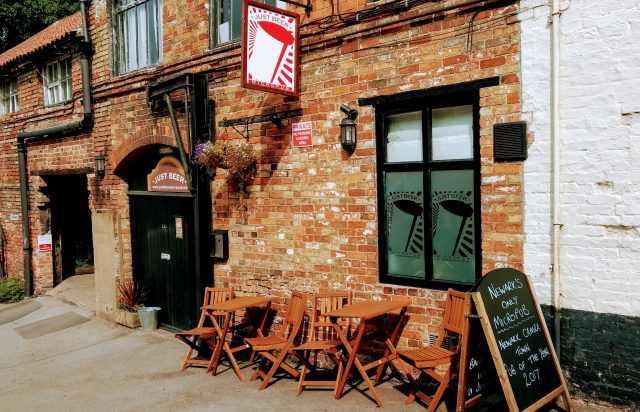 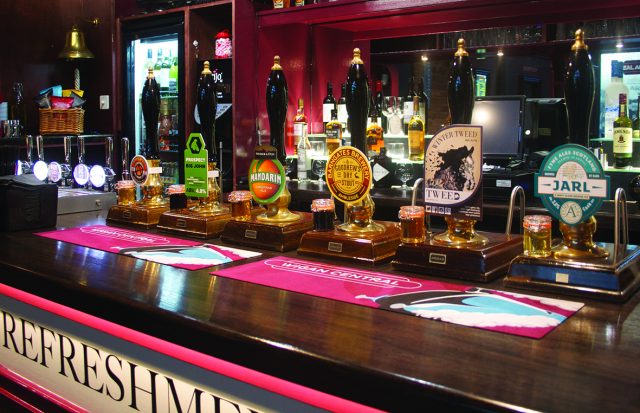 “Two-roomed pub with a railway-themed interior and a live screen displaying arrival and departure times from the two rail stations. The pub is owned by the nearby Prospect Brewery but sources real ales from all over, alongside continental bottled beers displayed in the ‘library’. Regular beer club and beer matching events are held. Live music plays in the Platform room on Sundays. Bar snacks are available. Wigan CAMRA Pub of the Year and Cider Pub of the Year 2015 and 2016.” 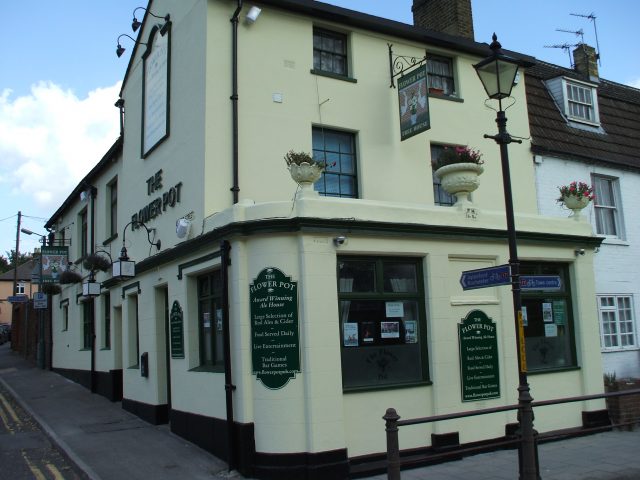 “Split-level street-corner free house, a must-visit when in Maidstone. The upper bar has nine handpumps, with the ales coming mainly from microbreweries. Up to four ciders and perries are served directly from the container. The lower bar has a pool table and there are video screens showing the beers and ciders on offer and the prices. The football ground is nearby. There are music nights every other Saturday and jam nights on Tuesdays. A beer festival is held in June.” 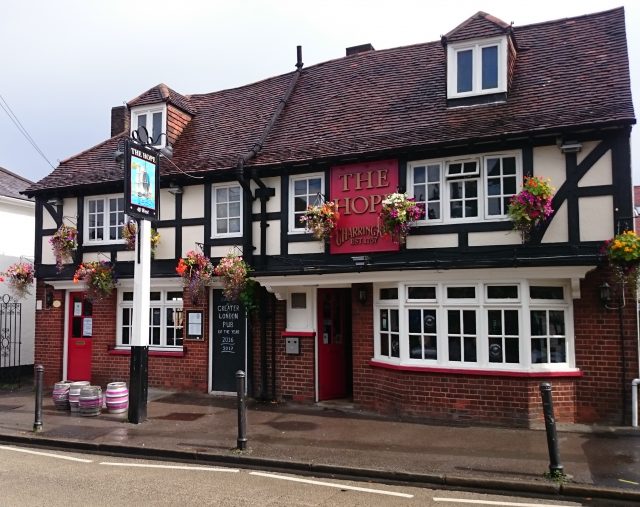 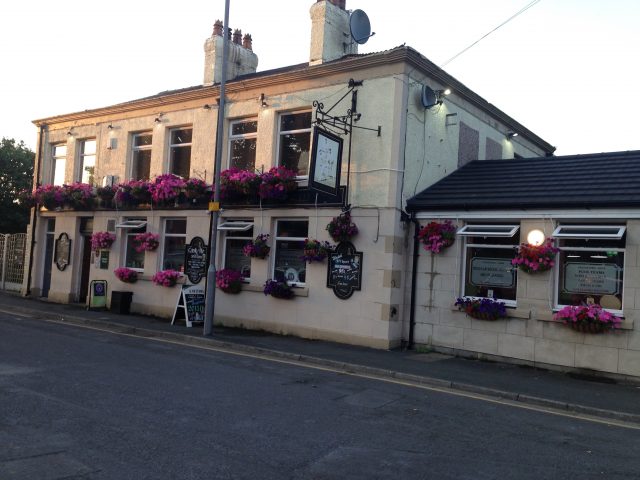 “The Cricketers has established itself as an excellent cask ale pub, with 13 handpumps on the bar. Beers come from newer regional brewers and local microbreweries. There is also an excellent selection of real ciders. This is a friendly local community pub on the edge of the town centre, hosting darts and pool teams, and entertainment at the weekend. Beer festivals are staged several times a year. It was 2014-17 local CAMRA and 2015 and 2016 regional CAMRA Pub of the Year.” 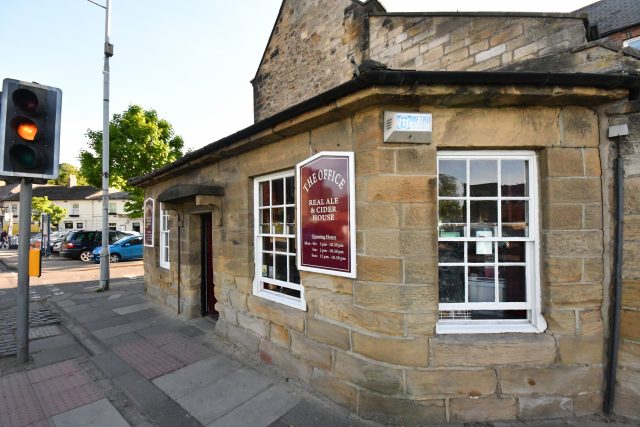 “The Office is the brewery tap for Acton Ales. It is a micropub with no music or games machines. It features five handpulls, all of local origin, and three real ciders served on gravity from the glass-fronted fridge opposite the bar. No food is available. Local CAMRA Pub of the Year 2016 and 2017.” 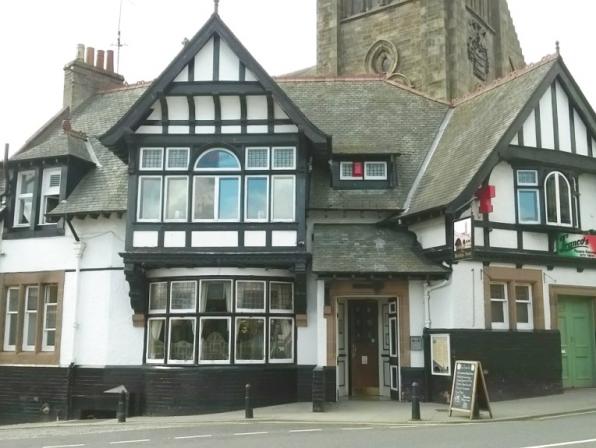 “Cheerful, welcoming, single-roomed town-centre local, also known as the Trust. The mosaic entrance floor shows it was once the Tweedside Inn. The bright, comfortable bar is decorated with jugs, bottles, memorabilia of outdoor pursuits and photos of old Peebles. An outdoor heated patio area overlooks the river. The Gents is superb, with well-maintained original Twyford Adamant urinals. There is TV sport and live music on Sunday evening. Children are not admitted. Local CAMRA Pub of the Year 2017.” 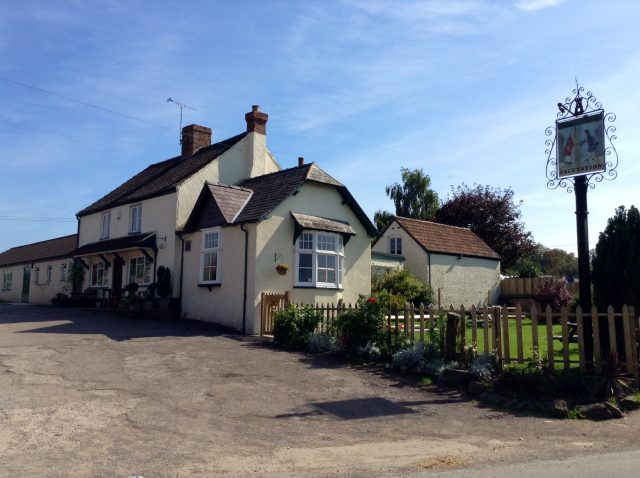 “Multi award-winning rural free house, and County CAMRA Pub of the Year again. It offers up to seven real ales, nine real ciders and perries, and a bottled beer menu. The on-site microbrewery (Tiley’s) produces hop-forward pale ales and traditional bitters. There are three bars (two cosy ones share a central woodburner) and a skittles alley/function room. Food is served weekend lunchtimes and occasional evenings only, and there are folk nights and sing-a-longs.”

“Look for the Anchor hanging outside Sussex’s first micropub. High wooden tables are arranged so customers face each other and conversation quickly flows. On offer are three ales, ciders, perry and wine, all from local producers. The ceiling is adorned with pumpclips of the many ales sold since opening. The walls have maps showing breweries and micropubs, plus CAMRA and local event information. An ale home delivery service can be accessed via the website.” 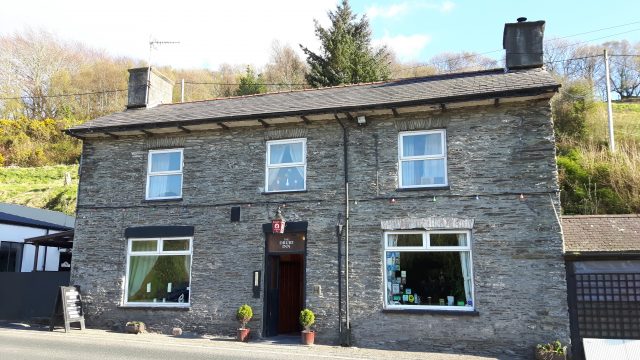 “A family-run, community pub celebrating its 43rd year in the Guide. The dining room and pool room flank the L-shaped main bar where dogs are welcome. Two guest beers are available summer and weekends plus a range of bottled real ales and ciders. Occasional music nights (sometimes with acts of more than local renown) and beer festivals are hosted. Food is popular and high quality. Buses run until early evening Monday to Saturday. A pub-owned B&B can be found next door.”

“Local CAMRA Pub of the Year 2016 and 2017, in the heart of the village around a 15-minute walk from Sutton Scotney and the nearest bus stop. Four changing beers are served, often from local breweries such as Bowmans, Flowerpots and Red Cat. Although the pub does not serve food, a fish and chip van visits on Tuesday evening, while Friday is curry night, with food delivered. A fishmonger visits on Thursday 4.30-6.30pm. There is folk music on the second and fourth Wednesdays, and a pop-up cafe usually on the third Monday of the month.” 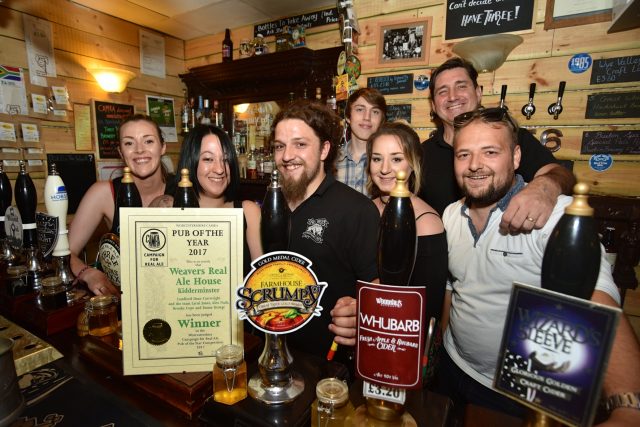 “This micropub is deceptively spacious inside, with bench seating along the sides, plenty of tables and a conversational atmosphere. Light and airy, the walls display pictures of old Kidderminster and beer memorabilia. It serves eight beers, four ciders and a perry on handpump. Cobs are always available. Just a short walk from the railway station, this is a convenient stop-off for a pint and a chat on the way into town. Public parking is a short distance away.” 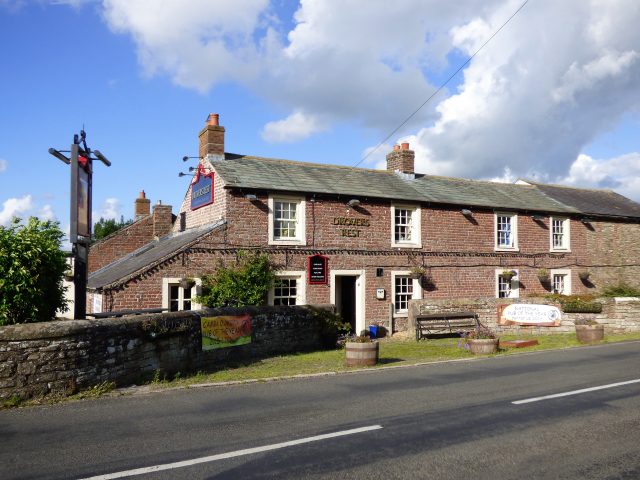 “A traditional country pub close to the popular Hadrian’s Wall path with a strong community focus. Although opened up, the interior still has the feel of three distinct rooms. The bar area is cosy and welcoming, with a roaring fire in winter. Some interesting historical State Management Scheme documents adorn the walls. The Drovers is an oasis for many different and sometimes obscure (for the area) real ales. Winner of the CAMRA super regional Pub of the Year award.” 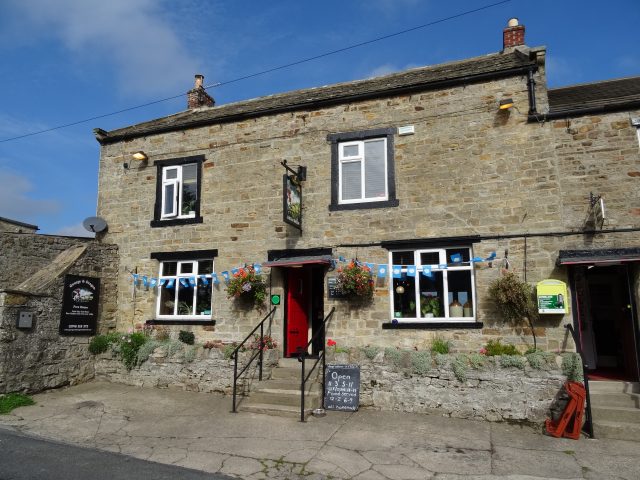 “CAMRA named this homely, two-roomed village inn its current National Pub of the Year. Rescued and refurbished in 2010 after a successful community buyout, it now features its own library, shop, allotments and other local facilities as well as great food and Yorkshire-brewed beers. Either Northallerton Dark or Rudgate Ruby Mild is always on. A large beer terrace to the rear offers stunning panoramic views over the Swale Valley. Open all day bank holidays.”