Beer Masters 2017: the results in full

The results from 2017’s Beer Masters are out, and we bring you the top medallists and overriding style trends in the category. By Patrick Schmitt MW. 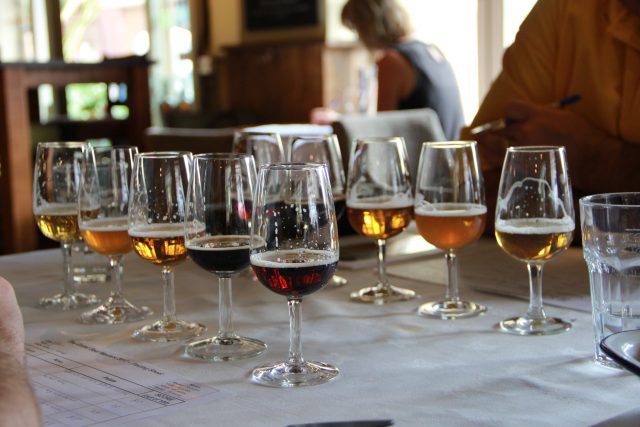 Few drinks categories have reinvented themselves as radically as beer. Formerly best known for big-brand lagers, which delivered reliable refreshment and a standard style that crossed continents, even if locally brewed, today, beer can be credited with kick-starting the ‘craft’ movement – a seismic change that sees the unusual and regionally distinct celebrated by producers and consumers.

However, with the sudden emergence of niche brewers on the market, quality is variable, and, as a consequence, in 2016 we launched The Global Beer Masters. Applying our tried-and tested formula for assessing wines and spirits to beer – which sees the drinks business blind tasting drinks according to price and style, but without prejudice about their country of origin – we added beer to our list of products, hosting an inaugural beer tasting competition in London on August last year, and repeated this year in the same month. Using a team of beer experts (see picture and caption below), we scored and discussed a wide range of beers, which were organised into broad style categories.

Furthermore, like last year, we mixed some of the biggest names in the industry within the selection of craft beers, while, as always, we made sure the judges assessed the entries for one thing: quality.

Outstanding brews
This year, it was pleasing to see a high level of brew across the board, with only a few entrants failing to pick up accolades, and a high number of Silver medals and above awarded, and, importantly two Masters – the competition’s ultimate award, which is given only to exceptional drinks.

“There are a lot of good acceptable beers on the market and a few outstanding ones which are well worth seeking out – something born out by the number of Master awards that were given on the day,” commented one of the judges, Nigel Sadler, who is a brewer, former Beer Sommelier of the Year, and vice-chairman of the Southern Section of the Institute of Brewing & Distilling (IBD).

Another judge, Shane McNamara, a Beer Sommelier and senior technical officer of the Institute of Brewing & Distilling (IBD), observed the quality seen in the competition, noting in particular the greater focus on balanced flavours among the entries. “The movement towards more balanced beers was present across the styles tasted this year and the beers that excelled were those balancing aroma, bitterness and flavour with brilliant skill and innovation to produce something that was both bold and moreish,” he said.

Freshness and balance
To consider the categories in turn, starting with the lagers, like last year, the standard was good in a beer style that can show brewing faults clearly, due to its delicate flavour. The judges were impressed by the freshness and balance in some of the larger brands, particularly the Hofmeister Helles and the Peroni Nastro Azzurro. However, it was North America’s Brooklyn Lager that took the Gold in this category in 2017 – an accolade earned by the brewery last year too.

Distance and quality
The Pale Ales and IPAs impressed the judges too, and it was this style that attracted the highest-scores of the day. “The beers that achieved exceedingly well were those that reined in the bitterness to match the fullness of the flavour in the beer yet provide a bounty of hops in the aroma,” commented McNamara. Noting the success in particular of samples from BrewDog and Pirate Life, it was pointed out that although these two brewers are based in very different climes – Scotland and Western Australia respectively – there is a connection: Pirate Life’s founding brewers Jack Cameron and Jared Proudfoot met while improving their brewing skills during apprenticeships at BrewDog. And, commenting on the Pirate Life beers, which picked up two Masters, McNamara said, “Pirate Life proves that distance is not always a barrier for freshness and quality.”

Indeed, speaking more generally about this issue, he said, “The reverence of quality and logistical care taken by brewers, in particular craft brewers, for their beers to arrive in faultless condition was clear in the tasting. The freshness of the bottled/canned beers from the likes of Brooklyn Brewery (United States of America) and Pirate Life (Australia) was impressive and is something to admire. Beer for the large part is a quickly deteriorating beverage best enjoyed fresh and doesn’t take kindly to temperature shifts or even sunlight – keeping it tasting fresh is no mean feat.”

New World hops
But to return to the subject of style, another judge, Ian Swanson, who is a Cask Marque assessor, Beer Academy tutor and trade quality brewer for Diageo in Africa, said that he enjoyed the New World hop influence, but felt that its powerful impact may be dominating the market. “I liked some of the beers using New World hops,” he said, “but there were just too many of them!” Continuing, he noted that the tasting “Confirmed my view that there is an over-reliance on New World hops – it is harder to hide brewing faults and lose fermentation flavours (good and bad) using mainly English hops.” As a result, he mourned, “It is getting harder to find a classic ‘English Ale’.”

Similarly, but more cryptically, Sadler said having finished the tasting, “There is a beer to suit everyone and not all styles are to the liking of all: some areas are very narrow and repetitive with some brewers but if that’s their reputation then so be it.”

Dark beer brilliance
But to finish on the positive, an area that also stood out for quality was dark beer. “This year the dark beers were a very strong category across the board,” said McNamara. “Bold balanced flavours were matched with finesse and intrigue for the drinker … the biscuit, rich cocoa and chocolate flavours were integrated well with coffee undertones and hints of vanilla in some.”

And, notable among these brews was the Cream Stout by St. Peter’s Brewery, which he described as “delightful with every sip”. And it is, of course, an ability to sustain such gratification that’s the hallmark of a great beer, whatever the style.

Over the following pages are the beers that did best in the tasting.

About the Global Beer Masters

The Global Beer Masters is a competition from the drinks business and an extension of its successful Masters series for wines and spirits. The best beers were awarded medals that ranged from Bronze through to Gold, as well as Master, the ultimate accolade, given only to exceptional beers in the tasting.

The beers were judged by a cherry-picked group of beer experts on 15 August at the Brewhouse & Kitchen in Islington, London.