Delhi man gets a hole in his stomach after drinking cocktail

A 30-year-old man from Delhi has ended up with a hole in his stomach after downing a cocktail without waiting for the liquid nitrogen to dissipate, reported Hindustan Times. 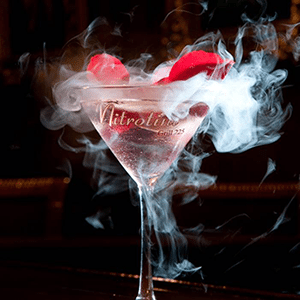 Not knowing that the cocktail was meant to be drunk after the ‘white smoke’ had subsided, the man downed the cocktail in one go. After feeling extreme pain, abdomen swelling and breathlessness, the man was rushed to a hospital where the doctors described the hole in the stomach to be “open like a book”.

“When I gulped down the drink, I started feeling very uncomfortable, like how you feel when there is an acid reflux. The bartender passed me another drink and I had it, not thinking too much about the discomfort. However, within seconds, my stomach started swelling and I was in unbearable pain. Breathing was also difficult,” the man told the newspaper.

Similar incidents with liquid nitrogen have occurred before back in 2012 in the UK when a 18-year-old teenager had to have her stomach removed after drinking a cocktail containing liquid nitrogen.

Having a boiling point of -195.8°C, liquid nitrogen is often used in food and drinks such as ice cream, or for medical purposes, for example to remove warts and cancerous tissues by freezing them. When used to freeze drinks, the beverages should only be consumed after the nitrogen has completely evaporated, otherwise the extreme cold can cause freeze burns to the mouth, throat and stomach.