Black Tower, the iconic German wine brand, is celebrating its 50th anniversary this year with a limited edition anniversary bottle and a new integrated PR campaign in the UK. 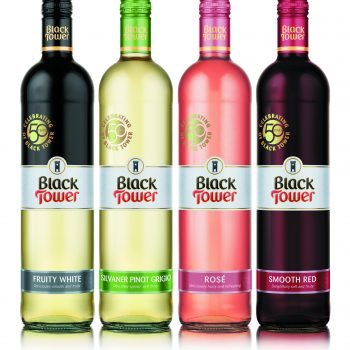 The special anniversary bottles are celebrating the significant milestone by including a new gold anniversary crest on the front of the bottle. The celebratory bottles is being used across the brand’s Fruity White, Silvaner Pinot Grigio, Rosé and Smooth Red as well as its low alcohol and low calorie wines in the B by Black Tower collection.

The limited edition bottles are now in store at Sainsbury’s, Asda, Tesco and Morrison’s.

As part of its landmark year, the wine brand has also unveiled a new creative platform across the UK that is intended to speak to a new generation of consumers through social media and an “influencer first approach”, primarily lifestyle bloggers and instagrammers. But the campaign will also encompass trade advertising, press, sponsorship and run direct-to-consumer sampling.

Called #CheersToMe, it will champion the everyday moments and achievements of consumers that are often overlooked but should be celebrated – be it leaving work on time, getting the kids to bed early or beating a personal best at the gym. The campaign will encourage them to raise a glass to their own personal successes.

Alexander Rittlinger, MD of Black Tower’s producer Reh Kendermann, said the brand had stayed ahead of the curve in an ever-changing and competitive industry by listening to its customers and responding to the changing wine preferences of both new and long standing customers.

“Looking ahead to the next 50 years, it’s important to remain authentic, relevant and true to the brand’s heritage and we firmly believe that the #CheersToMe platform embodies this and is exactly what Black Tower represents,” he said.

The brand was launched in 1967 but said it has continually invested to evolve its look and feel to stay fresh and relevant, as well as investing in cutting-edge wine-making techniques.

The 50th anniversary celebration are set to be a key plank for Reh Kendermann at this year’s ProWein and it is introducing a host of brand extensions, including a Black Tower Sparkling ICE White and Rosé, a Black Tower Blush and Sauvignon Blanc and a new alcohol-free variant, B Zero by Black Tower. It will also present a cross-section of its portfolio, including the recently launched B Fruitiful and the relaunched Kendermanns brand.