Alcohol-free wine brand Eisberg is rolling out two new sparkling wines in the UK as it looks to reposition the brand and tap into the drive for healthy lifestyle among millennials. 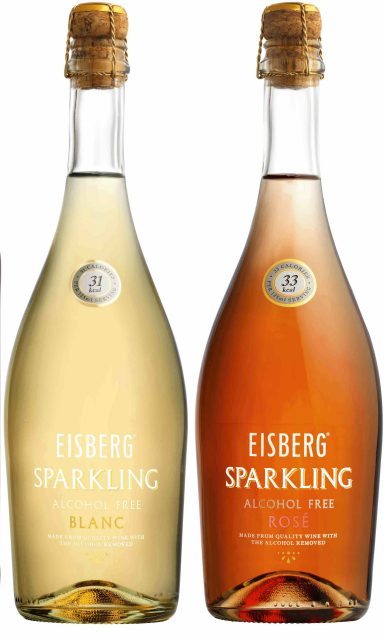 The two new sparkling wines comprise a white wine that has a Prosecco-like taste profile, and a rosé in a “Californian Zinfandel strawberry style”. They were soft-launched into Ocado (RRP: £4.00) and will go into Tesco from next month.

Andrew Turner, director of wine at brand owner Halewood Wines and Spirits, said the npd (new product development) was a ‘logical step” for the brand and tapped into the growth of sparkling as a destination category.

“We saw that this was a different occasion, not just time for a new varietal,” he said.

The two wines have been developed specifically for the UK market and also designed to appeal to younger consumers, who Turner said are more ‘open and receptive” to no- and low-alcohol wines.

Previously the brand had developed more “female-orientated” marketing to appeal to pregnant mums-to-be and people watching their calorie intake, and though Turner says these are still important consumers, consumer research and sales data pointed to a shift in the brand’s shopper demographics.

“The interesting thing to come out in our consumer research is that although Eisberg much appeals to a broad range of people, it appeals for different occasions due to different decision driver for different demographics,” he said.

“Younger people are more receptive to a wine-like product that is alcohol-free whereas many older consumers ask ‘What is the point?’” he explains.

“The challenge of the product is how do you appeal to the target audience and a wider audience at the same time? So we needed to focus on it to bring it to the attention of a far wider audience.”

The people buying it more frequently are men under-35, the sales data found, with younger consumers seeing it as part of a far wider repertoire.

“Generally people who were health conscious, who still wanted to feel included – something that is really important – and the designated driver. So when we started, we wanted to focus on that occasion.”

It is, he argues, something that has been gathering pace and it was important to generate brand awareness without being “preachy”.

These have therefore become the main marketing ‘pillars’ behind the brand, and lay behind the decision to sign a three-year sponsorship deal with the Tour of Britain last September.

Tastings at the event also gave the brand the opportunity to carry out sampling across around 10,000 people, Turner said, which had highlighted the problem of many shoppers not being able to find the category in store. However Tesco is currently mulling the roll-out of a dedicated new no/low alcohol bay, which would make it easier for consumers to find the category in-store.

The no- and low-alcohol category is in growth, the latest Nielsen data has show, with values up 39% in the 52 weeks to 10/09/2016. Eisberg, which has a 52% share of the market, was ahead of the market, seeing sales up 40% over the same period, but Turner said the company recognised the importance of keeping that level of momentum.

The new sparkling joins the existing four-strong range which comprises a Chardonnay, Sauvignon Blanc, rosé and a Cabernet Sauvignon.