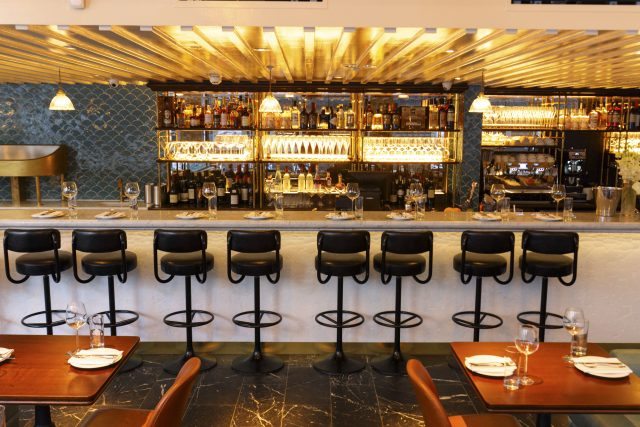 The concept: A few years ago when I interviewed restaurateur Simon Mullins, he let me into a secret – that he’d long dreamt of opening a Venetian restaurant in London but felt that rival Russell Norman had pipped him to the post with his wildly successful cicchetti chain Polpo.

Fortunately for us, Mullins refused to give up on his dream, which materialised in late 2016 in the form of Veneta, a 110-cover Venetian-inspired site nestled within hip new restaurant hub St James’s Market just off Regent Street.

You’ve probably dined at a Mullins restaurant without evening knowing it. Opening Spanish tapas joint Salt Yard on Goodge Street in 2005, along with Barrafina’s Hart brothers, he was one of the first to champion sharing plates in the capital. Sister sites Dehesa, Opera Tavern and Ember Yard soon followed.

The décor: Visiting on a Friday night, there wasn’t a spare seat in the house, giving the restaurant the kind of animated buzz other sites wish they could bottle. Set across two floors, action at street level is centred around the bar, which boasts fan-shaped tiles in tasteful teal.

Frilly glass lamps hang from the ceiling in a nod to Venice’s much desired Murano glass, while oil paintings of soothing seascapes adorn the walls.

The food: When creating the menu, chef director Ben Tish and head chef Jamie Thickett took inspiration from Venice’s past as a major maritime power and a pivotal player in the transportation of spices throughout Europe.

While the majority of the dishes are distinctly Italian, others have North African and Middle Eastern influences, such as a charming plate of succulent chicken braised in almond milk that arrives festooned with almonds and Medjool dates and drizzled in a sunshine yellow saffron sauce.

I never usually order chicken as it seems like a safe option, but this dish blew me away with its sweet-savoury interplay and rich Moorish flavours.

Another triumph was a trio of creamy burrata and sheep’s ricotta ravioli in an earthy, hazelnut-flecked porcini sauce that left my friend and I fighting for the last one. Equally, a steaming bowl of mussels forced us into a battle for the best bit – a heady, salt-charged, vermouth, ginger, cinnamon and celery broth. Cue clinking spoons.

Signature dishes: All dishes are designed to be shared, and Veneta’s menu is so darn inviting, it requires superhuman levels of restraint not to over order. Among the must try dishes are a quartet of impossibly silky scarlet red raw prawns redolent with rosemary.

Another hit for those seeking comfort is a golden dish of creamy, Parmesan-laced polenta dotted with earthy girolles that doubled as decadent central heating on a chilly January night.

Those with a sweet tooth need to try the warm chocolate ganache with orange curd and hazelnut brittle. Molten at its core, the richness of the chocolate is enlivened and lifted by the citrus twist in a gourmet take on a Terry’s Chocolate Orange.

The drink: For a wine lover, the drinks list is a thing of beauty. It begins with a selection of G&Ts made with Italian gins.

The Gin Monsieur, laced with Gin à la Madame made by Rome speakeasy The Gerry Thomas Project, comes highly recommended with its fresh aromas of cardamom, chamomile and orange.

On the wine front, Italophiles are spoilt for choice with expertly picked drops that showcase the best of the north, taking in Trentino, Alto Adige, Lombardy, Piedmont and the Veneto.

We began with a glass of golden Marchesi di Gresy Chardonnay 2014 from Piedmont, which revealed itself in lavish layers of lemon, toasted almonds and hazelnuts.

We were then charmed by a hauntingly beautiful glass of Luca Roagna Pajé Barbaresco 2010, which was alive with aromas of earth, roses, black cherries, raspberries, plums and liquorice in an elegant but powerful ensemble.

Who to know: Head sommelier Daniele will keep your glass topped up all night. If you ask him nicely, he might let you try a glass of something that’s only usually available by the bottle. As the evening drew to a close he presented us with a tumbler of Islay cask-aged vermouth, whose punchy, peaty nose gave way to a delicate, fruity palate.

Don’t leave without: Scouring the room for celebrities – on our visit we dined next to Wolf Hall star Mark Rylance, who kept his hat on.

Last word: This review may seem overly gushy, but it’s genuinely hard to find fault with the place. From the friendly, clued-up staff, to the buzzy atmosphere via the divine wines and food that succeeds in balancing fresh flavours with creamy, comforting ones, any lover of Italy needs to visit Veneta at least once.