Made with the finest spirits and garnished with either ice and a slice, or a perfect diamond, the world’s most expensive cocktails don’t come cheap. 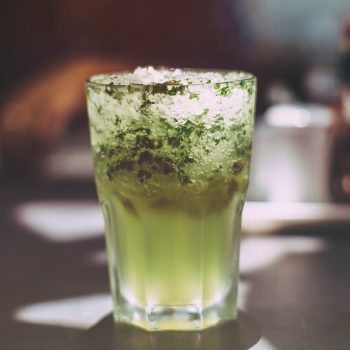 Have you ever found yourself at a middle of the road bar, ordering what will no doubt be an average cocktail, only to receive a bill for $20 or more? Nightmare.

Just imagine being in a similar situation, only to receive a bill of up to $40,000. Thankfully though, in each of these cases the bar is top notch and with a painful price tag comes a very soothing drink.

With 18k gold goblets, Mont Blanc cufflinks, diamonds and rubies on the table (or in the glass), we had a look through the world’s most expensive cocktails to decipher what really makes them so special. I for one will be checking my cocktails carefully from now on, for fear of swallowing a gemstone by mistake… 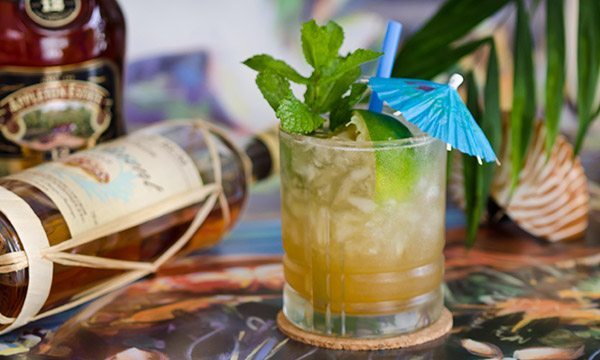 This cocktail, served at the Merchant Hotel in Belfast, is made with the same Wray and Nephew Rum that was used for the first Mai Tai ever, by Victor J. Bergeron in 1944. With both white and dark rum, orange curacao, Orgeat syrup and fresh lime juice, it’s served on the rocks with a lime wedge. A bottle of just 750ml of the original rum will set you back $31,000.

9. Sidecar – The Ritz in Paris 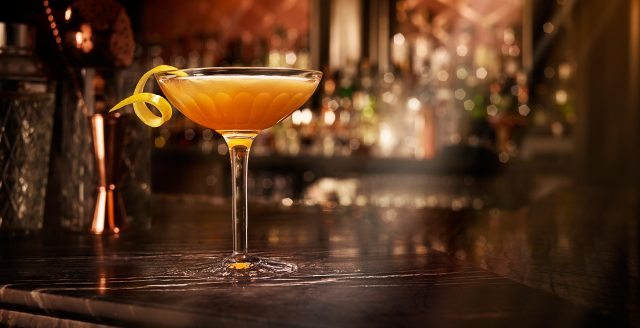 This is without a doubt the most classic of all the cocktails on the list. Worthy of the glamour of a modern-day Gatsby, hidden away at the famous Bar Hemingway you will find the Ritz’ famous take on a Sidecar. Made of 1865 Ritz Fine Champagne Cognac, Cointreau, and a dash of lemon juice, it’s not for the faint-hearted or the frugal. Originally created in 1923 by chief barman Frank Meier, it survived both the pestilence of 1870 and its attempted theft by German soldiers during WWII. 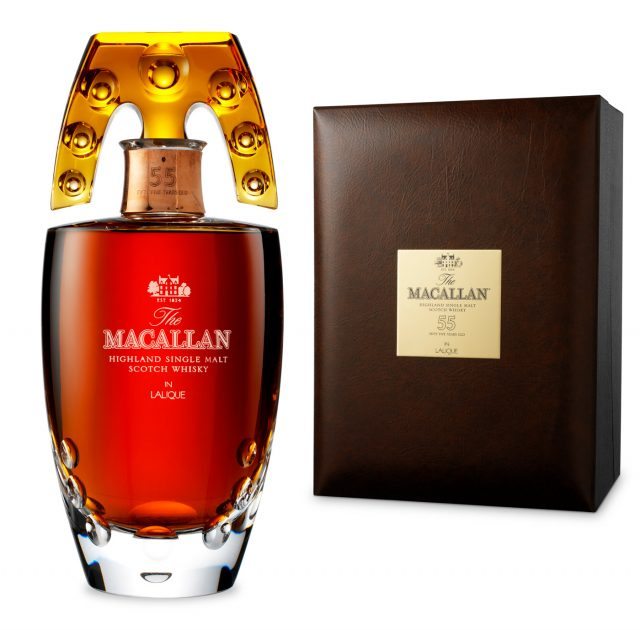 Less of a cocktail, more of a commitment, the luxurious single malt used in this mix is served from a Lalique bottle.

The drink is made of Macallan 55-year-old single malt natural colour whisky, combined with dried fruit bitters and a homemade passion fruit sugar. It’s served over ice cubes that are made of the very water that runs through the Macallan distillery, and mixed with a custom stirrer from a Macallan oak cask. Last but not least, it’s presented in an 18k gold goblet, which you get to take home. And thank goodness you do, otherwise it might have been a waste of money. 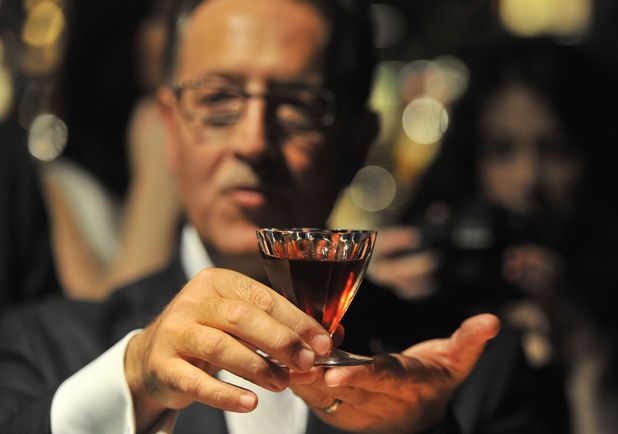 In a Guinness World record attempt in October 2012, this cocktail was created by master bartender Salvatore Calabrese at The Playboy Club in London. Its astronomical price comes from the decadent ingredients used – a 1778 Clos de Griffier Vieux Cognac, a 1770 Kummel liquer, an 1860 Dubb Orange Curacao and a tiny bottle of 19th century Angostura bitters.

This is also believed to be the oldest cocktail in the world, with the ingredients having a combined age of 730 years. During an attempt on the same record earlier in the year, a ‘priceless’ bottle (read: $60,500) of the same Clos de Griffier Vieux was dropped, and smashed.

The ‘museum cabinet’ at the bar contains more than $1.2million worth of vintage cognacs. 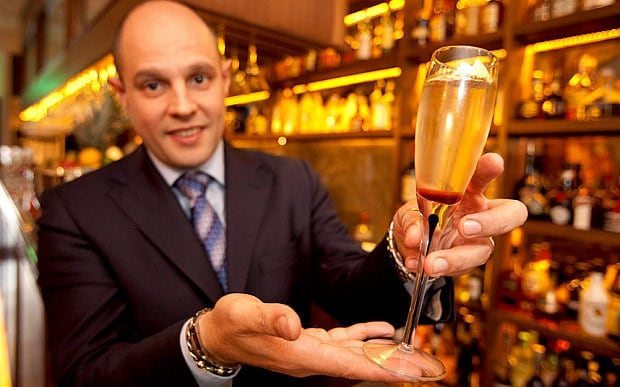 While it doesn’t quite live up to its original name of ‘The Most Expensive Cocktail in the World’, this take on a Champagne cocktail is definitely worth its salt. Served at Gigi’s in London’s lavish district of Mayfair, it uses a 1990 vintage Cristal and an 1888 Samalery Vieille Relique Vintage Bas Armagnac, and is finished off with a sprinkle of gold leaf flakes. Drink like King Midas, and like Grace Jones, who the drink was originally created for.

Perhaps rather sensibly, to order this liquid gold you have to pay in advance, to avoid the most unsightly of situations in which ones credit card is declined… 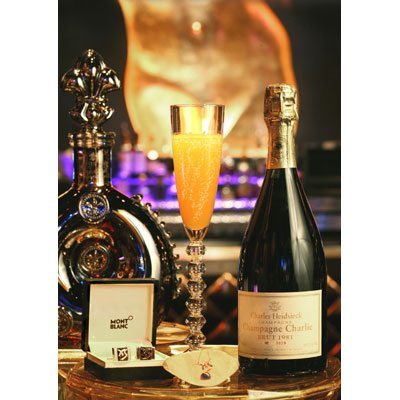 Another one aimed squarely at the romantics among us, this champagne-based cocktail-for-two comes with both a set of Mont Blanc cufflinks and an 18k gold, diamond and pearl necklace.

The gems aren’t the only extravagance served with your glass though, as the cognac used, Rémy Martin Louis XVIII Black Pearl, sells for over $2,000 a shot. Topped up with Charles Heidsieck 1981 “Champagne Charlie”, Sence Rose Nectar and both freshly squeezed orange juice and apricot purée, it’s served by a fleet of 20 waiters, with sparklers. Not one for the introverted. 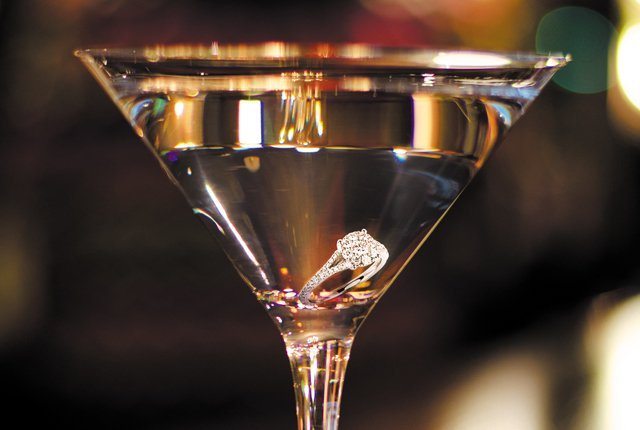 It isn’t often that you have to place your drink order 72 hrs in advance, but it’s also true that not many cocktails come complete with a custom-made diamond engagement ring, either.

After a consultation from the Swiss jeweller, and co-owner of Uncorked, Andy Goetz, the bar will pop your ring into what we’re sure is an at least above average Martini ready for a lavish surprise. 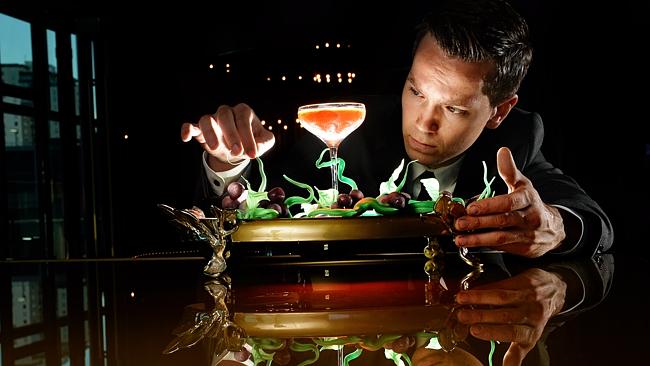 Named after Winston Churchill and served at a club owned by cricketer Shane Warne, this understandably all-star cocktail takes two days to make – and we thought the wait at our local on a Friday night was bad enough.

The hefty price tag comes from the inclusion of an 1858 Croizet cognac, a bottle of which sells for $157,000, with shots selling at $6,000. It also includes Grand Marnier Quintessence, Chartreuse Vieillissement Exceptionnellement Prolonge, a dash of Angostura Bitters and is garnished with chocolate nutmeg dust. 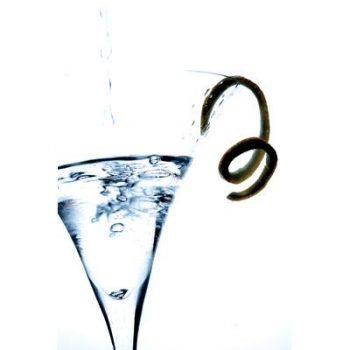 Much like its cousin with the same name, the Tokyo edition of the Diamond’s Are Forever Martini is served complete with a diamond ‘garnish’, as described by the hotel itself: however this time you can sip on a flawless loose 1-carat diamond, not set in a ring.

Bearing in mind a 1-carat diamond is, on average, just 6.5mm wide, when bought as a surprise lets hope no one mistakenly takes a swig of their fancy drink and downs the diamond in the process.

The cocktail itself is made up of Grey Goose vodka with a lime twist, and as if the rock weren’t enough the live band will also play the Shirley Bassie classic Diamonds are Forever when they bring it out. Just for that extra touch of class.

Tokyo is sometimes called the world’s most expensive city, and it seems that the cocktail list lives up to its name. 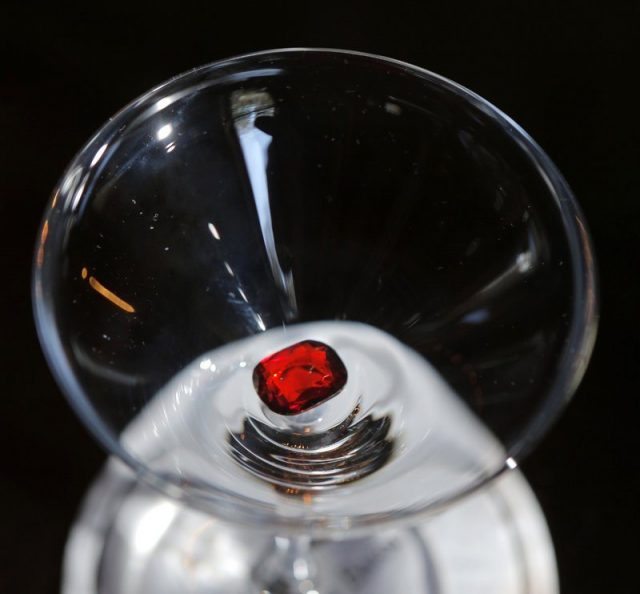 Forty thousand dollars. If you happened to have such a sum spare, you could choose to spend it on any number of things. A down-payment on a house. An all-inclusive holiday to Mauritius. You could buy a Mercedes-Benz C-class outright, or 1,333 bottles of Grey Goose vodka.

Alternatively, back in 2013 you could take a trip to the White Barn Inn in Kennebunk, Maine, and celebrate their 40th birthday in style.

Consisting of Hanger One Vodka, St. Germain Elderflower cordial, freshly squeezed grapefruit and pomegranate juice, and a spoonful of rosewater, this one-of-a-kind cocktail was served throughout their anniversary year, topped off with a 4-carat ruby.

The ruby red drink seemed the perfect complement to the gemstone, which also symbolises a 40 year anniversary in marriage and other pursuits.

In case rubies just aren’t your thing, you can also order the cocktail without the sparkling final touch. For $18.