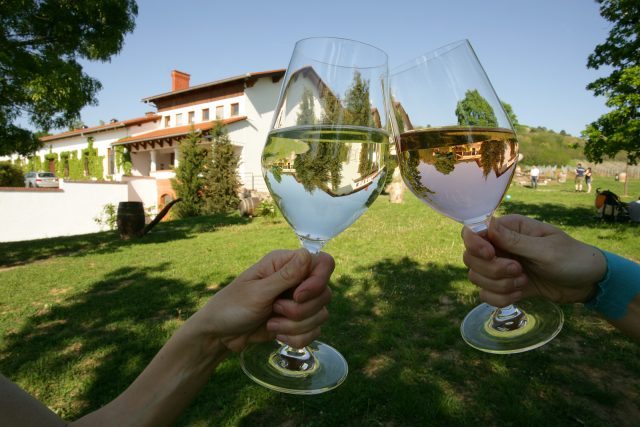 Just before Christmas I visited the southern Hungarian winemaking town of Villány with Wines of Hungary to attend the 2016 Franc & Franc conference – Villány’s concerted effort to convince the world that it is the adoptive home of Cabernet Franc.

You can read an overview of the trip here. In this article I want to focus on a selection of the more terroir-focused producers whose wines really stood out on that trip – and who I believe have the best chance of succeeding in the fiercely competitive UK market.

One of the over-riding impressions I took from the Franc and Franc conference and associated tastings was that, in many cases, there was a marked overuse of oak. I tasted around 30 premium Villány Cabernet Francs in which it seemed the norm, rather than the exception, for the wines to be aged for 24 months in oak – very often new – before release.

On top of this, some of the wines were very ripe, alcoholic and extracted, which made them a challenge to drink. While these kinds of wine do enjoy strong demand in the local market, there are question marks over their potential for success in the UK market, where the overarching trend is towards fresher, lower alcohol, less obviously oaked styles of red wine (reds being the specialty of Villány).

“If you look at global trends in winemaking there is definitely a move away from too much obvious oak,” Caroline Gilby MW, an expert on the wines of the region, told the conference.

“It also makes financial sense if you use less oak for a shorter time. And if you’ve got really nice fruit, why hide it with too much oak?”

Thankfully, such wines were not the whole story of my Villány visit – far from it. Throughout the four-day trip I took note of a good number of wineries which seemed to demonstrate restraint in their use of oak, which were focusing on terroir and indigenous varieties, exploiting cooler sites (Villány is one of the warmest regions in Hungary), and working with precision in the vineyard and cellar to produce red wines of clarity, restraint and freshness.

In the pages that follow are profiles of six such wineries which, in my opinion, represent a good starting point for anyone interested in discovering the wines of this still under-appreciated region. 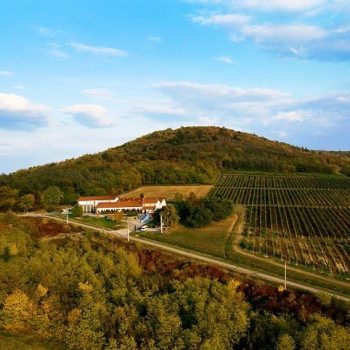 Surrounded by its Dobogó vineyard, Vylyan winery is located on the slopes of Fekete-hegy (Black Hill), close to the village of Kisharsány.

The estate was established by Pál Debreczeni in the early 90s. A pioneer of Villány winemaking in the early post-Soviet days, Pál tragically died in a car accident in 2004. Since then his wife, Mónika, has been in charge, achieving a string of accolades with her winemaker, Istvan Szabó, in the intervening years.

Vyyan’s ‘icon’ wine, Duennium, is a Bordeaux blend only made in outstanding vintages.

Since 2011, Mónika Debreczeni says she made a much more conscious effort to promote freshness in Vylyan’s wines. The house style has certainly changed.

“In the 90s the fashion was the more heavy style with more wood,” she told db.

“I was always heading towards the elegance and the freshness. And if you taste our wines you feel it. It’s very important for us to go in that direction, starting with the date of the harvest, not over-macerating, keeping [the must] cool, keeping the wine in oak for shorter time and not only in new barrels, so not to cover the fruit.” 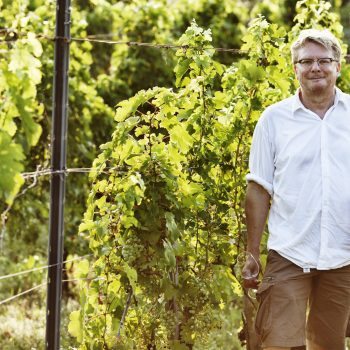 Founded in 1998 by part-time Berlin lawyer Horst Hummel, Hummel Winery has been working organically since 2008 and has been certified as such since 2009. Horst Hummel has been using biodynamic preparations in the vineyard as of the 2016 vintage – making Hummel one of only two biodynamic wineries in the Villány region (the other is the Demeter-certified Wassmann).

Hummel’s vineyard area extends to just 7.5ha with Portugieser (he makes some quite serious wine from this grape), Kékfrankos, Merlot, Cabernet Sauvignon and Cabernet Franc the focus from the vineyard areas Villany Jammerthal, Nagyharsány Várerdö and Nagytótfalu Verebes-rét.

A committed terroirist, Hummel uses only spontaneous fermentation and no additives except a small amount of sulphur dioxide in his wines. While there is obvious concentration there, these are distinctively fresh, high-toned, supple wines. 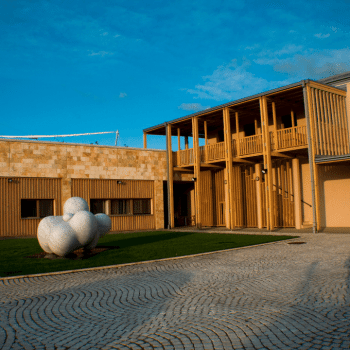 In 1999 Christian Sauska, a rags-to-riches entrepreneur who made a fortune in engineering business in California, set out to establish a winery in his homeland. In 2000 he converted a historic building in Tokaj into a production facility and tasting room. This was joined in 2006 by a new winery in Villány. Red varieties are grown in Villány, whites in Tokaj.

You get the impression that Sauska is seen as something of an interloper in Villány by the hard core of winemakers who have built up the region’s name since the fall of communism. Not that that matters from a wine perspective. Sauska has wasted no time in establishing a forward-thinking business very much geared towards the international market. With a gravity-fed winery, uncompromising grape selection and wild yeast fermentation the norm, all Sauska wines are characterised by precision, typicity and elegance.

Slick, minimalist labelling, a super-clean, state-of-the-art winery (where they use special lamps made by Christian Sauska’s bluechip lighting company, Light Sources, to clean their barrels) and, crucially, a very engaged, young, largely homegrown winemaking team for whom innovation in technology and experimentation in winemaking are of paramount importance (eg, experiments with amphorae-style vessels for fermentation and ageing of fruity varieties such as Kadarka, Kékfrankos and Portugeiser) – these things mark Sauska out as one of the most dynamic wineries in the region. 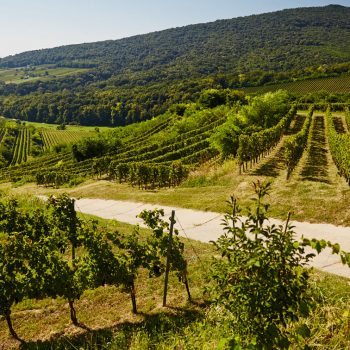 One of the most respected winemaking names in Villány, and indeed Hungary, Attila Gere leads a seventh-generation winemaking family. During the communist era the Gere family’s vineyards were nationalised. Then after the collapse of the communist regime at the beginning of the 90s, family winemaking enterprises re-appeared in Villány. Gere was one of the first.

Gere winery consists of 70ha of vines on some of the most highly prized slopes of Villány – Kopár (one of the best sites for Cabernet, used for Gere’s flagship ‘Kopár’ cuvée  – predominantly Dolomite limestone and used for vine-growing since Roman times), Konkoly (loess and red clay on Dolomite limestone; slightly higher, and cooler, than Kopár),  Ördögárok (similar to Konkoly) and Csillagvölgy (humus carbonate soil on limestone base).

In 2002 Gere opened built a new winery and cellar, and the family’s commitment to producing fresh, refined, terroir-focused wines for the modern international market is very apparent. Attila Gere’s daughter, Andrea, is an energetic and highly effective spokesperson not just for Gere Winery but for the Villány region as a whole.

While Gere’s wines can be very powerful (eg, Kopár), clearly a lot of care is taken to ensure balance, while respect for nature, organic farming (fully organic since 2010), careful control of picking and grape selection all contribute to producing wines that express the Villány terroir very well.

Gere has made its name producing premium Cabernet Franc and Bordeaux-style reds, however it is also conducting some very interesting experiments with rare indigenous varieties. One such is Járdovány, a light Nebbiolo-like red of which there are fewer than 2ha in existence – all owned by Gere. Made for the first time in the 2012 vintage, this is a wine which shows great potential. 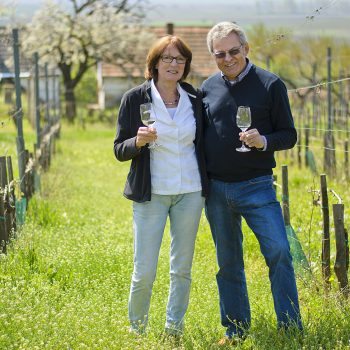 Swiss-German couple Erhard and Evelyne Heumann founded Heumann winery in the late 90s and have consistently sought to promote the terroir of the Villány-Siklós sub-region.

This is the region to the west of the village of Villány, where the soils are characterised by deeper and closer-to-the surface seams of limestone (Erhard Heumann reports that in Villány the limestone is up to 15m below the surface; on the plateau in Siklós, where his vineyards are located, just 1m), and where temperatures are significantly cooler than the main Villány vineyard areas, contributing to the fresh acidity and vibrant fruit which tend characterise wines from the area.

“You get more acidity here,” he explains. “There further east you go the broader the wines are, so a lot of people think this is Villány terroir – bold, very often over-extracted, very often excessive use of oak…”

When it comes to oak, Heumann avoids new barrels altogether, opting for fourth-use Hungarian 225L and 500L (depending on the grape) barrels to promote fruit and terroir expression.

The main focus for Heumann is Kékfrankos. He’s also makes high-quality Syrah and Cabernet Franc, as well as Riesling and Chardonnay. 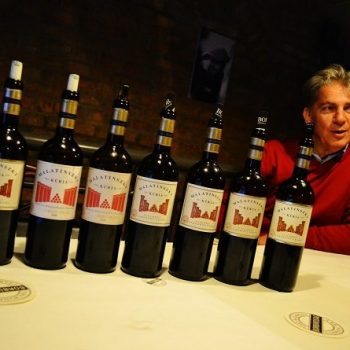 Former sommelier Csaba Malatinszky is another winemaker based in Villány-Siklós. He was one of the most enthused-about winemakers at the Franc and Franc conference. Where so many Villány winemakers seemed so focused on oak and oomph in their Cabernet Francs, here were wines with depth, poise and good varietal expression.

One of the first winemakers in the Villány region to build a state-of-the-art winery. Malatinszky works organically from 30ha of vineyards and is focused principally on Cabernet Franc.

His flagship Kúria range, which includes his varietal Cabernet Franc as well as Merlot and Cabernet Sauvignon in various iterations, particularly impressed attendees of the conference, standing out for its elegance, definition and judicious use of oak. Malatinszky only uses (high-quality Hungarian oak) barrels which have been naturally seasoned for three or four years before use.