Jason Atherton’s The Blind Pig cocktail bar in Soho has launched a drinks menu inspired by children’s classics like Winnie-the-Pooh, Peter Pan and The BFG. 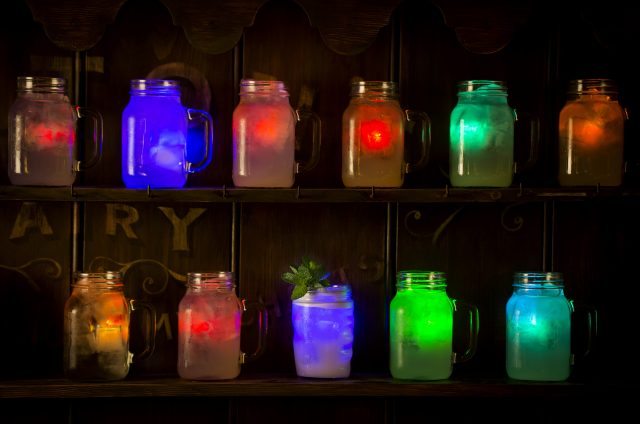 Playing heavily on nostalgia for a simpler, more innocent time in our lives, each cocktail comes with an illustration by Masha Karpushina that captures the essence of the book it’s inspired by. The menu itself is designed to be read like a bedtime story book.

“Everyone has a favourite story from their childhood, so the idea for this list was to capture these shared memories and bring them to life with a playful yet grown-up twist,” said Jamie Jones, global bars executive for Jason Atherton.

The menu launches on 23 January. Click through for a sneaky peak at each of the 10 cocktails on the list and their recipes. 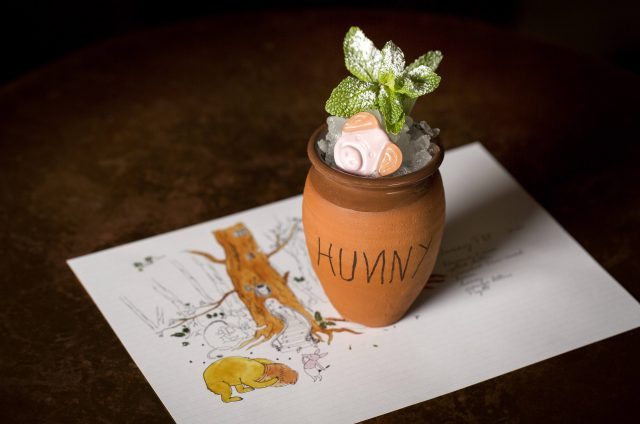 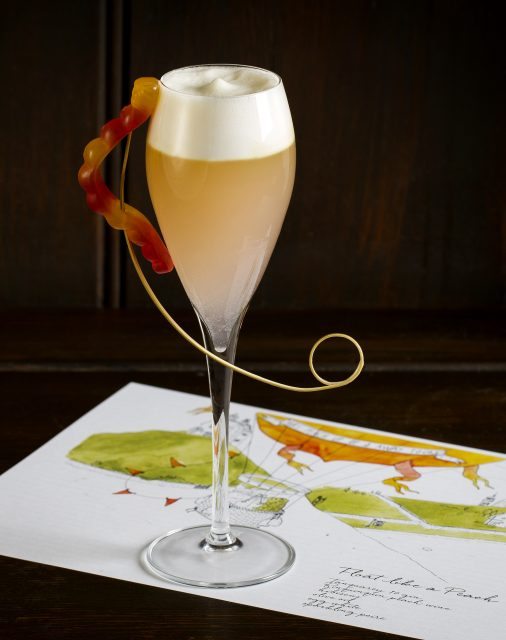 Based on the Roald Dahl classic, James and the Giant Peach, the Float like a Peach cocktail features Tanqueray Ten, Rinquinquin peach wine, hibiscus, olive oil and egg white topped with sparkling pear juice. Served in an elegant flute, it’s playfully garnished with a jelly worm. 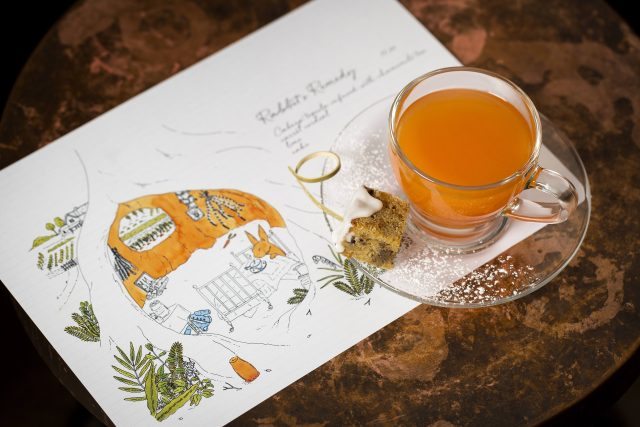 Taking its cues from Beatrix Potter’s top bunny, Peter Rabbit, the vibrant orange Rabbit’s Remedy is made with a lime juice and Tequila infused with chamomile tea and carrot cordial in a nod to Peter’s favourite snack. It comes in a tea cup with a square of iced cake on the side. 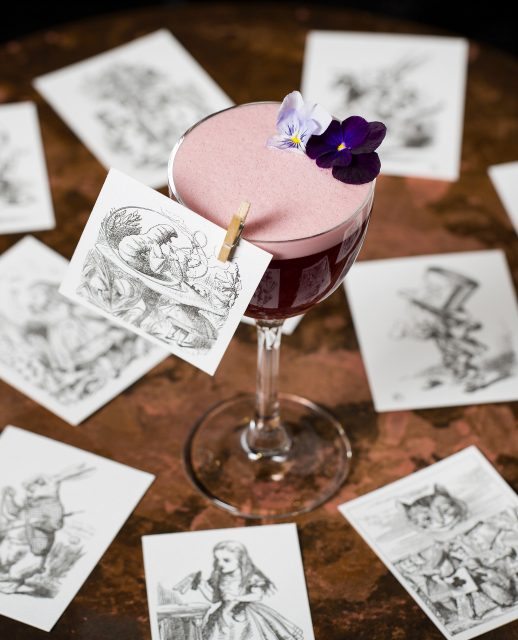 No children’s classics round-up would be complete without a hat tip to Lewis Carroll’s Alice in Wonderland, from which the Languid Caterpillar takes its inspiration. The pretty purple drink marries Bulleit Bourbon, Cynar artichoke liqueur, banana, lemon, spicy beetroot syrup and egg white.

Half a Pint o’ Buttah

Inspired by Harry Potter, the Half a Pint o’ Buttah is based on the tipple served at the Three Broomsticks Inn in J.K Rowling’s books. Theatrically poured on tap at the bar, the drink blends Monkey Shoulder Scotch, Kamm & Sons, thyme, butterscotch, citrus, bitters and beer. 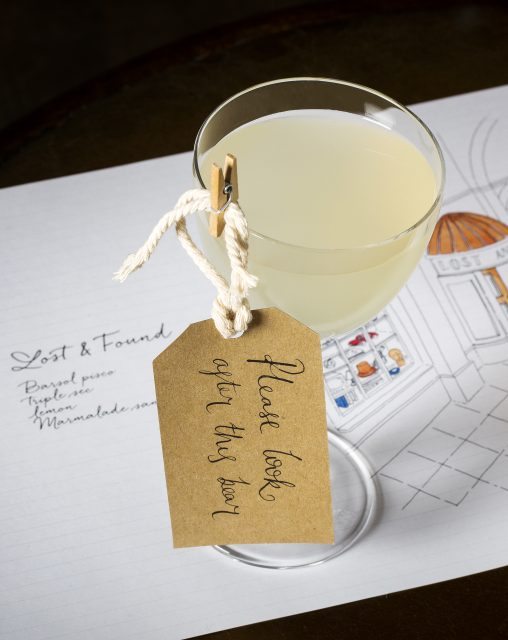 Based on the tales of Paddington Bear, the marmalade-loving Peruvian, the Lost and Found is a mixture of Pisco, Triple Sec orange liqueur (in a hat tip to Paddington’s love of sweet citrus), lemon and marmalade sandwich syrup. It comes with a label asking you to look after the lost bear. 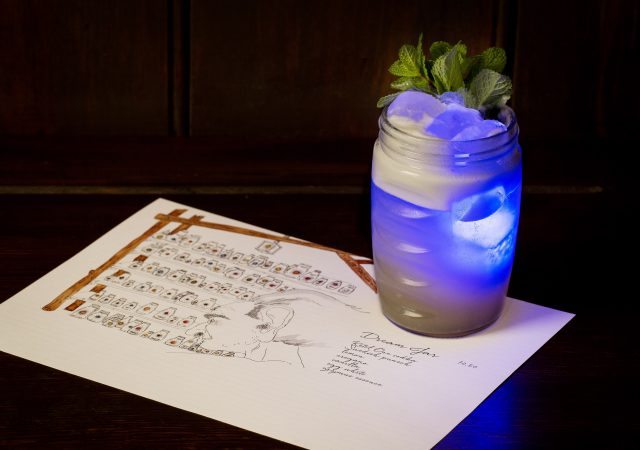 Inspired by The BFG, which was recently released as an animation film with Mark Rylance in the staring role, the Dream Far muddles Ketel One, Swedish punch, apricot, lemon, vanilla and orange syrup, egg white and soda. It arrives topped with lime and glowing in a giant jar. 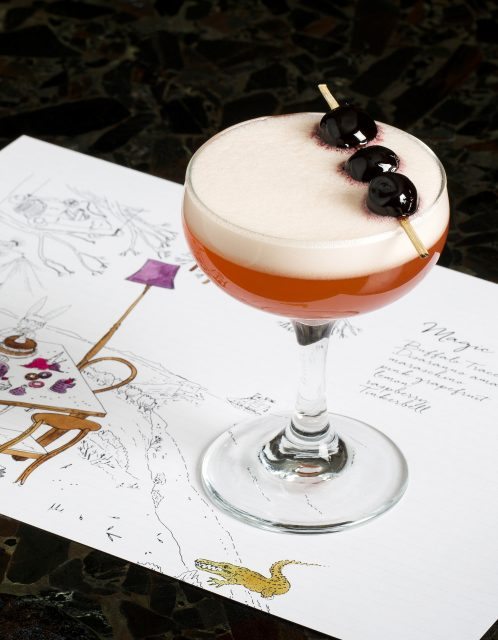 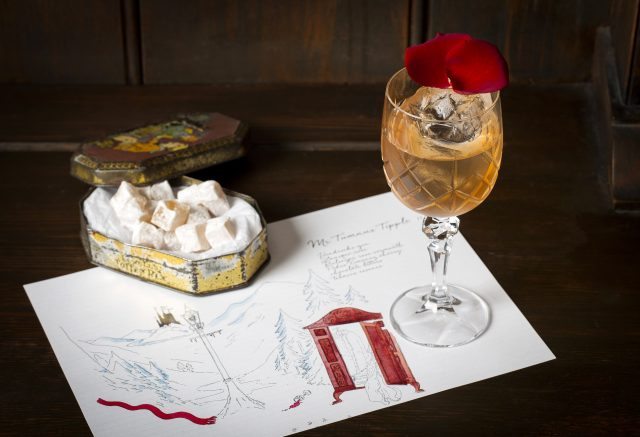 Riffing on The Lion, the Witch and the Wardrobe and the character of cheeky faun Mr Tumnus, this tasty tipple blends Hendrick’s gin with rosé, Cocchi rosa, Pedro Ximénez Sherry, chocolate bitters and tobacco essence, which would certainly keen Mr Tumnus warm in Narnia’s chilly climes. 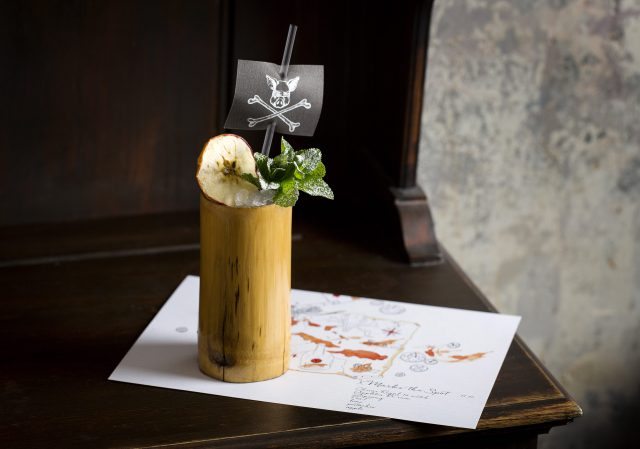