Smallest pub in the UK opens

The tiniest pub in Britain will open its doors in the London borough of Greenwich tomorrow that’s smaller than the perimeter of a snooker table. 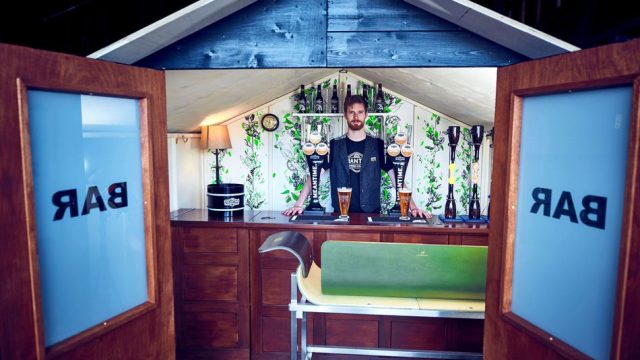 The brainchild of craft brewer Meantime, which is based in Greenwich, the Make Time For It pub was launched to encourage “in real life” interactions. The bar was built by six craftsmen from six cities around the world.

Keen for Londoners to wean themselves off their mobile phones, the 6ft by 8ft space will offer the chance for friends to catch up in the traditional way over a pint.

When you enter the pub in Peninsula Square, you’ll be asked to hand over your mobile to the landlord, who will look after it during your drinking session. Among the craft brews on offer will be London Lager, London Pale Ale and six limited edition ‘Make Time For It’ craft beers.

“The ‘Make Time For It’ campaign was designed to highlight the importance of time – the fifth ingredient in our beers — as well as celebrate the best of British craft from across the country,” said marketing director of Meantime Rich Myers.

“The bar was designed to help create the perfect drinking environment – a space to appreciate craft in a variety of forms and the perfect spot to spend time catching up with a mate over a beer,” he added.

Open from midday till 9pm until 30 October, entry to the pub is free and time slots can be booked on the Meantime website.

Click here for our round up of the top 10 tiny drinking dens in the capital.