Something fishy is going on in the environs of Old Street – but in a very good way. db paid a visit to wood-fired restaurant Sardine for red mullet and beakers-full of the warm south. 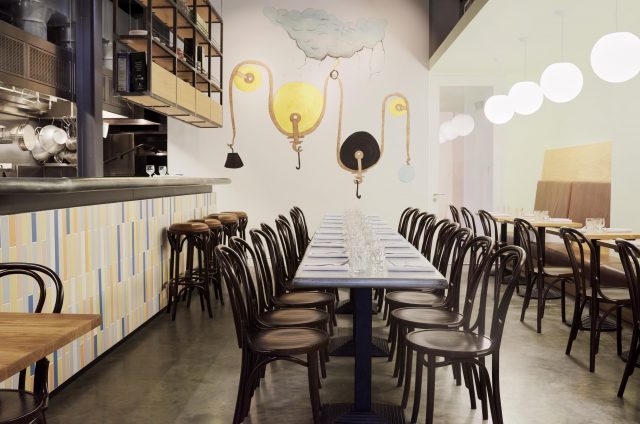 The concept: The warm south – Languedoc-Roussillon, Corsica, Sardinia, Sicily and the Amalfi coast, with a soupçon of north Africa. Think black figs, muscat grapes, big juicy olives, fresh Mediterranean-dwelling fish, aïoli and, of course, sardines, cooked over, or in very close proximity to, a wood fire, above which you will see gigots of lamb dangling on a string – or à la ficelle – and where the hum of the gargantuan air duct which snakes across the ceiling melds with the sound of bonhomous chatter and delta blues. Or at least such was the case when db ate there.

The décor: First of all, this isn’t the most conspicuous of eating places. If you can see the golden arches of a certain ‘fast food’ Goliath on the City Road, you’re close. Sardine is on the corner of Micawber street in one of those ubiquitous multi-purpose modern building units that could be flats (or ‘apartments’, as some fantasists insist on calling them), could be offices, could be portals to a kinder, more loving world, who knows?

In this particular corner, it houses a charming little restaurant named after a tasty fish. Inside it’s somewhere between refurbished warehouse and prettified Guardian canteen: small bar, seating for about 35 people, most of it on a long sharing bench or a row of tiny tables for two (which moved AA Gill to comment on the appropriateness of the name ‘Sardine’; it’s certainly true that big-bummed diners may struggle to park in these areas); there’s an odd, cartoonish mural on one wall, some pretty pastel tiles here and there, otherwise it’s while walls and functionality.

The food: It’s good to focus on what we love, and I love radishes, fried cheese sandwiches, I love pissalidière and sweetbreads – all of which grace the snack (average price £4) and starter (average price £7.50) menus. Sardines come with harissa, there’s a generous wedge of buffalo mozzarella with little jewelly black figs, handmade trofie (like spätzle), Genoese style, with pesto and green beans…

For the mains, conjuring images of the sunburnt fishermen of Marseille with rollies dangling from their lips, swearing enthusiastically at each other in the harbour, red mullet is one of the tempting fish options, coming with chard, peas and olive sauce. It’s uncomplicated but satisfying cooking, and the fish, crucially is fresh and flavoursome. When db visited, grouse season had just started and chef Alex was serving the savoury-scented whole birds on toast with a little bunch of muscat grapes. A well cooked autumnal treat.

Where’s the ratatouille, you ask? It comes as a side, along with some moreish ‘domino’ potatoes. Desserts include creamy nougat ice cream with fennel biscuit and a throwback rum baba with mirabelles (more custard or less baba next time, please; I ended up having to douse mine in muscat wine, though that turned out to be an inspired addition).

The drinks: The wine list, compiled by former Lyle’s and River Café somm Courtney Stebbings, leans towards the organic and low-intervention. There’s a tidy selection of good gear to sample for such a small list. The list in fact featured on the new Wine List Confidential app recently, scoring a pretty strong 90.6/100. If you’re a fan of the wines from Isabelle Legeron’s Raw Artisan Wine Fair you’ll have fun here.

The sole sweet wine, 1997 Ambré Rivesalte Muscat, is a lovely choice, while there are some appealing ‘Petit Aperitif Cocktails’ to loosen you up on arrival, such as the ‘Aix Dirty Martini with olive oil washed gin’. This is another restaurant that’s seen the sense of introducing OW Loeb’s wine on tap too – a Viognier, Nero D’Avola and Provence Rosé are available from £4 per glass.

Signature dish: Has to be the rustically delicious lamb à la ficelle – richly flavoured, pliant lamb leg which is slow cooked hanging from a string (la ficelle) over the fire; served with tender white beans and herb sauce in a clear broth.

Who to know: Head chef Alex Jackson (protégé of Steve Parle, formerly of Moro, River Café; owner of Rotorino, Dock Kitchen)  is a busy man in this buzzing new opening, which is attracting not just gastronautic locals but folk from across London and beyond. General manager Maggie is grace under pressure and will be able to tell you what things like ‘à la ficelle‘ mean should you require it.

Don’t leave without: Beyond the WCs at the end of the restaurant is the Parasol contemporary art centre. It’s open 10am-6pm Tue-Sat, and 12-5pm Sun, so if you’re dining during that time, you could drop in to see the exhibits.