With the only option to keep building ever upwards, Hong Kong has no shortage of vertigo-inducing bars and restaurants to keep city dwellers fed and watered this summer. 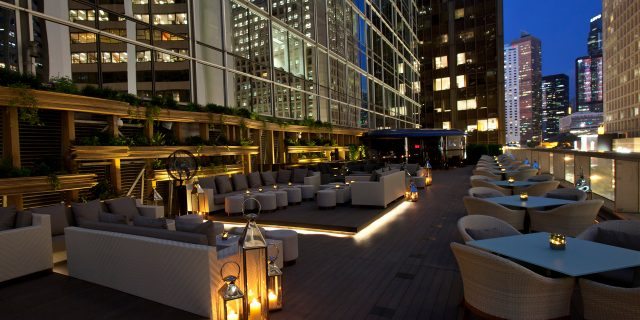 Best known for well-made cocktails, gin and tonics and an extensive cigar list, Armani/Prive’s rooftop bar claims to only be on the third floor, but feels much higher. 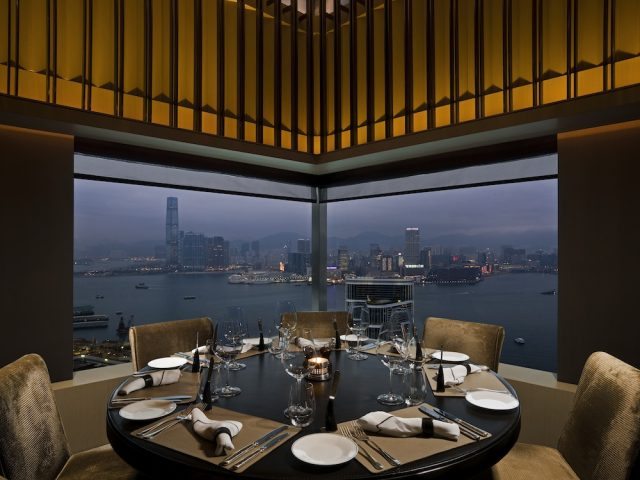 All shades of grey abound in the elegant Michelin starred Cafe Gray perched atop The Upper House Hotel in Admiralty’s swanky Pacific Place.

Headed up by chef, Gray Kunz and with acclaimed sommelier, Yvonne Cheung looking after the wine list, Cafe Gray offers a serene way to enjoy views of Victoria Harbour.

It is also the proud owner of one of Hong Kong’s largest stone bars of 14 metres, made for cocktail and people watching. 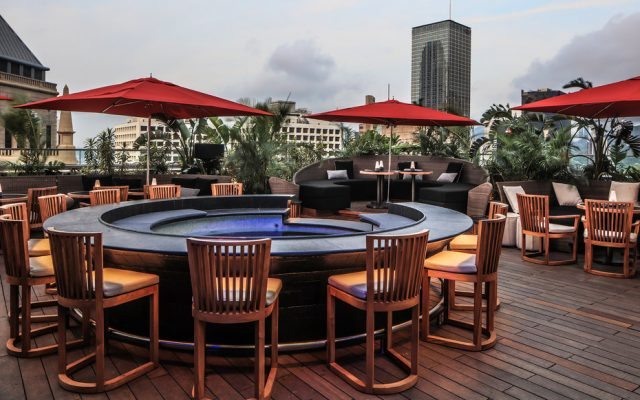 One of Hong Kong’s most talked about openings last year, Ce La Vi takes up the top three floors of Lan Kwai Fong’s California Tower and has a glass outdoor deck to peer nervously over the edge at the scurrying ant people below.

Known for extremely long and decadent Sunday brunches, Ce La Vie offers a multi-course free-flow Perrier Jouet ‘drunch’ for HK$488 plus HK$188 or half a dozen Irish rock oysters with a bottle of Louis Roederer Brut for HK$688. 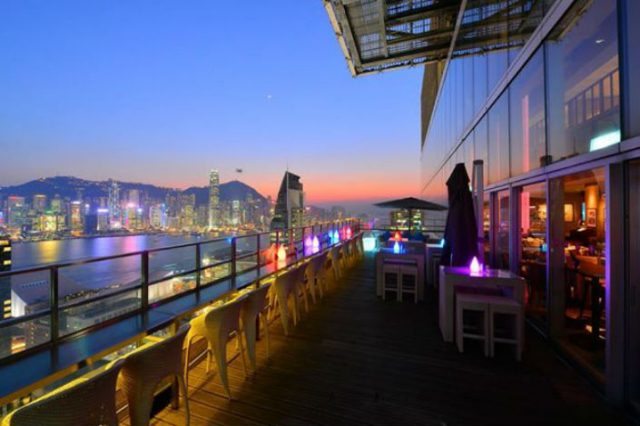 Offering unrivalled views from Tsim Sha Tsui’s 31-storey building, iSquare, the Eyebar is accompanied by Nanhai No.1 restaurant, named after the ship of a 15th century Chinese explorer.

Its floor to ceiling windows give the same view to those wanting to sit in the blissful conditioned interior and for fans of the classic Hong Kong film, The World of Suzie Wong, there is a cocktail named after the heroine. 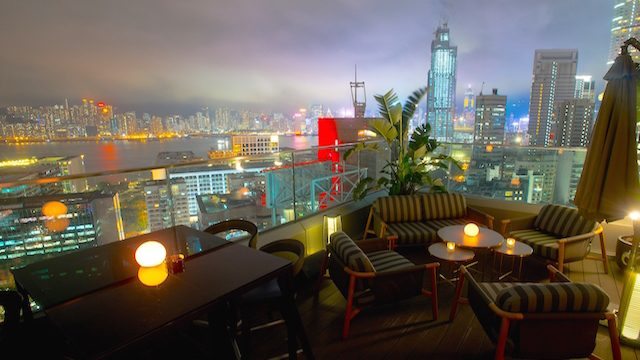 Salvatore Calabrese’s new bar at Maison Eight has kept his fans coming to the newish venue in the slightly obscure address of 8 Observatory Road in Tsim Sha Tsui.

With one of Hong Kong’s most extensive and lavish cocktail lists, Maison Eight has a large terrace which has been a big hit with Hong Kong’s F&B crowd. 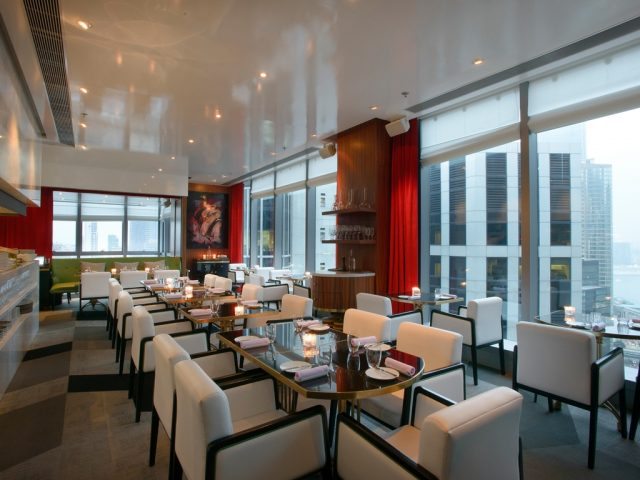 Philippe Orrico’s On Dining has floor to ceiling windows which can give melodramatic diners a feeling of existential fear as only a thin wall of glass separates them from toppling into the streets far below but the fantastic wine list and aromatic in-house cheese room is enough to hold anyone’s attention.

Famed for being the first place to serve 63 degree (onsen) egg in Hong Kong, On Dining also commands a heavyweight drinks team with Giancarlo Mancino masterminding the bar and Nicolas Deneux heading up the wine list with a very good Champagne by the glass selection. 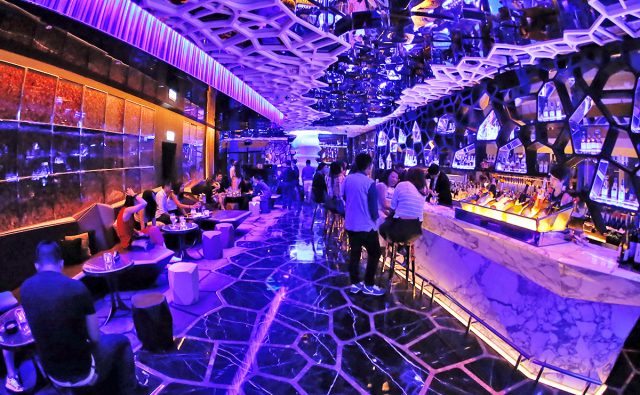 This would be no list if Ozone wasn’t on it. The Ritz Carlton’s Ozone really is the world’s highest bar (complete with terrace) on the dizzying 118th floor of the International Commerce Centre in Kowloon.

Japanese in style and with a Brazilian chef at the helm, Ozone is currently serving up unlimited Maki rolls every Wednesday for HK$480 with an extra $290 for a glass of Veuve Clicquot rosé and a cocktail. 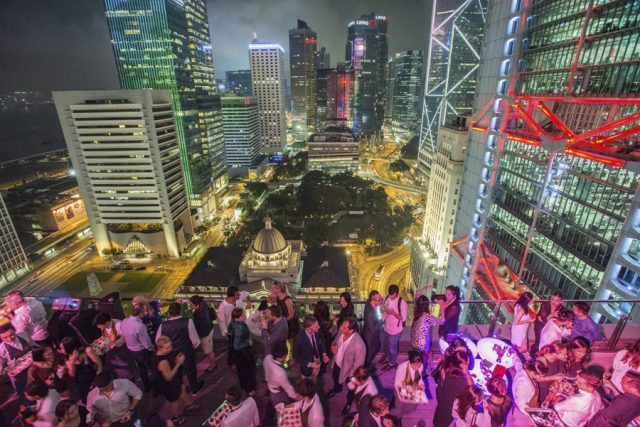 Appearing in countless expat and travel guides and being the posterchild of rooftop bars, Hong Kong’s Sevva does indeed command an awe-inspiring view of Central and Hong Kong’s historic Supreme Court, which was built in 1844.

A favourite of bankers, lawyers and the be-suited brigade (which makes up most of the male expat population), Sevva is currently offering an elegant afternoon tea with Belvedere Spritz cocktails for HK$240 for two Belvedere Spritz(es) and hearty helpings of savoury and sweet dishes. 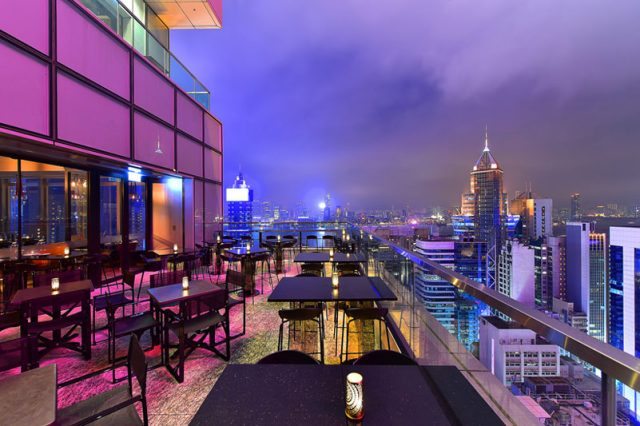 Always more fun to say after a few glasses of wine, Woolomooloo is one of Hong Kong’s best known steakhouses and also offers a slightly scary high terrace on the 27th and 28th floors of Soundwill Plaza in Causeway Bay. 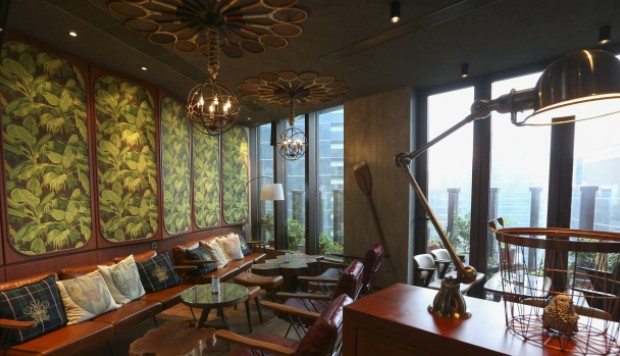 Perched on the top of the Wellington in Central, VEA is the joint project of Antonio Lai and chef, Vicky Cheng and is now one of the best places in Central to try some of Hong Kong’s most Instagrammable cocktails, mixed by chief bartender, Leszek Stachura.

Taking his cue from Chinese traditions, Stachura has created the Cleopatra Formosa, a combination of Absolut Elyx vodka, clarified pineapple and star anise syrup, fresh lime, and smoky mezcal in a golden pineapple and the dramatic sounding (and somewhat less traditional) Blood Wedding, with Absolut vodka and Lapsang Souchong tea.