The origins of Champagne on the podium

This Saturday marks the first time a motor racing champ sprayed his fellow racers with Champagne – in 1967. 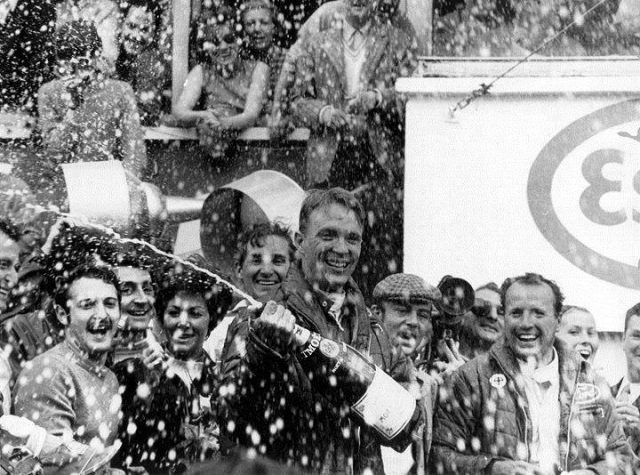 The image of Formula 1 podium finishers dousing each other in fizz is one of the most recognisable moments in all of sports; and one strangely suited for its daredevil, playboy and frighteningly expensive nature.

So used to the imagery have we become that perhaps we forget that the ‘tradition’ is really not so old at all. The man credited with inventing it is still alive today as it happens.

Far from the ritual originating in the early days of motor racing, it was actually begun by New York-born, Dan Gurney after he won the 24 Hours of Le Man in 1967 (pictured). The year before, the race winner, Jo Siffert, had inadvertently sprayed some of the crowd when he opened his bottle of Champagne that had been left out in the sun too long thereby causing the pressure to build up. It was not until the following year that the practice would be turned into the iconic photo-op it now is.

Having zoomed around the track in his Ford GT40 Mark IV (which is, by the way, an extremely gorgeous car), while standing on the podium Gurney deliberately shook up his Jeroboam of Moët & Chandon and drenched his co-driver, AJ Foyt, and everyone else in the immediate vicinity, including famous car designer, Carroll Shelby.

And so a tradition was born. Gurney went on to win the Belgian grand a week later in yet another fabulous motor racing icon – the Eagle-Weslake.

Life photographer Flip Schulke who took the image above kept the empty bottle and had Gurney sign it too. He held onto it for decades before giving it back to the driver who now keeps it next to a copy of the famous picture he has at home.

The official link between motor racing and Champagne itself is only a little older, having begun in 1950 after the French grand prix that year which was held at the Reims-Gueux circuit.