Speaking to dbHK before a Cantonese dinner pairing with a selection of his grand cru Champagnes, Varnier said proudly: “The subsoil of the Côte des Blancs is composed entirely of belemnite chalk with a depth of up to 10 metres on the hillsides.

“The five Grand Cru villages Chouilly, Cramant, Avize, Oger and Le Mesnil-sur-Oger only produce Chardonnay and the belemnite makes beautiful, finest expressions of blanc des blancs Champagne, full of minerality and acidity. It is the Rolls Royce of soil in Champagne. It only produces the best.”

The Varnier-Fannière vineyard in Avize was founded in 1860 by Varnier’s great-great grandfather who sold his grand cru grapes to the trading houses of Möet et Chandon, Pommery and Roederer.

It wasn’t until 1947 when Varnier’s grandfather, Jean made the first bottle in 1947 and by 1959 was selling 10,000 bottles a year. Now the Varnier-Fanniere range includes a Brut NV, Brut Zero NV, Cuvee Jean Fannière Origine, Cuvée St Denis, a NV rosé and a demi-sec. 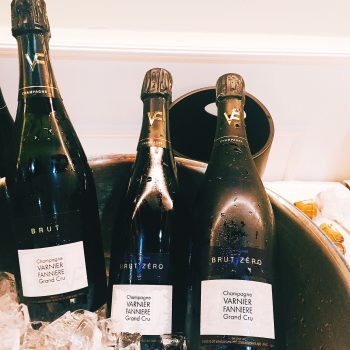 “My father extended our domain to include the grand cru terroirs of Cramant and Oger, two villages close to Avize and then when I took over in 1989 I’ve retained the same traditions such as the 1965 grape press – one of only five left in Champagne – and I riddle everything by hand. It is an honour for me to continue growing grapes in this terroir, after five generations.”

Varnier’s four hectare property produces 35,000 bottles, two-thirds of which is exported to 30 different countries with the US and Japan taking the lion’s share. Emboldened by the idea that his Champagne pairs so well with sushi in Japan, Varnier is keen to explore the potential of other Asia markets.

“I think Hong Kong could be the next Japan in terms of premium Champagne consumption. Champagne goes very nicely with Chinese cuisine, and the Brut Zero is perfect with seafood dishes. South Korea and Taiwan are also becoming more and more interested in the idea of grower Champagne houses. I think Asia will be a very exciting area for us to develop in.”