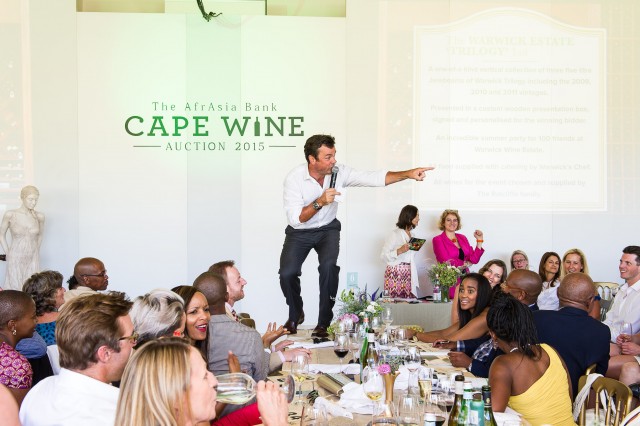 The inaugural auction last year raised just over ZAR7m for children’s charities, so in only its second year the event has seen a 50% increase in sales by value.

The two day event was held at two venues, first of all The Dylan Lewis Sculpture Garden in Stellenbosch for the barrel tasting and preview and then at the Boschendal Estate in Franschhoek for the auction itself on St Valentine’s day, Saturday 14 February.

Over 300 international wine lovers and philanthropists bid for 37 “once-in-a-lifetime” auction lots covering unique art pieces, dinners with world renowned chefs, exclusive parties and holidays and, of course, extremely rare wines from both South Africa and around the world.

The top lot of the day was the “Vrede en Lust Lot”; a holiday to the Seychelles for eight (flying business class), staying in a luxury villa on a private island before going on a three day cruise on a new Powercat catamaran and with 60 bottles of Vrede en Lust to enjoy – all for ZAR800,000.

Another bidder paid ZAR600,000 for a week-long stay for four at the Villa Aiola near Rome with a private tasting at Tenuta del Trinora; two magnums from the Tenuta and also Saxenburg; a ZAR10,000 voucher from fine wine merchant Port2Port and a private tour, tasting and lunch at Saxenburg.

Sixty bottles of Paul Cluver Pinot Noir and a week-long stay at a Loire château raised a further ZAR550,000.

Further wine lots from Klein Constantia, Glenelly, Villafonté, Warwick Estate and collections from the rising stars of Hemel-en-Aarde and Swartland often in collaboration with top hotels made ZAR300,000 – ZAR450,000 apiece.

Co-founder of the auction and owner of Warwick Estate, Mike Ratcliffe, said: “We are once again humbled and overwhelmed by the immense generosity shown at this event. Today we have witnessed another outstanding demonstration of the unity of the South African wine industry and the philanthropic capacity of humankind.”

James Benoit, CEO of sponsor AfrAsia Bank, continued: “We are incredibly proud to be partnered with the Cape Wine Auction team, who share our commitment to making a real difference in the lives of many South African children, by upholding Nelson Mandela’s belief that, ‘Education is the most powerful weapon which you can use to change the world’.”