Global wine production is showing signs of increasing homogeneity as international varieties expand their share of the world’s vineyards.

A study published in the latest issue of the Journal of Wine Economics reported that, despite “the competitive challenges for producers seeking to differentiate their product”, the 35 most widely planted grape varieties saw their share of the global vineyard area rise from 59% in 2000 to 66% by 2010.

In addition, 12 of the 44 countries featured in the study had more than one third of their total vineyard area planted with their respective most popular grape variety.

The study, titled Changing Varietal Distinctiveness of the World’s Wine Regions: Evidence from a New Global Database, drew on data from the decade up to 2010 from more than 600 wine regions in 44 countries and 1,300 individual grape varieties. In total, it claimed to cover “as much as 99% of global wine production”. 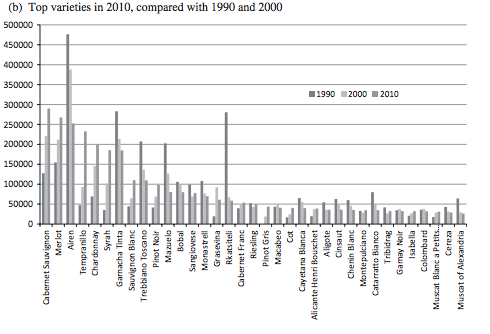 Echoing observations made by grape geneticist and Wine Grapes co-author José Vouillamoz, the report found that both Cabernet Sauvignon and Merlot more than doubled their share of plantings to head the league table, while Tempranillo and Chardonnay more than trebled their own proportion of vineyard area.

There was also a major leap in popularity for Syrah, which rose from 35th most widely planted variety into sixth place. Sauvignon Blanc and Pinot Noir both moved up to take their places in the top 10.

By contrast, there were declines from Airén, which slipped from first place to third, while Grenache fell from second into seventh and Sultaniye – also known as Thompson seedless – plummeted from third to 35th place. 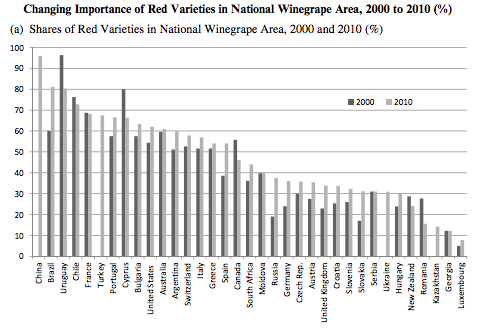 Overall red grape varieties increased their prominence, with representation growing from 49% to 56% over the course of the decade. Nevertheless, there remained significant variation in red grapes’ popularity from country to country, with China showing a 96% weighting in favour compared to just 8% of coverage in Luxembourg.

The research highlighted a particular rise in the weighting of “French” grape varieties, whose global vineyard coverage rose from 26% to 36%. This was particularly evident in the New World, where this proportion increased from 53% to 67% during the 10-year time frame.

Overall, the report found that the global area dedicated to wine grape production fell by nearly 6% during the first decade of the 21st century, compounding an 8% slide in the 1990s.

This was led by major decreases in Spain and Portugal, where vineyard area declined by 13% and 20% respectively, as well as several countries in south-east Europe. Such shrinkage more than outweighed significant vineyard expansion of 30% in both the US and Georgia, 40% in the Czech Republic and 220% in New Zealand.

Analysing these findings, the report cast doubts on the growing popularity of international varieties, especially French ones, being entirely attributable to the quality of their performance.

Instead, it queried: “Is the increasing concentration on major French varieties because non-French producers – particularly in newly expanding wine producing countries – find it easier to market them because of France’s strong reputation in those varieties?”

Looking ahead to the future shape of the world’s vineyards, the study indicated that the trend towards homogeneity looked set to continue, highlighting the region that is currently seeing the most rapid increase in vineyard plantings – China.

“If China is the country with the greatest expansion of wine grape area in the next few years, and if its new plantings remain focused on key French red varieties, the concentration of the world’s varietal mix may continue to increase for some time yet,” concluded the report.