Forget Bordeaux, Italy or the Rhône, the wines to have bet on in recent years are part of an obscure Liv-ex index – ‘The Rest of the World 50’ 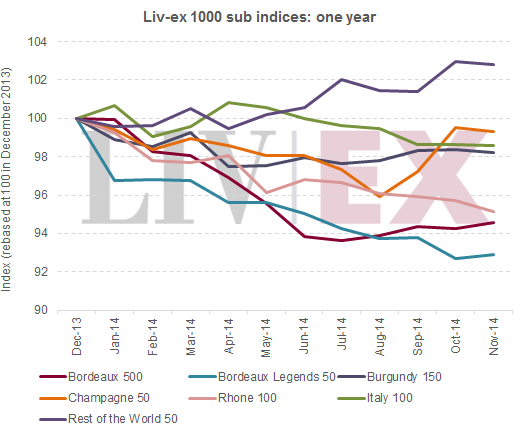 “Since the market peaked [May 2011] it has been the best-performing sub-index of the Liv-ex 1000,” said director Justin Gibbs. This lesser-known index covers the last ten vintages of just five wines – Napa valley’s Dominus and Opus One, as well as Penfold’s Grange, Taylor’s Port and Vega Sicilia.

For Gibbs: “It’s part of the rotation of money out of Bordeaux,” and reflects some very high scores particularly by the Californians. “With Opus One and Dominus, these are some of the best wines they’ve ever produced.” While other sub-indices have dipped in the year to date, Gibbs mentioned Champagne as being an “extremely steady market over the long-term.” Vintages are released when ready to drink and corks are popped far more often than rarefied Burgundies like DRC.

Of course nothing rivals the sheer scale of Bordeaux which accounted for 80% of Liv-ex trade by value last month. Referring to two of the main Bordeaux indices, Gibbs said: “Both the Liv-ex 50 and 100 have held steady for six months, after 18 months of relentless decline.” Yet he conceded: “people will remain nervous” until the 2014 prices are released. “Given how little business was done in the campaigns of 2013, ’12 and ’11,” he added, “traditional collectors must be getting a bit light on Bordeaux.” This suggests some possible pent-up demand for the Château-owners to tap next Spring. Then again, collectors may have been seduced by the rest of the world.