Heineken has tapped into the design flair of Apple’s Marc Newson to create a “revolutionary” draught beer dispenser for use at home. 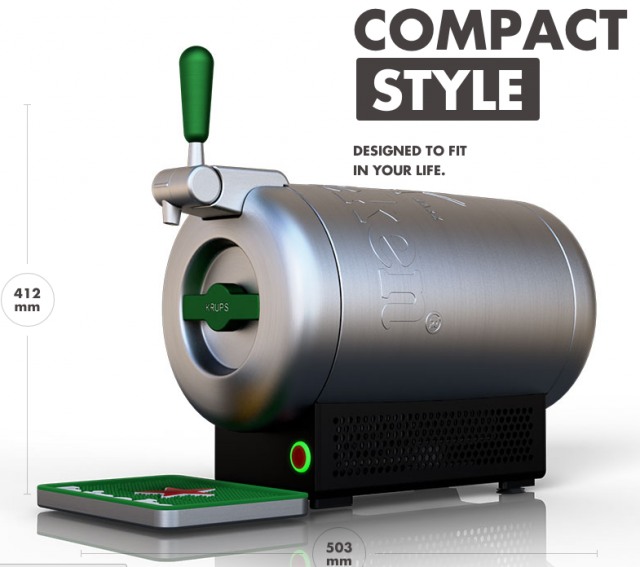 Introducing this new gadget called “The Sub”, which represents a collaboration between himself, Heineken and technology firm Krups, Newson drew a comparison with the Nespresso machines that helped people to make their own high quality coffee at the touch of a button.

In an interview with design magazine Dezeen, Newson, who described himself as “a consistent beer drinker”, explained the implication of The Sub for the brewing sector.

“This will make available all different types of brands of beer around the world to people who would otherwise never be able to experience them,” he claimed.

“And if they could experience them they would be in a bottle or can, certainly not in a draft format. It’s really a kind of revolutionary shift in terms of this particular product.”

Although Heineken launched a similar product designed for the domestic sphere a decade ago, Newson argued that no other machine on the market offers the “same functionality and the same flexibility”.

Currently priced at €249 (£195), The Sub is already available in Europe in black or silver and stands 41cm high in the shape of a small beer cask. The user inserts a two-litre pressurised “Torp”, which comes in a range of Heineken brands, and then pulls their own pint.

Mark van Iterson, Heineken’s global head of design, confirmed that the device would launch in the UK next year, bringing with it a much broader range of draught beers than the company is currently able to offer this market.

“You will be able to order a Dutch Weissen beer which you could usually never buy in London,” he commented, describing “a whole ecosystem” surrounding the product which, he promised, “will enhance the home beer experience.”