Wine signed by first man in space for sale

An empty bottle of wine signed by the first man in space, Yuri Gagarin, and used to toast a doomed mission is expected to fetch up to £2,000 at auction. 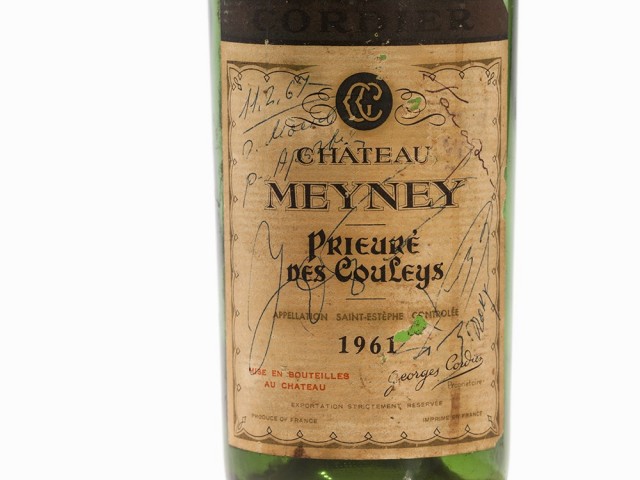 The bottle of Château Meyney, Prieuré des Couleys 1961 was drunk by Yuri Gagarin, the world’s first man in space, and Vladimir Komarov to celebrate their selection for the Russian Soyuz programme in the 1960s.

Komorov was launched in the Soyuz 1 rocket, which had been plagued by technical problems, in 1967 as part of the race to reach the moon.

He was killed when the rocket crashed on re-entry – the first in-flight fatality in the history of spaceflight.

Gagarin had been the back up pilot for the mission as bosses had been unwilling to risk the life of a national treasure for the first launch of the programme.

The cosmonaut was the first human to journey into outer space when his Vostokspacecraft completed an orbit of the earth on 12 April 1961.

Gagarin later signed the bottle, along with several other cosmonauts, shortly before his death in 1968 when a training jet he was piloting crashed.

Speaking to the Metro, Viktoria Kissleva, of German auction house Auctionata, said: “Despite the Cold War, the Soviet elite were never shut off completely from Western products and Gagarin managed to get hold of a bottle of fine French [wine]. He drank it the day he was named in the back-up crew – probably with Komarov and the other cosmonauts chosen for the mission.”

Komarov was posthumously awarded a second Gold Star and was given a state funeral with his ashes interred in the Kremlin Wall Necropolis at Red Square, Moscow.