One job in beer supports 45 in other industries

A recent study by the Beer Institute has found that one job in a US brewery supports a further 45 jobs in other industries. 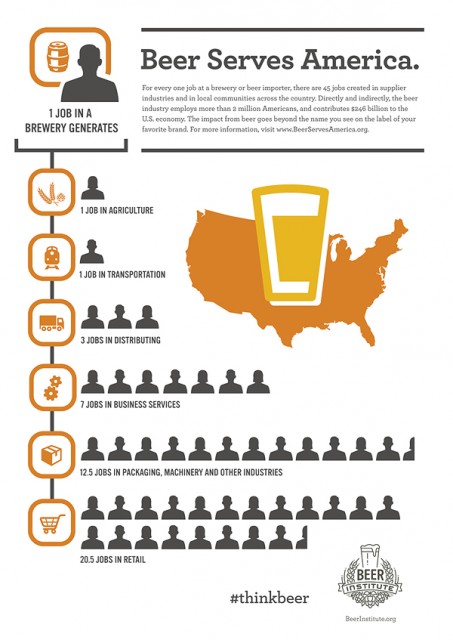 The study, jointly commissioned by the institute and National Beer Wholesalers Association, found that a brewery job helps support others in the agriculture, business, construction, finance insurance and real estate, manufacturing, retail, transportation and communication, travel and entertainment and wholesale sectors.

Broken down, a job in a brewery supports an additional job in agriculture, one more in transportation, then three in distributing, seven in business services, 12.5 in packaging and just over 20 in retail.

Unsurprisingly, California ranks highest in terms of jobs supported, with 241,640 jobs supported by the state’s brewing industry with a total economic contribution of over US$34 billion.

The brewing industry now employs more than 2 million people in the US, contributes $246.6bn to the economy and generates $49bn in state and federal taxes.

The Detroit News recently reported that the craft beer boom in Michigan has led to the planting of over 400 acres of hops since 2007 – there were none before.