Catching drink drivers could soon be as simple as pointing a laser, thanks to the development of a device that can detect the presence of alcohol inside a moving car.

Research published by Polish scientists Jarosław Młyńczak, Jan Kubicki, and Krzysztof Kopczyński, of the Military University of Technology in Warsaw in the Journal of Applied Remote Sensing, announced details of a laser system which can be used to detect alcohol vapour in moving vehicles, as reported by ibtimes.co.uk.

The device, made at the university’s Institute of Optoelectronics, uses “stand-off”detection – a method of detecting chemical and biological compounds using a laser from a distance that is safe to those in the car. 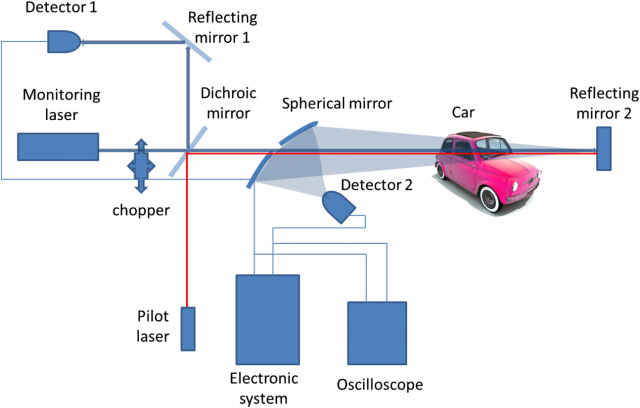 Tests showed alcohol vapor could be detected on the breath of a driver as low as 0.1%, and from any of the car’s passengers.

The system can be set up on the side of a road to monitor each passing car with a photo of its number plate sent directly to the police if alcohol is detected.

Marco Gianinetto of the Politecnico di Milano, an associate editor with the journal, “We are already familiar with laser instruments used by the police for speed-limit enforcement. Now these researchers have demonstrated how a laser device could be effectively used for detecting drunken drivers and thereby helping to reduce the number of accidents caused by drivers under the influence of alcohol.

“In the future, a similar technology may be developed to detect different chemical compounds, enabling the detection of drivers under the influence of other intoxicants.”

However the author’s did point out the potential for the system to be fooled.

Summarising their research the authors said:  “From the practical point of view, there seem to be some countermeasures, such as driving with windows open, solar screens on the side windows, etc., that can be applied by drivers to deceive the system. However, such situations are very easily detected by the system, which sends this information to the policeman indicating that the car should be checked.

“In case of driving with air-conditioning or fans on, the results of measurements will surely be distorted, but it depends on the speed of moving air, which usually is very low and, thus, its impact on the measurements is slight. All the possible countermeasures are very important and have to be investigated, which will be done during the next stages of the ongoing project.”