Young Master is a new craft brewery in Hong Kong, located in the Ap Lei Chau district. Set up and run by Rohit Dugar it is an exciting addition to a quietly growing craft brewing scene in Hong Kong. 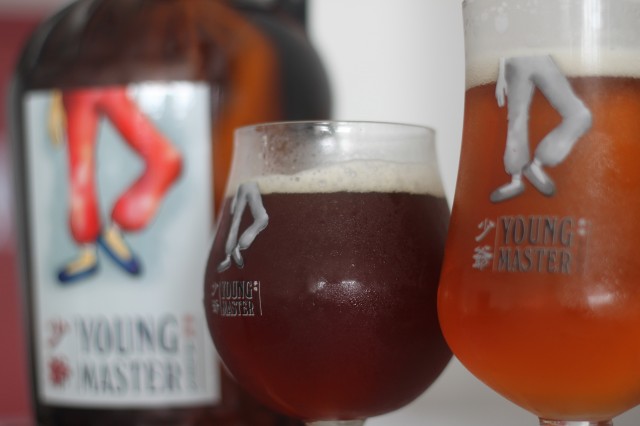 Currently the Young Master range spans three series; the “Session” series with an IPA, witbier and a lightly spiced ale, there’s the “Robust” series with a toasted rye beer and a black beer and finally the “Imperial” series which has a highly hopped IPA and another rye beer aged in old rye whiskey barrels.

How widespread is the microbrewing industry here in HK? Are there many, is it growing in popularity?
Local microbrewing is nascent in HK but is growing rapidly. When we started brewing in November of last year, we were the only ones actively doing it in HK at the time and now there are several. We have been making more and more beer every passing month since we started and the demand for our beer far exceeds current capacity.

When did the trend begin and has it been reinforced by the opening of craft brew pubs in recent years?
When I first moved to HK three years ago, there was practically nothing by way of good beer in HK. In fact if you wanted to drink good beer back then, you pretty much had to make it yourself.

A lot has changed in this time – we now have local breweries making world-class beer, homebrewing has taken hold as a hobby at the grassroots level, we have a great craft beer festival in Beertopia, better quality imports have started to come in and last but not the least, the “gatekeepers” – bars and restaurants have finally started to understand what craft beer is and that they need to pay just as much attention to their beer lists as they do to their wine, spirits and cocktail lists. Specialist craft brew pubs like The Globe or Roundhouse have definitely helped the movement greatly by helping open people’s minds about the diversity in beer.

What beer styles tend to be the most popular among drinkers?
We have not seen evidence of a single style being dominant. One of the more interesting aspects about craft beer is the diversity of styles that new adopters like to discover and enjoy. In our portfolio we always have a lot of variety precisely for that reason.

Our rich and complex 8% Imperial IPA is just as popular as our light and refreshing summer wheat beer scented with Chinese herbs. We are not a brewery that believes in focus groups or historical information about what styles of beers have been popular. Our mindset, like much of the craft beer world, is not about finding one or two killer styles, but to always offer a variety.

Do brewers look to the UK or US for inspiration or is there a style emerging here that’s all its own?
The goal of craft brewers like us is to be distinctive and develop our own individual personality. There is always inspiration to be drawn from traditional styles coming from UK, Belgium, Germany etc. or contemporary styles from US, Japan and Australia, but brewing much like cooking offers a lot of room for individual breweries to do their own thing.

As for Hong Kong, our long term vision is to indeed foster the development of a local brewing culture, which would include local brewing styles. We can’t say today what that would look like. It will be an evolution and the only way we will get to that point is by experimenting and trying new styles in a measured way. To that end, in our portfolio we always try to keep two to three beers that are closer to a traditional style and two to three that are more innovative.

Is it driven by the expat community or Hong Kongers as well?
Interest among Hong Kongers, especially the younger generation is very strong. The majority of bars that carry our beers currently, however, do attract a greater proportion of expats, so consumption currently is driven more by them.

We do open house tours at our brewery and find that we get as many Hong Kongers as expats, so the interest is definitely there. As more bars and restaurants that attract a more local crowd also understand that there is demand, we will see actual consumption being less skewed towards expats.