While whisky is commonly aged in wood from the wine industry, Jacob’s Creek has launched the opposite: a range of red wines aged in whisk(e)y barrels.

Called Double Barrel, the launch follows two years of trials which revealed that Shiraz from the Barossa complemented barrels formerly used to aged Scotch, while Cabernet Sauvignon from Coonawarra was best suited to casks from the Irish whisky industry.

Jacob’s Creek brand owner Pernod Ricard has an extensive supply of both sources of barrels due to its spirits business, which comprises Chivas Regal Scotch and Jameson’s Irish whiskey, among other whisk(e)y labels.

According to chief winemaker Bernard Hickin, experiments with whisk(e)y barrels showed that they brought added flavours to the wines, but different cask sources were necessary for the two red grapes from different regions

“Each barrel performs differently, so it took time to understand the true effect on the wines, and achieve a result that was perfectly balanced,” he said.

“We started with high quality fruit from selected Barossa and Coonawarra vineyards, from which we crafted premium red wine. We then matured the parcels traditionally in French and American oak barrels, before finishing 100% of the matured wine in old whisk(e)y barrels,” he recorded.

Continuing, he said, “We discovered that finishing the wines in aged whisk(e)y barrels introduced additional intricacy and a smoother texture, due to the fundamental differences between barrels made for ageing whisk(e)y, and those crafted to age wine.”

Nevertheless, Hicken discovered that “the rich intensity of Shiraz was considered better suited to the more assertive style of Scotch whisky, while the elegance of Cabernet Sauvignon was well suited to the smooth style of Irish whiskey”.

Whisk(e)y barrels are scorched at a high heat, which releases their natural wood sugars, while their narrower staves allow for greater oxygen exchange.

However, Jacob’s Creek stressed that the whisk(e)y barrels are well aged and consequently “their influence is subtle – adding intriguing nuances without changing the essential character of the wine.”

The two new wines will be available in major retail outlets across Australia from 1 July with an RRP AU$24.99 (£13.80) 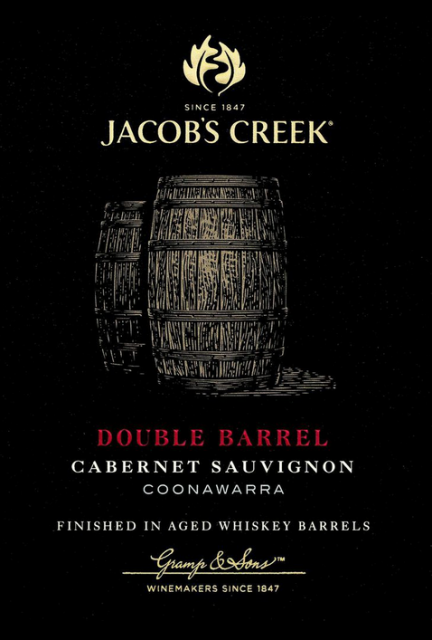 The tasting notes on the Double Barrel wines from Jacob’s Creek can be seen below:

Palate: “The complex palate reveals itself with style. Traditionally assertive Coonawarra tannins are evident at first, before giving way to a mid palate filled with ripe cassis, olive tapenade and complex briary hints. Fine, dusty tannins give excellent line and length, and are layered with sweet and toasty characters  reminiscent of crème brûlèe. Our unique Double Barrel technique of finishing in  aged Irish whiskey barrels has integrated the myriad of flavours and brought extra richness to the palate.”

Palate: “Double Barrel Shiraz has a full and generous palate with a beguiling mix of sweet red fruits and dark chocolate indicative of its origins as Barossa Shiraz. Subtle toasty vanillin derives from aging in traditional French and American oak wine barrels. The careful use of aged Scotch whisky barrels for finishing has added complex nuances of almond-husks and also softened the dense tannins to yield an incredible smoothness.”

Hicken commented: “The use of Scotch whisky barrels to finish our Double Barrel Shiraz has imparted additional layers of complexity and smoothness, which combine beautifully with the rich varietal plum, fruit cake and chocolate notes of Barossa Shiraz.”