Mintel’s Jonny Forsyth investigates the astonishing rise of ultra-premium Tequila in the US, and how P. Diddy threatens to turn it into the new Scotch

UNLIKE IN the UK, Tequila is big business in the US. The category sells just over 13 million 9-litre cases there, which gives it a 6.5% volume share of the US spirits market and puts it above gin, Scotch whisky and Cognac/brandy. It has also grown its retail bottle sales by more than a fifth (21%) since 2009. However, its volume growth is only a small part of the story. A market that in the 1980s and early 1990s was considered “cheap and cheerful”, and more associated with Mexican-themed restaurants than trendy bars, has embraced ultra-premiumisation.

This process has also begun in the UK, but is at a much earlier stage of development, aided by the introduction of brands such as Patrón in some of Britain’s trendier metropolitan bars. For discerning Americans, however, Tequila is becoming the “go to” drink. In fact, Mintel data shows that Tequila attracts wealthier Americans more efficiently than any other spirit type – 43% of US households with an annual income of $100,000-plus drink it, compared with 36% of the total drinking population.

In America, Tequila has always been popular among young adults for its association with partying. This, and the country’s proximity to Mexico, means that four in five bottles of exported Tequila end up here. Whereas Tequila was once a generic export, Mexican producers are now showcasing the variety, craft and quality that go into making the finest examples of the spirit. This type of nuanced approach has also worked well for whiskey and Bourbon, allowing them to differentiate their products from the hugely popular vodka segment.

Instead of just asking for a Tequila at the bar, many Americans now choose from the likes of añejo (oak-barrel-aged), blanco (white), plato (silver) and 100% agave. Or they simply opt for one of the increasing array of flavoured Tequilas. Many brands also have an interesting story to tell, involving small batch and traditional production techniques that lend the products an authentic charm.

For example, in some regions of Mexico, the agave is still harvested manually by jimadors with generations of knowledge about the plants. Some Tequila also still gets made using the traditional artisanal method of crushing the cooked agave on a large stone wheel pulled by a mule or ox and then placing it in stone-lined cooking ovens.

In other words, Tequila touches on many of the quirky, authentic and traditional characteristics that are increasingly driving consumers – both American and British – towards craft spirits generally.

Diageo recently announced that it was joining forces once again with Sean “P. Diddy” Combs by acquiring ultra- premium Tequila brand DeLeón. Even by Tequila’s increasingly high standards, DeLeón plays at the top end, retailing at $120-$1,000 a bottle, and is popular in the Hollywood circles within which the rapper and entrepreneur mixes.

DeLeón sells just 10,000 cases annually, but that is only 40,000 fewer than Cîroc shifted after P. Diddy and Diageo announced their first joint venture in 2007. At last count, Cîroc had reached more than two million cases and Diageo would be overjoyed if DeLeón passed a similar milestone. This is especially so as the drinks group has now severed ties with the Beckmann family over the distribution of market leader José Cuervo. The mainstream-positioned José Cuervo dominates the US Tequila market with a 24.4% share of retail sales, well ahead of the second-placed Patrón. There were rumours that Diageo would acquire third- placed Sauza (13.9% market share) by bidding for Beam, until Suntory’s recent surprise intervention. 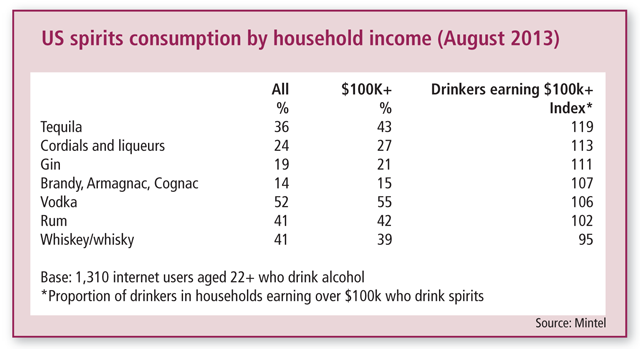 This has left Diageo with a dilemma as it has publicly admitted that US Tequila is a priority segment for the company and that it wishes to fill the giant-sized José Cuervo revenue hole. The sky-high price tag of Patrón makes it highly unlikely that Diageo would seek to acquire this premium trail-blazer, leaving the company with little option but to build from the ground up. Diageo is no doubt emboldened by the fact that this approach worked spectacularly with Cîroc in vodka.

Diageo now has three small brands within the US Tequila market. As well as DeLeón, it has recently purchased Peligroso and the fast-growing (but sub- 200k case) Don Julio. It is actually the smaller Tequila brands that are currently achieving the most spectacular rise in the US, with Brown-Forman’s El Jimador and Herradura, and Proximo’s Zarco and 1800, recently posting double-digit annual growth. In fact, the Beckmann family has been so impressed with Proximo’s sales generation that it has made the company the new distributor of José Cuervo.

P. Diddy has gone on record as saying he wants DeLeón to be “one of the first sipping Tequilas”. In other words, the brand will follow a different path from Cîroc which, while an ultra-premium brand for vodka, retails at a much more affordable $29.99.

Sipping spirits is anathema to most younger American drinkers, who tend to strongly prefer a mixer. It is also not the first time a Tequila brand has tried to market itself as “sippable”. However, Mintel data shows that black Americans are significantly more likely to drink spirits either neat or ‘on ice’ when compared with other ethnic groups. P. Diddy has a particularly strong cultural influence over this group: Cîroc is consumed by 38% of black Americans, compared with just 10% of overall vodka drinkers.

Black Americans are currently under-represented in the Tequila market, with the product playing particularly well among the country’s large Hispanic population, as well as white Americans. However, there lies the growth opportunity. According to the latest US Census data, one in ten black households has an income above $100,000, which equates to 1.4 million households. Not a big primary target, but big enough when you are charging $120-$1,000 a bottle. This is especially so as those black Americans who do currently drink Tequila show far greater loyalty to the category than do other ethnic groups, being more than twice as likely as whites, Hispanics or Asians to vote Tequila as their favourite spirit.