Ten years ago this week, the Oak Knoll District of Napa Valley received its official recognition as an American Viticultural Area (AVA) from the US Department of Treasury’s then-named Bureau of Alcohol, Tobacco and Firearms. 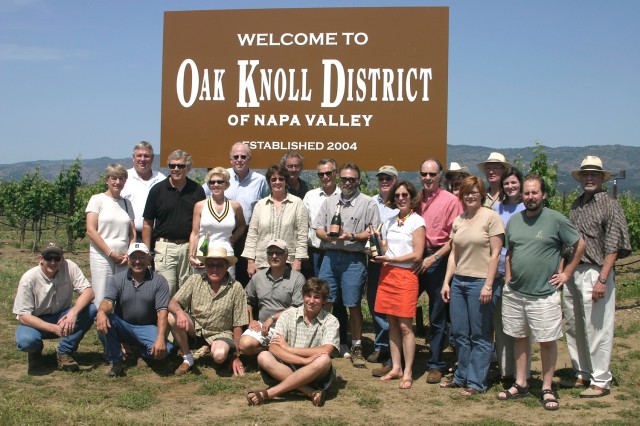 It is one of sixteen sub-appellations of the Napa Valley. While it didn’t become official until April 26th, 2004, the region has a long history in Napa Valley. Oak Knoll’s wine story began in 1850 with Captain J.W. Osborne’s purchase of land three miles south of Yountville. Naming the area Oak Knoll, his 1,600 acre farm was the first in the region to be planted with premium vinifera varieties rather than the more common Mission grape. The farm was ranked Best in California by the State Horticultural Society, and his fifty acre vineyard was the largest and arguably most prestigious in Napa Valley. Tragically, Osborne was shot to death by a disgruntled former employee in 1863. If he had lived, historian Charles Sullivan believes Osborne might well have been known as the father of the Napa Valley fine wine industry.

“Traditionally ten years is celebrated with gifts of tin or aluminum…we’re thinking wine. It’s time to pull some corks and raise a toast—and our growers and vintners will be doing just that throughout the remainder of the year,” said Oak Knoll District Association board president John Wilkinson, of Wilkinson Family Vineyards. “This past decade has really brought the esteem of Oak Knoll District’s vineyards and wine front and center.”

The climate is cooler than the upper valley, yet warmer than windswept Carneros to the south. The area is considered a sweet spot for both Bordeaux varieties like Cabernet and cooler climate grapes like Pinot Noir and Chardonnay. Warmer, drier winters and cooler growing seasons with more morning and evening fog provide for a long growing season. Winemakers prize this winning combination as it allows for bright fruit flavors with excellent, balanced acidity and structure. The winning Chardonnays from the Judgment of Paris and the Gault Millau World Wine Olympics were sourced from the Oak Knoll District and these grapes have a long reputation for their elegant style. 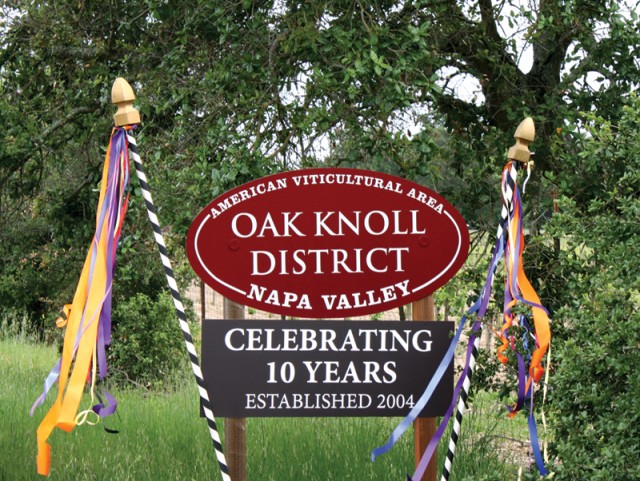 Wineries in the district include Trefethen Family, Monticello, Robert Biale, Blackbird, Matthiasson, Lewis, Laird, and Black Stallion among others. Many prestigious producers grow or buy grapes from the area including Opus One, Caymus, Joseph Phelps, Beringer, Merryvale, Rombauer, Duckhorn, Whitehall Lane, HdV. There is a prevalence of small, family-owned growers in Oak Knoll.

Of Oak Knoll District’s 8,300 acres, nearly 4,200 are planted to wine grapes. There are more than 18 varieties, making it one of the most diverse sub-appellations. Top varieties by acreage are Merlot (1,113 acres), Chardonnay (1108 acres), Cabernet Sauvignon (926 acres), Pinot Noir (291 acres), Syrah (166 acres), and Sauvignon Blanc (142 acres). Additionally, all the other classic Bordeaux-style red varieties are planted, as well as Riesling and Zinfandel.

The vintners and growers worked for many years to have the area recognized as the Oak Knoll District of Napa Valley. A lengthy challenge from an out-of-state winery named Oak Knoll delayed its formal AVA status. In the end, the 150-year history of the region played an important role in the granting of the AVA.

“I cannot believe how ten years have passed, or that it took nearly ten years previous to that to work through the challenges of keeping our historic place name intact, but here we are and I am delighted to see the district thriving. The vineyards are better than ever, the wines are varied, distinctive and outstanding across the board. It’s a great time to be in the Oak Knoll District,” said Janet Trefethen of Trefethen Family Vineyards, founding district board member.