An Oxford biophysicist and a psychiatrist have teamed up to publish a book designed to help wine lovers refine their blind tasting skills. 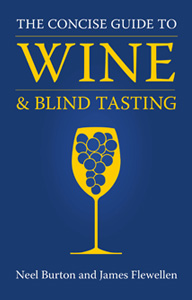 The Concise Guide to Wine & Blind Tasting features a guide to the world’s key wine regions, supplemented by a series of crib sheets to help readers distinguish the typical stylistic traits of grape varieties when grown in different parts of the world.

There is also a section offering advice on how to organise your own blind tasting event, as well as brief guides to food matching and European classification systems.

The guide represents a joint project between psychiatriast Dr Neel Burton and biophysicist James Flewellen, who competed as a student in the annual Varsity blind tasting match, where he was twice awarded the prize for the best individual score. The pair now run The Oxford Wine Academy, which specialises in wine education and tasting events.

Explaining the inspiration behind this book, Burton presented it as a response to the twin factors of an ever expanding world of wine and the growing popularity of blind tasting.

While admitting that blind tasting remains a “niche activity”, he nevertheless suggested: “it is growing, as more and more people are drinking wine, and doing so more often and more critically.”

While the match between Oxford and Cambridge celebrated its 50th anniversary last year, with sponsor Pol Roger recently publishing its own book to mark the milestone, Burton pointed to the rise of blind tasting contests “as far afield as Denmark and Hong Kong.”

Despite the large number of wine-related books already published, including these recent additions highlighted earlier this year by db, Burton argued that this new offering distinguished itself by being tailored to the specific needs of blind tasters.

“We tried to relate our descriptions of particular regions to the wine styles that they produce, explaining, for example, how the climate or the soil affects or contributes to the style of the wine produced,” he explained. “We also provided full tasting notes for the wines, and compared and contrasted them to similar styles that they are often confused with.”

Available from Amazon, The Concise Guide to Wine & Blind Tasting has an RRP of £25 for the hardback edition or £18.75 for the Kindle version.