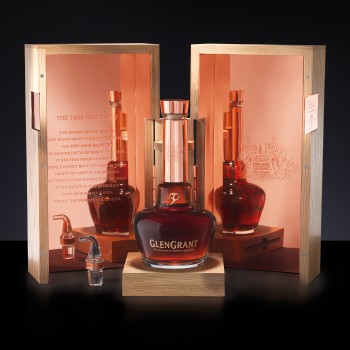 A cask containing what would become Glen Grant’s 50 Year Old single malt Scotch whisky was filled by Dennis Malcolm in October 1963 – a man who would go on to become the Master Distiller of Scottish distillery Glen Grant.

Fifty years later just 150 bottles are set to be released globally retailing at a starting price of €10,000 (£8,377) – making it Campari’s most expensive and oldest whisky ever released.

Dennis Malcolm said: “Only time measures our pursuit of perfection. Maturation cannot be rushed. Like people, casks mature at their own pace. I have protected and cared for this barrel for 50 years, letting it breathe and patiently waiting for the magic and interaction of whisky and wood.”

Each of the 150 bottles has been handcrafted and presented in a hand-blown crystal glass decanter created by craftsmen at Glencairn Crystal, the last family-owned crystal glass company in Scotland.

Each decanter is hand engraved, hand numbered and finished with the number 50 in 18-carat gold lettering.

The design of the decanter is an exact replica of Glen Grant’s tall pot stills and housed in a copper-lined box made from Scottish new oak.

Each Glen Grant 50 Year Old comes with a certificate of authenticity, signed by Dennis Malcolm and every craftsman involved.

The Glen Grant 50 Year Old will be launched in Asia’s Travel Retail Market and will be  available in Hong Kong from Friday 21 March and shortly following in Singapore, Seoul, Shanghai, Beijing and Taipei.

As of June 2014, it will be launched internationally in other duty free and domestic markets.