Ryan Chetiyawardana has a stinking cold. Meeting the affable cocktail maestro at his new East London bar on a freezing Monday afternoon in early February, his drink of choice is ginger tea. 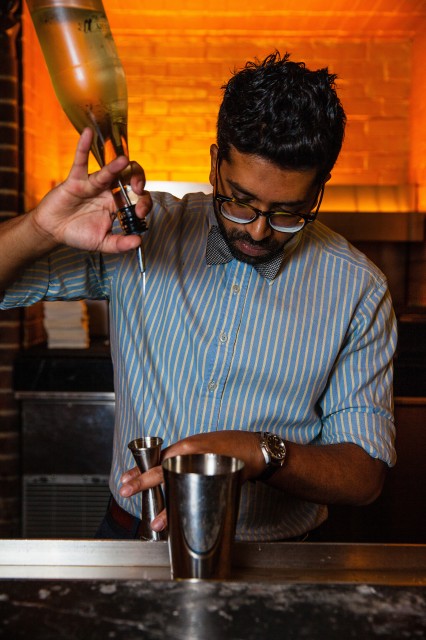 Sat beside him is his heavily-inked business partner Iain Griffiths. Dressed head to toe in black, Griffiths’ rolled up sleeves reveal everything from giant sailor’s anchors to a flame-haired, bikini- clad vixen.

Having met at the Bramble bar in Edinburgh, while Griffiths upped sticks to Sydney, Chetiyawardana was taken under the wing of Tony Conigliaro at his Islington speakeasy, 69 Colebrooke Row, before moving on to the envelope pushing Purl in Marylebone and Worship Street Whistling Shop in Shoreditch.

Having become one of the most respected names in mixology, last September Chetiyawardana made the bold move of opening his first solo venture, White Lyan in Hoxton, enlisting Griffiths to help run the project.

Named after Ryan’s childhood moniker, White Lyan isn’t your ordinary cocktail bar. There’s not a cocktail shaker or a twist of lemon in sight. And don’t even get them started on ice. Keen to shake up the industry, the concept for White Lyan is an audacious one.

All cocktails are pre- batched and served without ice. “We’re not anti mixology, we just wanted there to be as few rules as possible,” begins Chetiyawardana, adding, “A lot of people are put off from ordering cocktails because of their high price tags and the fact that they take a long time to make – our cocktails start at £6 and take under a minute to make, so we’re hoping to attract a broader audience.”

He continues: “This isn’t a vanity project – it isn’t about us, it’s about the customer. That’s why we stuck a pole in our basement; we want people to have fun.”

Poking a swizzle stick in the eye of convention, the pair shun the use of perishables and rarely garnish their drinks. 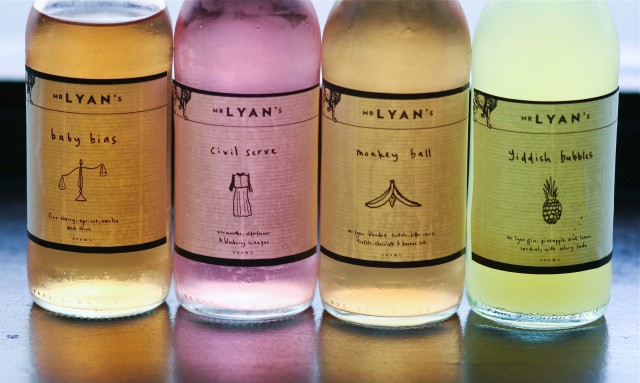 “You can’t get good citrus in this country. We get around the problem by using a number of different souring agents, from vinegars to different acids that we buy over the internet – citric, lactic, malic, tartaric, you name it,” exclaims Griffiths. But, having stripped away the shaking, flairing, mixing and twisting, doesn’t the bar lack that all-important element of theatre?

“I think, if anything, we have more theatre here, but rather than being focused around a flairing bartender with a big ego, it’s focused around our customers. Not having to mix millions of drinks allows us to be more intimate and purposeful in our interactions at the bar,” says Chetiyawardana, who estimates that with his business model, one bartender at White Lyan can handle up to 80 customers at a time and will be able to serve the cocktails in under 30 seconds.

Housed in what used to be the White Horse pub on Hoxton Street, like the cocktails, the bar takes a minimalist approach. Its black walls are brightened by sketches of copulating lions and other more family friendly artworks supplied by family and friends. The basement bar, where dancing on the furniture is actively encouraged, has a pole in the middle, a late licence and a hip hop heavy soundtrack. Keen to control every stage of the production process, the pair infuse them sous-vide.

The water they add to the drinks meanwhile, is filtered through two different types of charcoal with sodium, potassium and calcium added afterwards to offer a mineral component. “We’re not trying to be different just for the sake of it, or saying this is the best way to do things, we’re just keen to start a stimulating conversation around serves and the fact that there is more than one approach to mixology,” says Chetiyawardana. 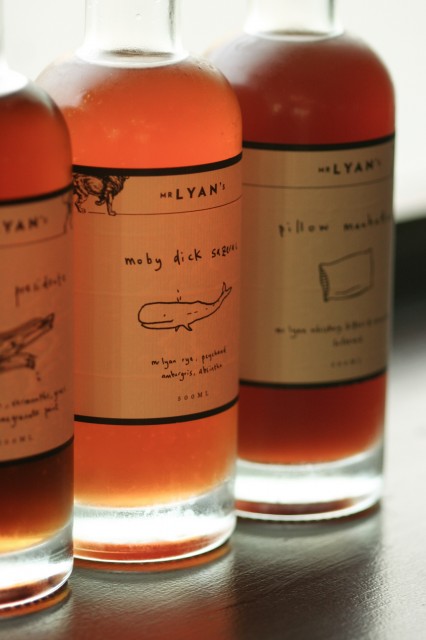 “It’s important to point out that we’re not distilling our own spirits but compounding them. We buy the spirits off the still, which we dilute to reduce the abv then add the top notes as you would with a perfume,” says Griffiths. Once the cocktails are made and bottled they are bulletproof and don’t have a shelf life.

A keen draughtsman, Chetiyawardana did all of the quirky illustrations for the bottle labels, including one of a whale for the Moby Dick Sazerac and a pair of scales for his Baby Bias cocktail.

But while the pair put their twist on the majority of the spirits they use, they are the first to admit that certain things, such as Angostura bitters, can’t be bettered. “If people do it better than us then we let them,” says Griffiths.

Though preferring to make their own, the pair are not anti branded spirits per se. In fact, they have installed an Enomatic machine for five rotating cherry picked spirits, from Hendricks to Havana Club 3 Year Old, which play a starring role in certain cocktails. Having worked for the master of molecular mixology – Tony Conigliaro – at 69 Colebrooke Row, Chetiyawardana’s serves are surprisingly simple.

You won’t find any foams or other fanciful tricks floating around his drinks. Among the signature sips are the Bone Dry Martini, which mixes Mr Lyan Vodka with a bone tincture made from roast chicken bones dissolved in phosphoric acid and mineral salts. The Moby Dick Sazerac meanwhile, features Mr Lyan Rye, Peychaud’s bitters and whale ambergris – a sperm whale secretion that can be foraged from the ocean – and is served with a strip of edible, absinthe-infused rice paper.

“The ambergris is basically a waterborne fur ball that whales cough up. Dogs go mad for it, it’s got an amazing musky aroma. The cool thing about ambergris is that it naturally accelerates other aromas and helps to lift different aromas from the drink as it warms up,” Chetiyawardana enthuses. The pair buy theirs for £35 per gram on the internet and have it flown in from New Zealand.

As all of the cocktails are pre-bottled, it means they can be made in a matter of seconds, freeing up time for Chetiyawardana and Griffiths to mingle with customers. 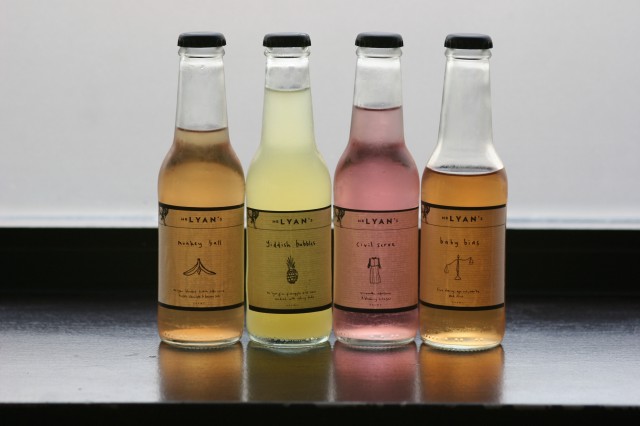 “It’s a very different back bar here – it’s more like a kitchen as we’re serving a finished product rather than making it in front of their eyes,” says Chetiyawardana. Final flourishes are added to the cocktails via atomiser sprays running the flavour gamut from grapefruit and grass to gunpowder. “We’re not anti garnishes but I think they need a reason to be there – they need to add something to the drink,” he offers. The Layered Negroni therefore – the bar’s best selling cocktail – is coated in an orange distillate and has a match struck inside it before the gin is poured in to add an attractive burnt note.

Chetiyawardana insists that pre-bottling the cocktails was a consequence of the concept rather than the concept itself. “We set out to create drinks in a different format and pre-batched is the format they have taken on,” he says, admitting that he’s “fanatical” about details and will happily trial a dozen different batches of a single cocktail before deciding upon the final recipe. While many of the cocktails have been on the list since the bar opened in September, each is a moveable feast. “We’re constantly rehashing, revising and revisiting our recipes – some of the   cocktails are currently on their fifth incarnation,” says Chetiyawardana proudly. 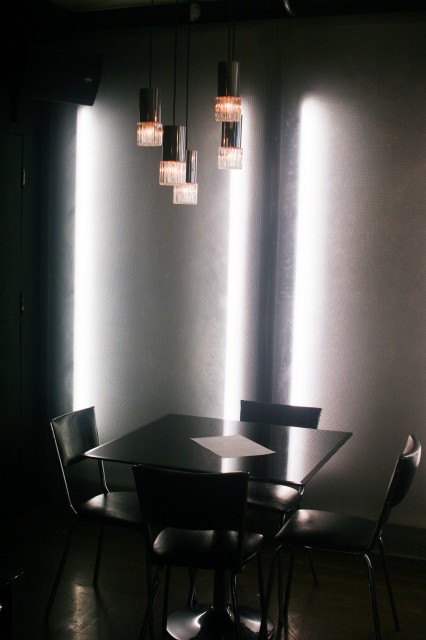 Glassware is taken equally seriously at the bar, with all of the glasses kept in a freezer to help chill the contents down after serving. Interested in the flavour arc of a cocktail, Chetiyawardana believes the aromatic profile of a drink changes considerably depending on the temperature it is served at and factors in the role of temperature into each of his creations, endeavouring to serve them all at their optimum temperature.

A lack of ice means many of the cocktails appear smaller than normal in the glass – has this led to customers feeling that they’re being short-changed? “Our Bees Wax Old Fashioned fills up around a third of its glass – yes, it might look a bit different but we’re asking people to think about cocktails in a new light.

We haven’t had any complaints so far,” says Griffiths, adding, “The Moby Dick Sazerac is one of our best sellers and the cocktail is typically served without ice, which fits our model perfectly.”

Sweet on the idea of mood and drink matching, Chetiyawardana claims to be able to offer a cocktail for every emotion. “We want people to choose a cocktail to suit their mood rather than be driven by a specific brand. It’s easy to fall back on your favourite gin – we’re trying to encourage people to think about their own tastes and preferences,” says Chetiyawardana, adding, “The key to being a good bartender is to understand the customer without having to ask too many questions – it’s very important to be intuitive.” White Lyan is the first of a number of projects he has up his sleeve, all of which will fall under the Mr Lyan umbrella.

He and Griffiths are due to open a second London bar later this year, which will have an entirely different concept. “We don’t want to go into detail about it yet, but it will offer an immersive experience and will hopefully generate another form of discussion around drinks,” says Griffiths. Despite his growing international profile, for now at least, Chetiyawardana seems happy to keep London as his base, which he describes as the “cocktail capital” of the world.

“While New York used to wear the crown, in the last two to three years London has overtaken it and now leads the way in terms of mixology trends. We have a more international crowd of bartenders here and mixologists know their product better than in New York,” he offers. And if London is now the cocktail capital of the world, Mr Lyan is the king of the urban jungle.