A Heineken truck carrying hundreds of crates of beer was cleaned out “within minutes” by passing looters after it crashed in South Africa.

The Kranspoort pass, in South Africa’s Mpumalanga province, was closed two hours on Saturday after the truck spilled its load of Heineken beer onto the road at about 2.15pm, according to a report on the citizen.co.za.

The driver, named as Mr Piet Mokopedi, was taken to hospital with minor injuries following the incident, which he said was caused by his brakes failing as he was driving down a steep hill.

As he was rushed to hospital, a frenzy ensued with hundreds of people “appearing from everywhere” to help themselves to dozens of crates of beer from the stricken vehicle, quickly emptying its load.

Looters, described by local media as a “crazy crowd”, revelled a beer-filled free for all with many walking away with crates of beer with some coming back for more and others even calling on friends and other motorists to join them.

Police officers reportedly “helpless” as they looked on at the large crowd which was deemed too dangerous to confront and almost impossible to control. 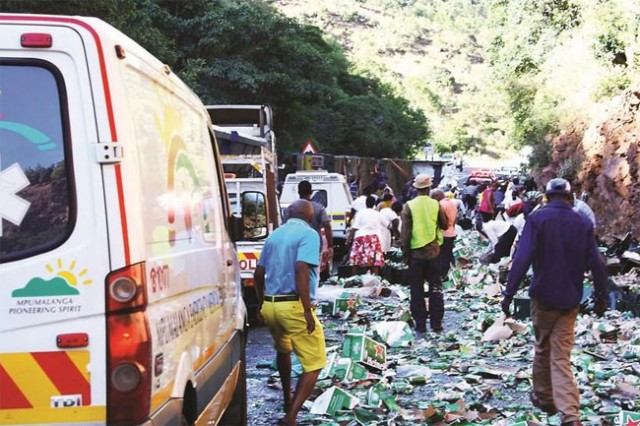