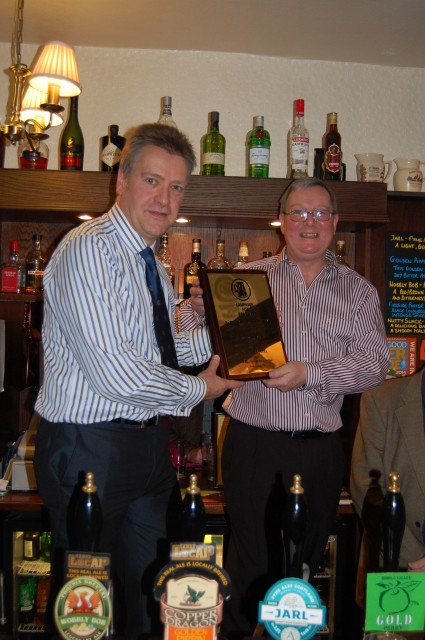 The Swan with Two Necks in Lancashire was named “National pub of the year” by the campaign for real ale (CAMRA) this week. A plaque was presented to landlord Steve Dilworth (right) by Colin Valentine (left), CAMRA National Chairman on Wednesday. 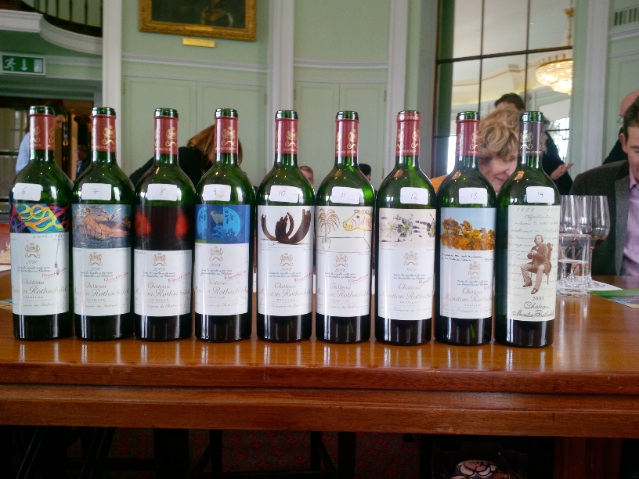 db’s Rupert Millar was lucky enough to attend the Institute of Masters of Wine’s Mouton Rothschild tasting at Trinity House this week. 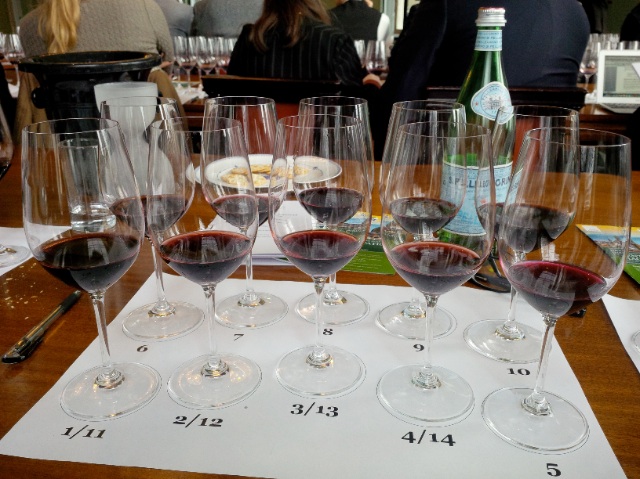 Mouton’s managing director, Philippe Dhalluin, led a packed hall through a vertical tasting of the 2011-2003 vintages as well as a sneak peak at the 2013 – its constituent parts and an initial assemblage for Petit Mouton and the grand vin. He described the vintage as not being the most difficult ever suffered. 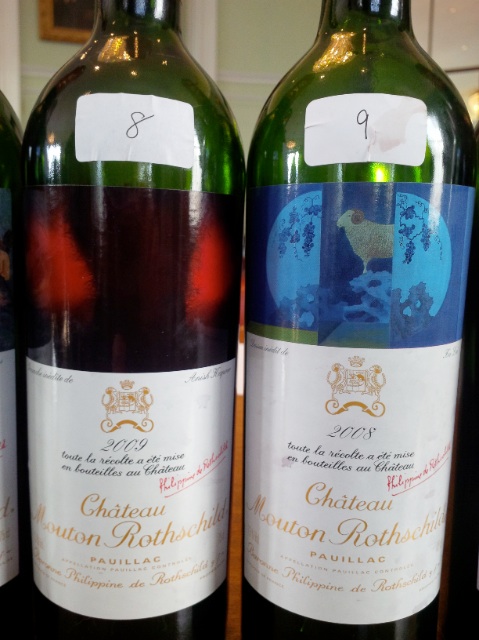 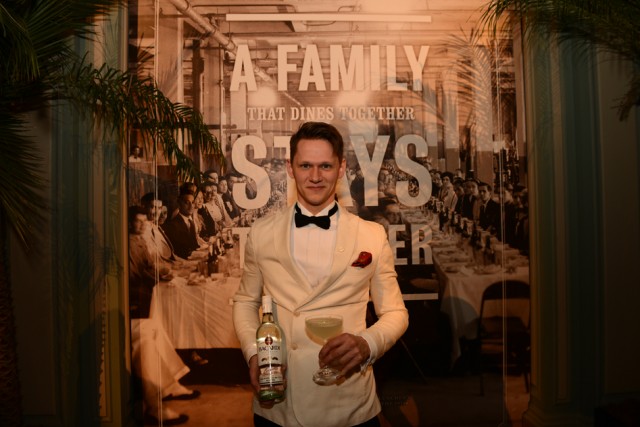 Industry professionals gathered on 4 February to see Tom Walker’s Maid In Cuba cocktail named as the winning drink of the Bacardi Legacy Cocktail Competition. Walker, from The American Bar at the Savoy Hotel, will  go on to represent the UK at the Global Final in Russia in May. 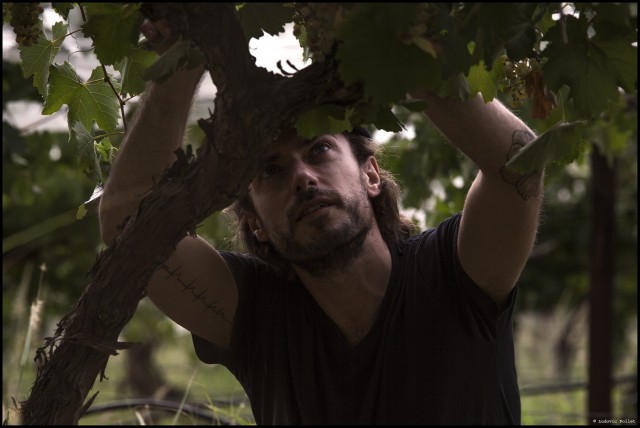 The wine explorers continued their adventure in Namibia this week. The team have set off on a three-year adventure to explore the world’s most obscure wine regions. This picture was taken during harvests in Namibia at the Kristall Kellerei Winery, in Omaruru (about 240km north-west of Windhoek, the capital). 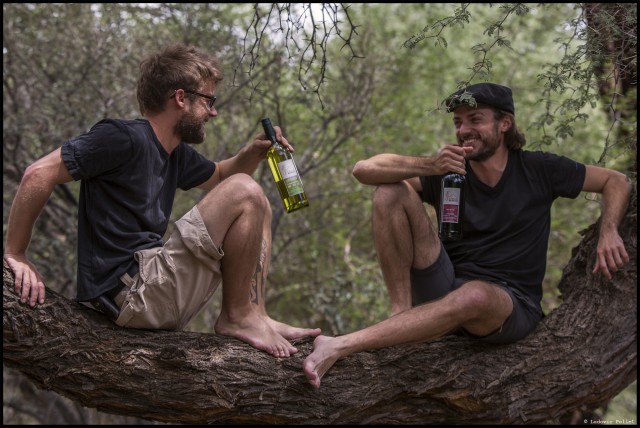 Taken at the Kristall Kellerei Winery which produces both red and white wines in average temperatures of 34 degrees. The winery is owned by Michael and Katrin Weder who grow Colombard and Ruby Cabernet grapes. 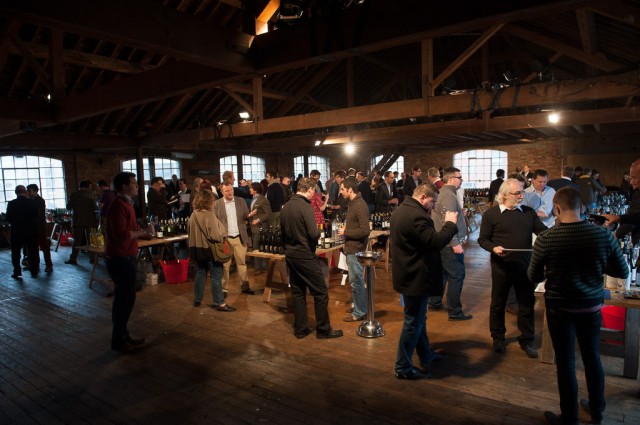 Alliance Wine kicked off 2014 with two food focused spring portfolio tastings last week to celebrate its 30th birthday, reinforcing the company’s intention to bring fun into the business of wine. Guests enjoying the tasting in London – held in the Dragons Den venue on Tanner St. 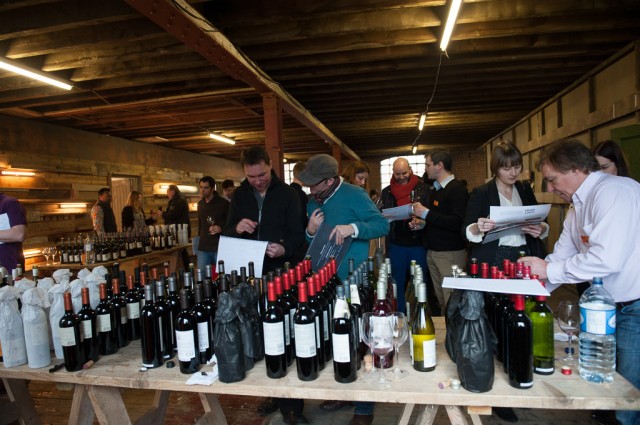 Guests working through the Argentine and Australian ranges in London 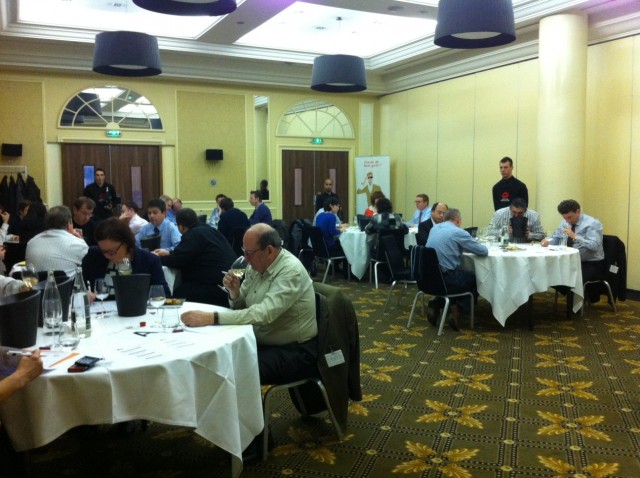 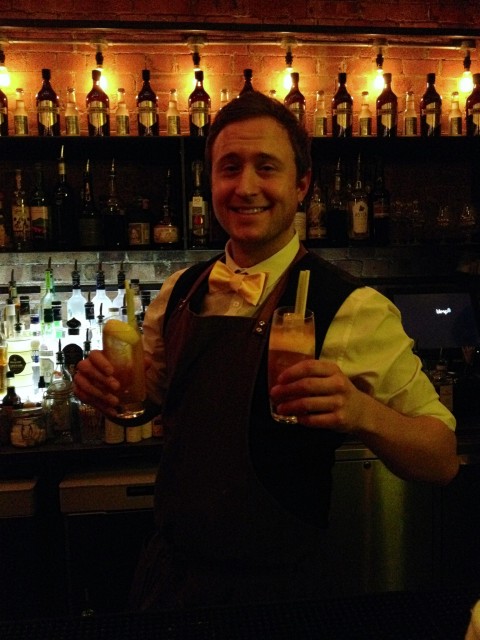 With thoughts of spring on our minds, db jumped at the chance to attend the launch of the new look Kamm & Sons bottle at Oskar’s bar downstairs at Michelin-starred restaurant Dabbous, where head bartender Oskar Kinberg was shaking summery Kamm & Bitter Lemon cocktails served alongside canapés crafted by head chef Ollie Dabbous. 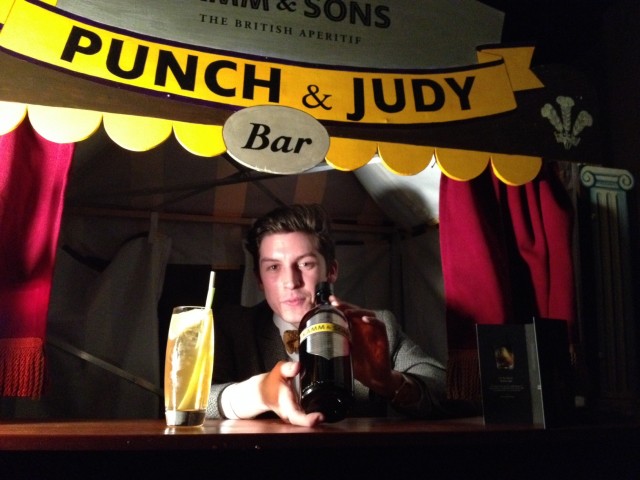 While at the launch, we met the dapper James Stevenson, who, in addition to working for Kamm & Sons’ founder Alex Kammerling, has also just launched his own spirit – Dog’s Nose Hop Gin, that uses Chinook and Columbus hops as a botanical. There’s also a white whiskey in the pipeline. 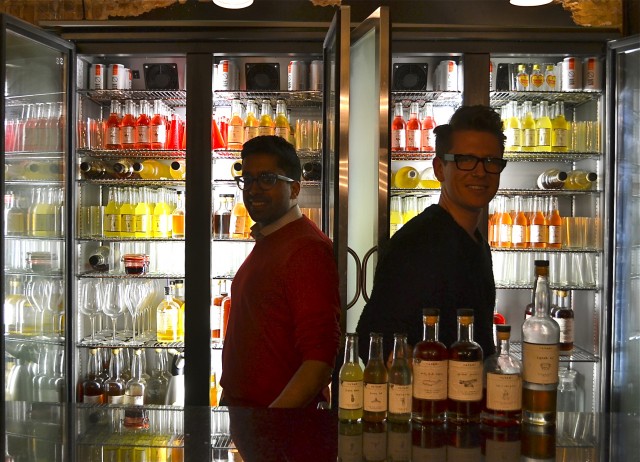 db hot footed it to Hoxton this week to meet cocktail maestros Ryan Chetiyawardana and Iain Griffiths, owners of daring new cocktail bar White Lyan that specialises in pre-bottled cocktails and shuns the use of ice, citrus and perishables. Among the standout sips on the menu are the Moby Dick Sazerac, which uses whale ambergris as an ingredient, and the Bees Wax Old Fashioned. 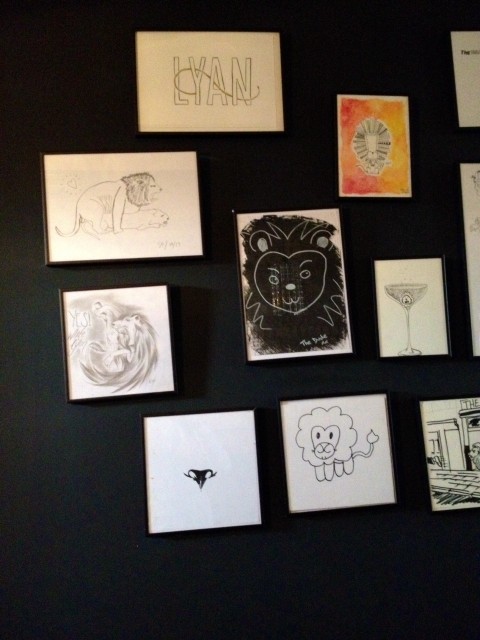 Before the pair opened the White Lyan, they asked friends and family to contribute lion-themed drawings to brighten up the black walls, some of which were more family friendly than others… 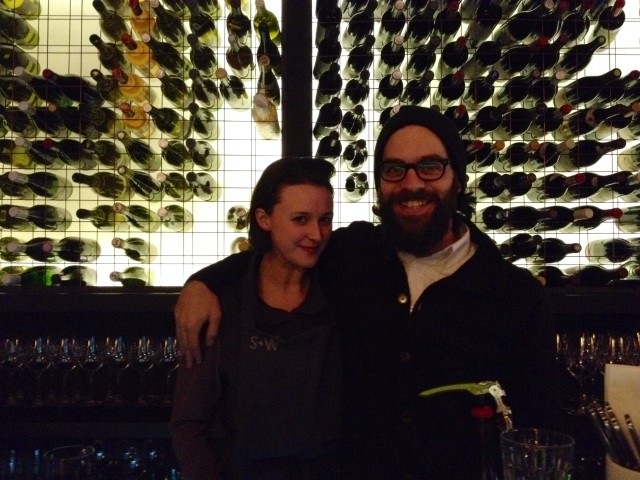 While Hoxton way, we thought we’d take the opportunity to pop into trendy new wine bar Sager + Wilde, run by wine loving husband and wife duo Michael and Charlotte Sager-Wilde, which specialises in hard to source wines by the glass, such as the 1998 vintage of Nicolas Joly’s Roche Aux Moines Savennieres and the 2000 vintage go Elio Sandri Barolo. All bottles come with a fixed £20 mark up, meaning the more you spend, the better value per sip you get. 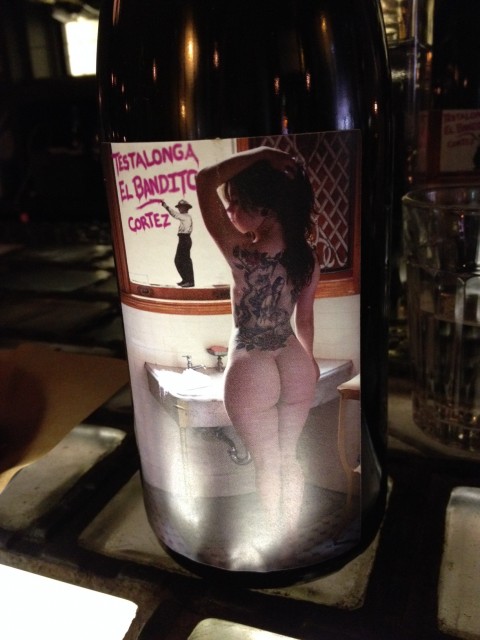 While enjoying a ham and cheese toastie and a herby red from Bandol in Provence at Sager + Wilde, we were taken aback by the racy new label gracing Craig Hawkins’ El Bandito Cortez from the Swartland. 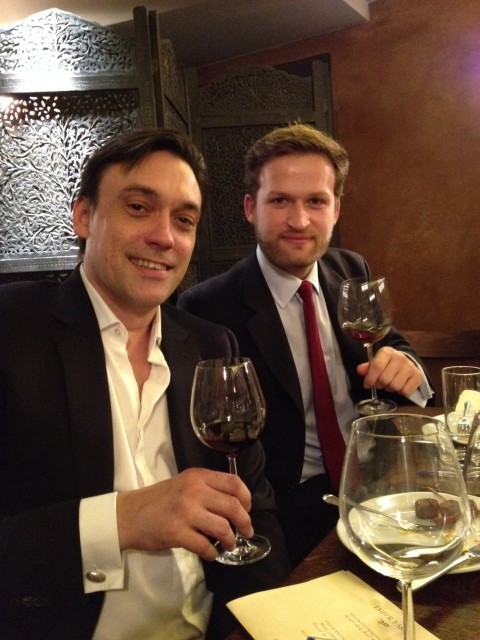 db was invited to a special lunch hosted by auction house Christie’s the week, where we were lucky enough to try top Ribera del Duero red Vega Sicilia dating back to the ’60s at Spanish restaurant Ember Yard in Soho, the newest addition to the Salt Yard group owned by Simon Mullins (left) – pictured here raising a glass of 1970 Unico with Christie’s wine specialist Noah May. 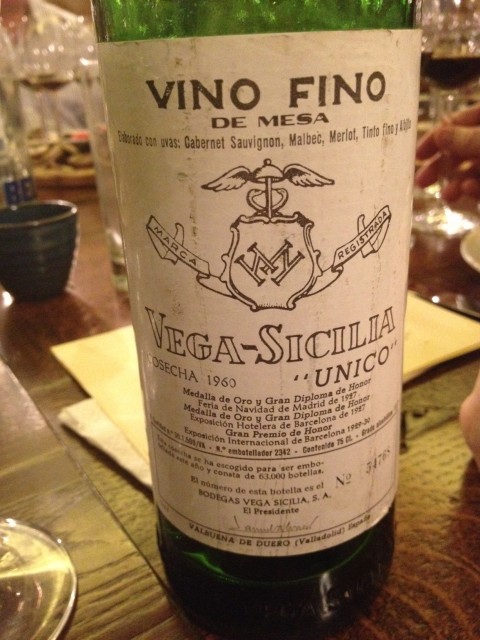 Among the vintages of Vega Sicilia Unico on pour at the Christie’s lunch were 1990, 1974, 1970, 1965 and 1960 (pictured here) served alongside sharing plates such as charcoal grilled chorizo with saffron aioli, pot roasted Ibérico pig’s cheeks and charcoal grilled Hereford beef rump with horseradish crème fraiche. Opinion was divided as to the standout wines of the lunch, but db found the 1990, the 1970 and the 1960 particularly wonderful.