Blue drinks & bizarre ingredients: where will it end?

I love so many things about this industry.  But there are also things I hate. Foremost amongst these are blue drinks and bizarre ingredients. 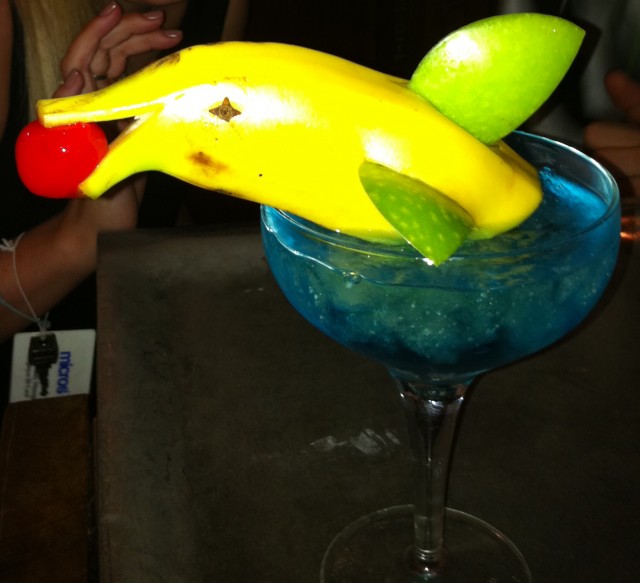 I love the sound of a bar when it’s full and the feel of it when its finally empty. I love the creak of leather as you sit on a vintage chair and the first expectant glimpse of a new cocktail list.

But I hate blue drinks and bizarre ingredients.

Blue Drinks might seem a small thing to have big issues with and I admit part of it might be down to being a child of the eighties, a decade that gave us the Blue Lagoon, Blue Whale, Blue Alexander, Blue Angel, Bahama Blue and the Black and Blue (which was incidentally just blue.) But to me there’s just something superficial and forced about them, like the laugh track on an episode of Friends. They’re a throwback to the least elegant age of the cocktail, a time, like much of the music, best left forgotten.

Nothing is ever improved by being that colour. It’s probably blue because of Blue Curacao, though I am aware you can achieve it through the water of boiled cabbage, but face facts you probably haven’t. I do not believe Blue Curacao improves any drink (one word – Cointreau.) If something is not improved by an ingredient then by default it’s lessened or at least plateaued by it. The only reason therefore that the drink is blue is because a bartender wanted it to be, and why is completely beyond me, but it’s spreading I tell you, spreading!

Last time I ranted about this, a friend bought me a Corpse Reviver Number Blue in retaliation despite knowing my stance on this issue. I then faced the argument that blue drinks are fun! Blue drinks are not fun! They do not sing, dance, or do humorous impressions, they are the same drink – only blue! I refuse to bow to this tyranny of novelty. It’s a fine line from there to drinks with sparklers in them.

Where was I? I redded out their for a bit. Oh that’s right, bizarre Ingredients.

Not to be confused with innovative ingredients which I am all in favour of, I’m talking about ridiculous and unnecessary inclusions, (though I admit there can be a fine line between the two.) I’m talking about the father of baby twins who claimed breast milk as an ingredient in his twist on the Alexander and sparked a small biohazard event. I’m talking about, and no names mentioned, the venue that included a whale skin infused whiskey drink on it’s list. I’m talking about ingredients that do not in any way contribute anything whatsoever to a drink except a surreal sense of the bizarre and a small glimpse into the inner workings of the bartenders mind, a place no one should willingly tread.

I’m aware that bartenders will use anything as an ingredient given half a chance. If there had been one at Roswell in the fifties they would no doubt have attempted to infuse a drink with alien blood (and it would probably have been blue). However all because you can do something doesn’t necessarily mean you should do something.

I’m pretty sure the whale would have preferred the latter.