The world of gaming came alive recently with the launch of Grand Theft Auto 5, but what cocktail should you be drinking with this and other games? 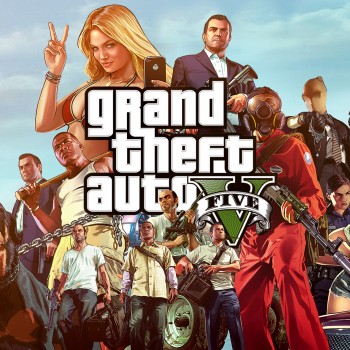 The geek world of gamers has combined with cocktail making on a surprising number of occasions and there are cocktails to go with a huge number of games.

From Sonic the Hedgehog to Pac Man and from Tomb Raider to Super Mario Kart, find out which cocktail goes with your favourite game.

And don’t worry, we reckon that having a cocktail while playing Super Mario Kart does not constitute drink-driving. 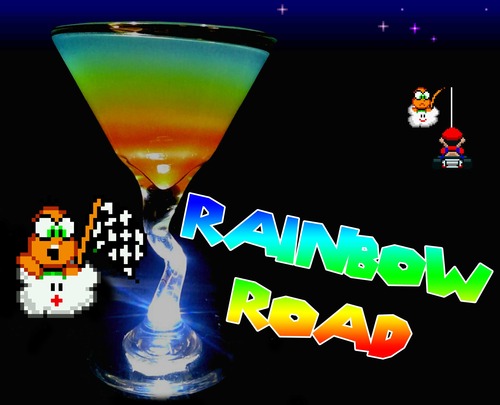 It is over 20 years since Super Mario Kart was launched by Nintendo and racing games were completely changed. Battling other drivers, collecting power-ups and drifting round corners were just some of the features of this game. With bright and colourful graphics it is entirely appropriate that the cocktail for this game is a psychedelic number.

This cocktail is listed on nintendrunk.tumblr.com, with a note from the creator that explains the thinking behind the concoction. “Super Mario Kart was the first time we got to fall into infinite space off the seizure-inducing Rainbow Road. So, we really had no choice but to make this powerful, colourful, easy-to-spill drink:
“In addition to taking our inaugural drifts around Rainbow Road we triggered boos and lightning bolts, played as Koopa Troopa and Bowser, and tied balloons to our karts and shot each other with shells. The original game is still a ton of fun, but it’s great to see how much those basic elements have evolved over the last 21 years.”

Directions: Mix orange juice and gin together and pour them into the glass. Then, stir the rum and grenadine together and pour it slowly down the side of the glass – it should settle at the bottom, turning the bottom red and the area immediately above it orange. Mix the vodka and blue Curacao together and then layer it on top of the orange juice. The top should remain blue, but some should settle down to create a green layer. Like Super Mario Kart’s toughest course, this drink may be difficult to finish.

Here, have a taste of the madness! (video below): 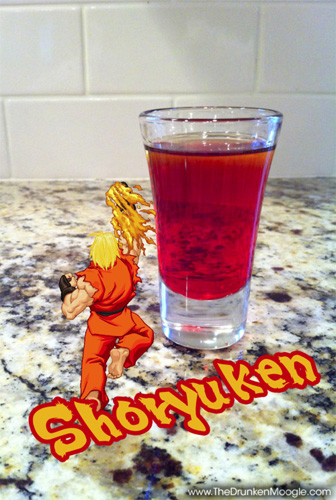 Executing particular combinations to help your character finish off fighting opponents was a key feature of Street Fighter, one of the first one-on-one martial arts fighting games.

The Shoryuken is a special combination attack in the game, used by the characters Ryu and Ken. The jumping uppercut was a great way to counterattack pretty much any move by your opponent, particularly in the early versions of Street Fighter.

Although the potency of the move may have diluted as the game evolved this remains a potent shot drink to have if you executed the move successfully.

Directions: Mix the ingredients in a shot glass, pouring the Southern Comfort over the top last. Mash buttons and drink.

Drink created and photographed by Mitch Hutts of The Drunken Moogle. 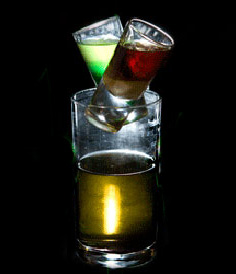 Known as the “frag grenade” this cocktail is not one for the feint-hearted – much like the game that it goes with.

This cocktail features two shooters and an energy drink. In the first shot glass pour in limoncello and Crème de menth. In the second combine Jagermeister and Baileys, and position these on top of a glass of energy drink with a shot of vodka.

Pull the pin on the first shooter, down that and you are left with the second shooter now combined with the energy drink and vodka. 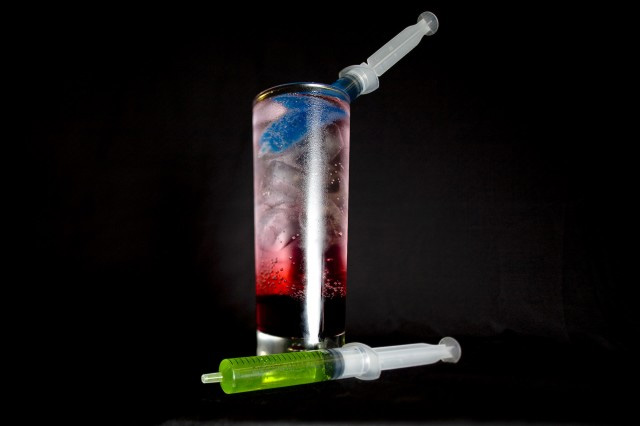 Called the G&T Virus, this cocktail is linked with the horror video game Resident Evil, which is now expanded into film and books. For this drink fill a highball glass with ice and pour in the grenadine, add the sloe gin and stir and then carefully add the Sprite. In one shot glass (or syringe as pictured) mix the T-Virus, the Blue Curacao and Bombay Sapphire and then in another mix the Anti-virus, the Midori and Gordon’s. 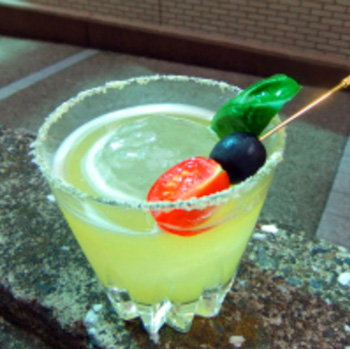 Perhaps one of the most iconic games of all time, as far as this scribe is concerned Pac Man is where it all started. The simplicity of running a little chomping character around a maze either being chased by, or chasing, four little enemies is now incredible. But it was hugely popular and it is only right that there is a cocktail to mark this game.
The Sound Cloud website lists the cocktail, from Kentaro Wada of Bar the Fifteen’s in the Shiba Park Hotel, Tokyo, as follows:

Rim a low-ball glass with grated parmesan cheese and drop in a big sphere of ice (to evoke the power-pill). Muddle basil leaves gently with the vodka. Add juices and shake. Strain over the ice ball. Skewer one black olive, one mini tomato, and a leaf of basil onto a toothpick and place across the top of the glass to garnish. 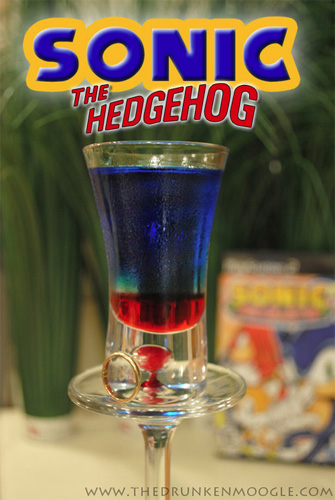 The famous, speedy blue hedgehog was developed by Sega and was known for racing through screens collecting rings and dodging bad guys. This shooter cocktail was created (and photographed) by The Drunken Moogle http://www.thedrunkenmoogle.com/ – and features a ring as well as being blue and red in honour of Sonic.

Directions: Pour in the grenadine first. Then layer the Mentholmint schnapps and Blue Curacao on top, in that order. Take it down faster than the Blue Blur himself. 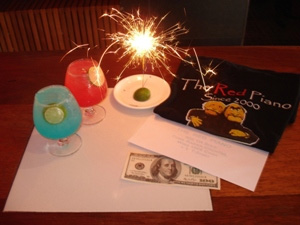 Credited by some as the woman who saved the PlayStation, Tomb Raider aka Lara Croft, is a huge female gaming icon. The Guinness Book of World Records has recognised her as the “Most Successful Human Virtual Game Heroine.”

This cocktail, which originated in the Red Piano bar in Cambodia is said to have been created when Angelina Jolie was in the bar and asked for something “fruity and fun. Featuring vodka, Malibu and pineapple juice. 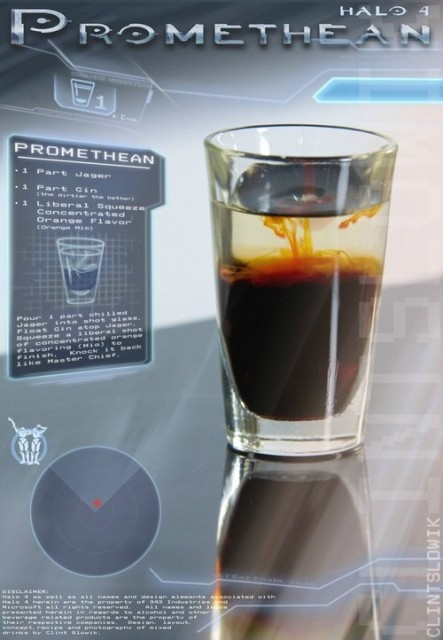 The Halo franchise is up there with Grand Theft Auto, as being a multi-billion dollar video game series that creates a massive furore each time a new version is launched. The last instalment, Halo 4, grossed US$200 million on its first day and the games alone have grossed over $3 billion worldwide. The popularity of the series has seen media beyond games spawned, including novels, graphic novels and indeed cocktails.

In the game, which is based around a war between humanity and aliens, the Prometheans are the most respected group of warrior-servant and were heavily muscled, capable of easily crushing a human skill. It is unlikely that drinking this cocktail will give you super-human strength, but it’ll probably leave you feeling quite special.

Directions: Add the Jager to a shot glass, then float the gin on top. Squeeze a liberal portion of Orange Mio flavoring in to finish.

According to halo.wiki.com, “Rampancy is a terminal state of being for Artificial Intelligence constructs, in which the AI ‘develops delusions of godlike power’, as well as utter contempt for its mentally inferior makers.” It’s fair to say then that this drink should be enjoyed responsibly. 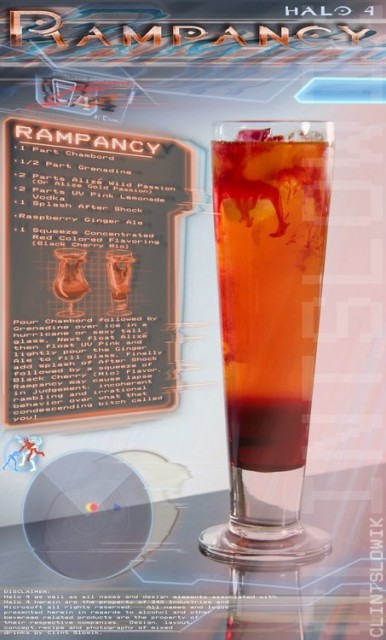 Directions: Pour the Chambord followed by Grenadine over ice in a glass. Next, float the Alizé and then the UV Pink Lemonade vodka on top. Lightly pour the Ginger Ale and fill to the top. Finally, add a squeeze of the Black Cherry Mio flavoring to the drink. 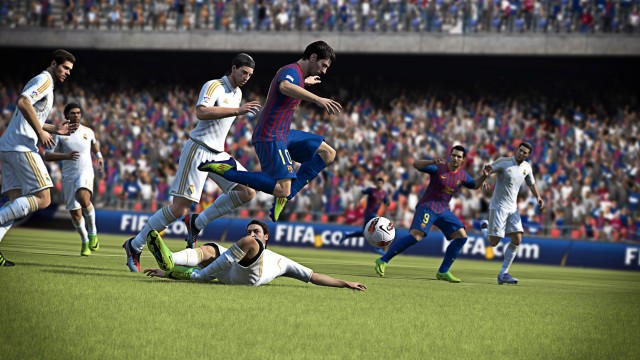 Launched in North America on Tuesday and set for release across the rest of the world on Friday 27 September Fifa 14 has sporting gamers all excited. Normally drinking and sport shouldn’t mix, but get a gaming console involved and it suddenly becomes more than acceptable.

So, which cocktail works for this game? The red card cocktail of course and it could be argued that the more of these you have while playing the game, the more likely you are to have players sent off. 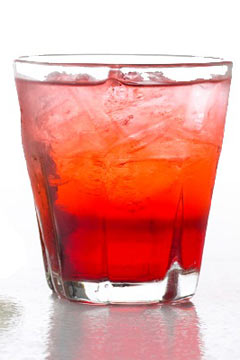 Add all ingredients into a shaker and shake over ice. Pour into a martini glass or on the rocks. 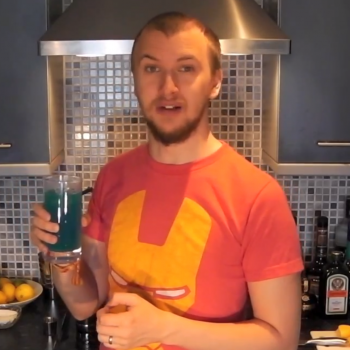 And finally we have the cocktail to go with the huge gaming release of the last week, Grand Theft Auto V (sorry Fifa fans). The Los Santos Beach cocktail is a strong highball drink that can be enjoyed while playing the game.

Listed on Absurdisan.com this fiery concoction features gin, vodka, Tequila and blue curaçao. Mix together with lemon juice and Sprite for what the creator calls a “refreshing beach cocktail”.

It’s fair to say that this drink is a better one to enjoy than the Molotov cocktail, which is often used in the game.

Shake together all alcoholic ingredients and the lemon juice in a shaker and pour into a highball glass with ice. Top off with the Sprite.