Pig steals booze and starts fight with a cow

A feral pig has caused havoc at an Australian campsite after drinking up to 18 cans of beer and then going on a drunken rampage. 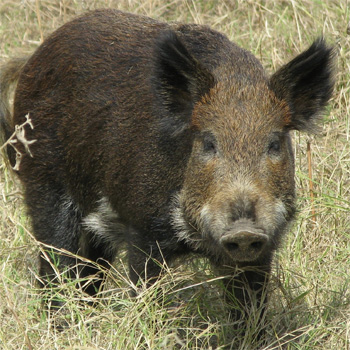 The pig stole the beer that had been left out by campers at the DeGrey River campsite in Port Hedland, Australia.

After guzzling the three six-packs the pig went on to ransack rubbish bin in search of food before starting a fight with a cow.

One witness told Australia’s ABC News: “It was in the middle of the night and it was these people camping opposite us and they heard this crunching of the can and they got their torch out and shone it on the pig and there he was scrunching away at their cans.

“Then he went and raided their rubbish that they had sort of covered over with a bin as well.

“And then there was some other people camped right on the river and they saw him running around their vehicle being chased by a cow.

“It was going around and around and then it went into the river and swam across to the middle of the river.”

Fionna Findley, of government agency Main Roads, told ABC that the agency was trying to find the aggressive animal.

She said: “It was last seen near the river itself, under a tree. I think it’s nursing its head today.

“Our guys aren’t equipped to contain or control these wild animals, especially under the influence.

“The guys who attended the scene said they had a chat to the guys and they were more upset the pig stole their beer.”