BrewDog heads into the spirits market

Independent brewery BrewDog has announced its “most eccentric and absurd project to date” with the launch of a new beer-based spirit, which it has called WattDickie. 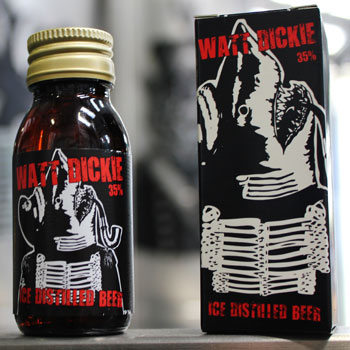 The new spirit was developed in a “radical brewing and ice distillation process”, which currently has a patent pending. The spirit has a 35% abv and is created using an IPA style beer. It is now available in BrewDog bars as well as at the brewery’s online store BrewDog.com.

James Watt, co-creator of WattDickie said: “WattDickie is beyond innovation. This is alchemy and apothecary. There was no hypothesis here, no ‘grand plan’, just an innate need to see what was possible.

“We went to the limits of brewing and took a match to them. WattDickie shakes maniacally at the foundations of what’s expected of us and of everything around us.

“This is science fiction. It’s the dawn of a new era. Welcome to a strange new world.”

The basis for WattDickie was laid when BrewDog became involved in a tit-for-tat exchange with brewers on the continent to create the world’s strongest beer.

Following years of development, the invention of bespoke distillation equipment and the gradual creation of the perfect style and formula, WattDickie is the first product from the brewery that the founders do not regard as ‘beer’. –>

<!– Martin Dickie, who worked on the creation of the spirit from beer, said: “What we have here is not beer, but its alter-ego. This is Mr Hyde. This is the shiver down the spine of the grease-slick ad-man relying on people lapping up the ‘same-old, same-old’ from their sticky bottles of snake oil. “This is a drink brewed by the misfits, for the misfits. It’s a beautiful, absurd experiment.” WattDickie will remain separate from the BrewDog brand: a new spirit and with its own unique brand identity featuring soldiers with shark and fox heads. James Watt added: “This is the bastard son of subversion and invention – the first original spirit style in decades. It was a breach birth from reckless and weird brains. It’s not something we, or anyone else, can replicate.”