We squeezed into our little table at the back of the room which was decked out with bright, cheerful posters of European icons with an Oriental twist to it. The posters summed up Rosa’s Thai Café pretty succinctly: an unlikely balance of Thai fragrance with London grit and bustle. 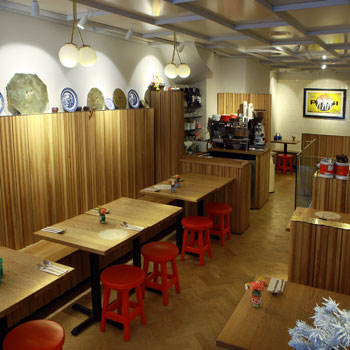 Even though we were there early mid week, the place was busy, abuzz with lively chat and snappy service. From a previously unsuccessful attempt to book a table there on a Friday night (we tried booking mid afternoon), I was expecting as much.

My plus one and I started off with some tea to refresh us after the trip into a bustling Soho, made slightly more hectic by the national mobilisation for the late Baroness Thatcher’s funeral. I sipped on the Kuki Hojicha roasted tea which had a lightly smoked, popcorn flavour and an intensely refreshing quality. My plus one opted for the lemon grass tea – a zesty aromatic pot of steaming goodness that smelt a little bit like a luxury spa (but, I am assured, tasted heavenly).

Once we felt a little more Zen, we started on the menu. Clearly laid out with specials in red, the menu is very user friendly with a good balance of enough choice without verging into overwhelming.

I opted for the fresh summer rolls while my plus one chose the Thai calamari, with a bottle of 2012 St Clair Bishops Leap Sauvignon Blanc. The summer rolls were plump and moist with generous helpings of coriander, with a good bit of zing thanks to the crunchy peanut sauce. The calamari were equally pleasing and tasted very fresh with a batter so light you could almost convince yourself it was a healthy option. 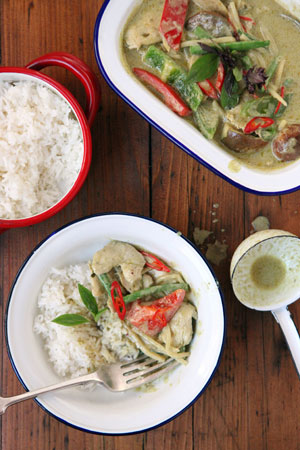 For the main we went for the spicy seafood hotplate and Rosa’s green curry chicken, mixed vegetables, garlic brown rice and jasmine rice.

By this stage, the restaurant was positively rammed. The table next to us which had been occupied by a couple having just mains had already been filled by another couple who were also having just mains. The staff were forever dashing around laden with trays of piping hot food leaving visible trails of aromatic steam as they went – all of which gave the place a particularly pleasant whirr of activity. This was made even more pleasant by the knowledge that we still had two courses – and two thirds of a bottle of wine to go. We were in no rush while the rest of the world bustled past us in a lemongrass haze.

The mains were copious (note to diners: if you’re not on the brink of imminent starvation one bowl of rice is fine for two) and very tasty. The chicken was beautifully cooked and the sauce was delicious with an excellent consistency. The vegetables all had different textures, from the crunch of the bamboo to the soft aubergine.

The spicy seafood hotplate had a lovely assortment of fish as fresh as the calamari starter, although the squid was a touch on the tough side which jarred a little with the delicate flesh of everything else on the plate. The garlic brown rice was the hands down winner with a lovely texture and nutty flavour which worked well with both of our dishes. The vegetables were hot and lightly seasoned and, like everything else put in front of us, ample. 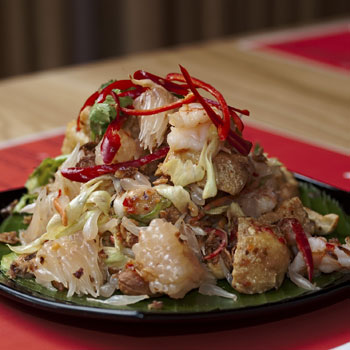 It might have been nice to have a raw or cold vegetable selection on offer as, with the heat and spice of the dishes, coupled with the intimate atmosphere of the place, we were fast working up a sweat. The wine was fragrant and full of gooseberry tartness which held up to the spice and fat in the mains admirably. The tart acidity cut through the heavy food, revealing a refreshing and elegantly floral side to the wine with the mains.

Finally, despite our stomachs clearly telling us no more was required, we manned up and ordered dessert. We both went for the ice cream (by now we were very keen for something cool), choosing the green tea and the Thai tea flavours. Despite my stomach’s strict instructions not to eat anything else, both helpings were not only finished but the plates licked clean. The flavours were crisp and clean, with a natural subtlety and almost dusty quality for the green tea.

Rosa’s is a gem of a place in Soho. It’s (relatively) cheap, fun, low key and, above all, makes really great food. The majority of people stay there for a short and sharp injection of quality food, but the atmosphere is one that lends itself well to just sitting and taking your time, as does the well-chosen wine list. The only thing that isn’t lingering-friendly is the seats for those not lucky enough to have nabbed a wall seat.

Rosa’s feels a bit like something that’s been part of the furniture on Dean Street with its typically intimate layout and general sense of bustle. In reality it’s only been there a few years. The sense of authenticity (both Thai and central London) makes it likely to be a permanent feature here.