Small is the new big. With over eight million inhabitants crammed into the capital, Londoners are having to rethink their use of space, and a trend is emerging for tiny bars housed in unexpected places, from old storage sheds and a disused double decker, to a Victorian gents’ loo. 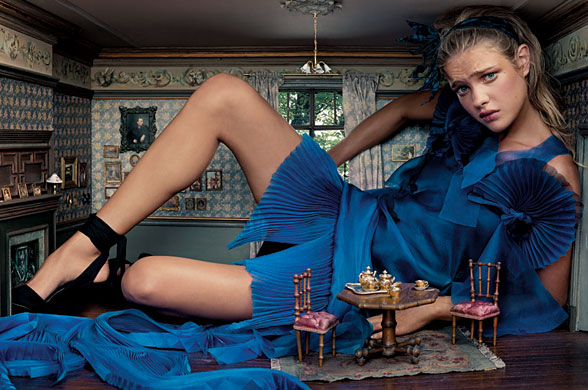 The latest diminutive drinking den to open in London is the 18-seater BYOC, a speakeasy with a twist accessed via a Covent Garden juice bar where customers are asked to supply their own base spirit.

Across town at The Attendant in Soho, which opened in January, the owners have taken over a former gent’s loo built in 1890. You’ll have to read on to find out how they’ve made use of the original porcelain urinals.

Our top ten tiny bars range from a Soho speakeasy once used by the Kray twins for dodgy deals, to the smallest bar in the world frequented by Charles II, Graham Greene and Ernest Hemingway, though not at the same time alas. 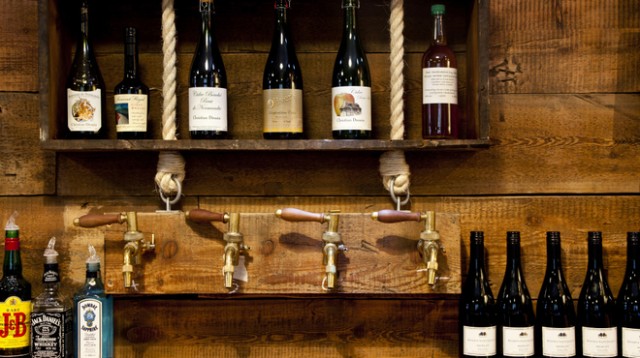 London’s only cider bar, The Cider Tap has taken up residence in the easterly of two tiny Victorian gatehouses built from Portland stone, which once formed part of Euston station. Beer dedicated big brother, The Euston Tap, occupies the other lodge across the street. In a nod to cider’s rustic roots, hay bales line the gatehouse’s outer walls.

Sharing the same principles as its artisan beer-loving sibling, cider offerings are plentiful and unusual, including five still ciders like the barrel-aged Upper House Farm at £3.40 a pint, and even a mulled cider from Orchard Pig at £3.60 a pint. Sparkling ciders meanwhile, include Lilley’s Apples and Pears and Aspalls Harry Sparrow at £3.60 a pint, and the 6% abv Sandford Organics Shaky Bridge at £3.80 a pint.

With five ciders served straight from the five-gallon barrel and bottled versions from across the UK and France available to take away, there’s even a wheat beer on draft for the poor souls who suffer from malusdomesticaphobia. The main seating area is up a winding, wrought-iron staircase, which, we’ve been told, is hard to negotiate after a couple of pints. Upstairs, pastel-coloured walls sport botanical drawings of cider apples, while miniature wooden barrels double as tables where you can chow down on hunks of British cheese and pork scratchings. 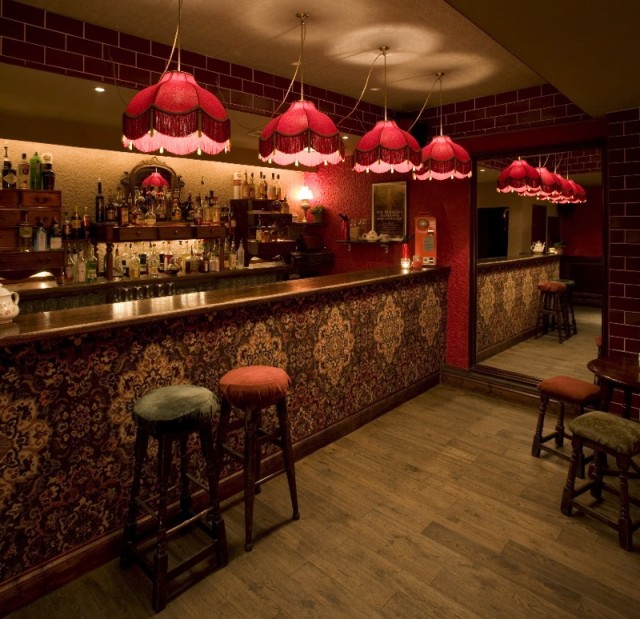 The Arts Theatre Club brings a slice of Prohibition era glamour to Soho. Founded by a troupe of actors in the 1920s, the bar once served as an illegal drinking den and playground for notorious criminals the Kray twins and other figures from London’s gangland underworld, who used the clandestine, candlelit club to conduct backroom deals.

Today proceedings are far more above board, but the illicit feel of the place remains through low lighting, sumptuous red sofas, Dirty Martinis served from bone china teapots, and a vintage piano that doubles as a DJ booth. 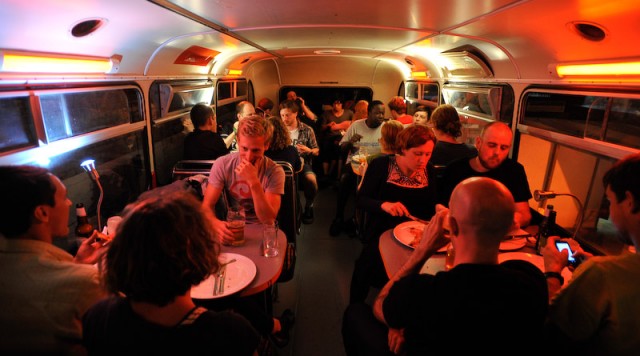 As the name suggests, Big Red is a vintage No.30 double decker bus, which has chosen a concrete stretch next to the DLR in Deptford as its final resting place. Having turned its engine off, the bus is enjoying a second life as a kooky cocktail bar and pizzeria. Prices are dirt cheap – Lynchburg Lemonades and Elderflower Fizzes can be ordered from a small booth at the entrance for a fiver, while locally-brewed Meantime beers are also available by the bottle.

Pizzas meanwhile, including the likes of red pepper and anchovy, parma ham and capers, and chorizo and black pudding, are cooked in a small kitchen beside the bus. 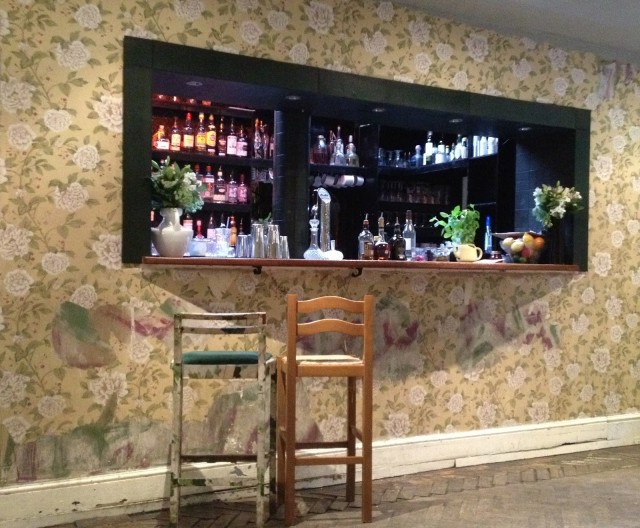 This adorable, if a little twee, dinky basement bar tucked down a flight of stairs on Charlotte Street is decked out with Laura Ashley floral wallpaper, frilly lampshades, mismatched furniture and lace table cloths your granny would go gaga for.

The prohibition era feel is created by the shunning of glassware for cocktails, including Cherry Sidecars and Chimps Tea; a heady mix of Monkey Shoulder, peach liqueur, Earl Grey syrup and orange zest, in favour of china tea cups and jam jars. A gramophone spins vintage vinyl by the open fireplace, and on its monthly Blitz night, revelers are encouraged to don 1920s dress. 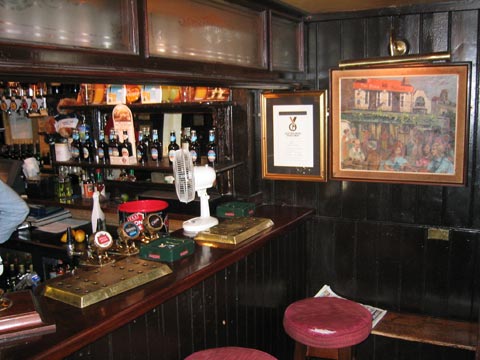 Not for the vertically well endowed, The Dove in Hammersmith boasts the smallest bar room in the world, according to Guinness World Records. But fear not, as wings can be spread during the summer months in a vine-entangled conservatory and patio.

The Dove’s dinky size doesn’t appear to have put off a number of literary heavyweights from enjoying a pint at the bar – the riverside pub was a favourite of authors Graham Greene and Ernest Hemingway. Legend has it that Charles II took advantage of its nooks and crannies to indulge in clandestine drinking with mistress Nell Gwynn. One of the King’s hand-written bills is on display at the bar, which offers a full range of Fuller’s ales. 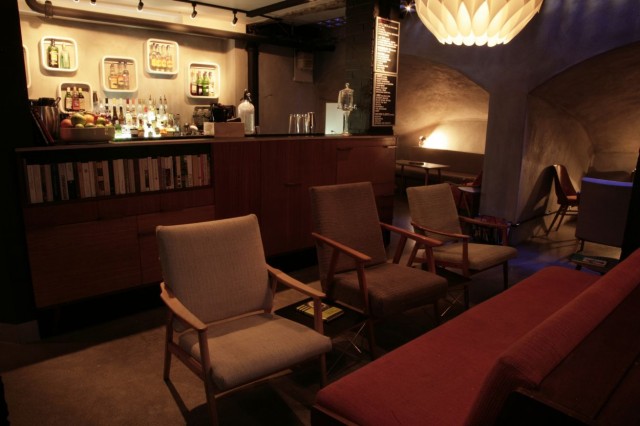 Notoriously publicity shy, this compact, inconspicuous, underground, 30-seater Soviet-style bar is sandwiched between a Shoreditch kebab shop and someone’s front door. Paying homage to 1960s Czechoslovakia, the bar is prettified by retro interiors and ‘60s light fixtures, while cabinets are lined with Eastern Bloc-era books. Entrance to the lounge is gained by booking an ‘appointment’.

Once inside, you’ll be treated to Cold War-themed cocktails served from milk bottles, bell jars, light bulbs and carved-out bibles. The 5-course cocktail tasting menu, priced at £30 per head, needs to be pre-ordered a day in advance. Popular classics like the Sgt Pepper and the Bubble Bath Martini demonstrate top hat-wearing bartender and owner Paul Tvaroh’s flair, who gets his recipe ideas in the shower. Be warned: suits are frowned upon, so make sure you dress down for the occasion. 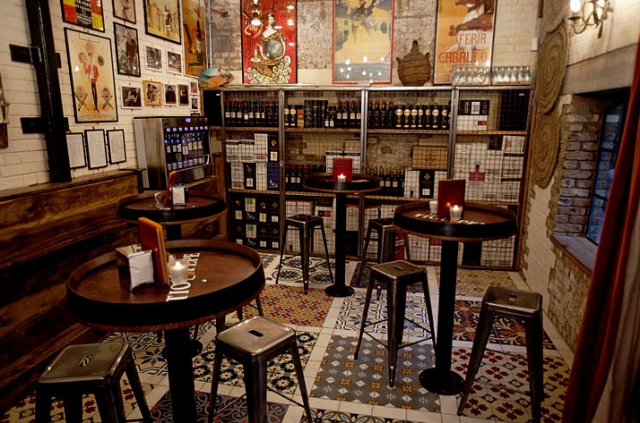 Keeping the list deliberately short so as not to intimidate novices, nine of the 15 Sherries on offer are from González Byass, which has partnered with Bigg on the project from the beginning. A recent addition to the menu is the Sherry “road trip”, offering a flight of eight 50ml measures running the gamut from the bone dry Hidalgo Pasada Pastrana Manzanilla to the treacle-thick Nectar Pedro Ximénez, for £21.50. For an additional £19.50 you’re given a tapa with each Sherry, including steak tartare and a devilish tarta de chocolate. 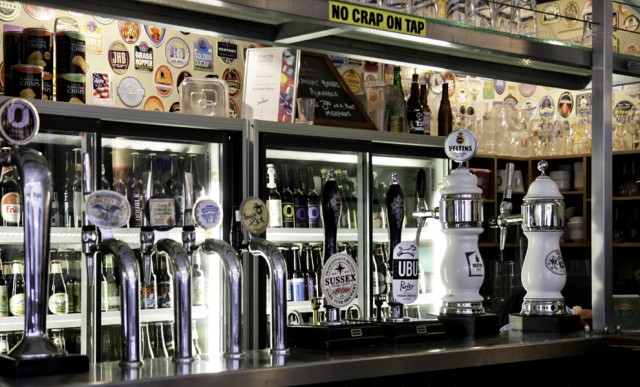 This royal blue-fronted Borough jewel run by the team behind the Utobeer stall in Borough Market claims to be London’s smallest pub, though has seen competition for the title from the Swan & Edgar in Marylebone and the Cask & Glass in Victoria. A beer lover’s delight, The Rake specialises in hip hops, and, impressively, the customer to beer ratio is 1:3, with a 40 person capacity and over 120 bottles of beer from across the globe in the fridge.

Visit on a Friday and you may well find our staff writer Rupert Millar propping up the bar. Promising “no crap on tap,” draught options change every two days, but include the likes of Aechte Schlenkerle Rauchbier (a rare smoked variety from Bamberg), Jenlain, Meteor Pils and Grisette Fruits des Bois offered in third-of-a-pint measures for easy sipping. 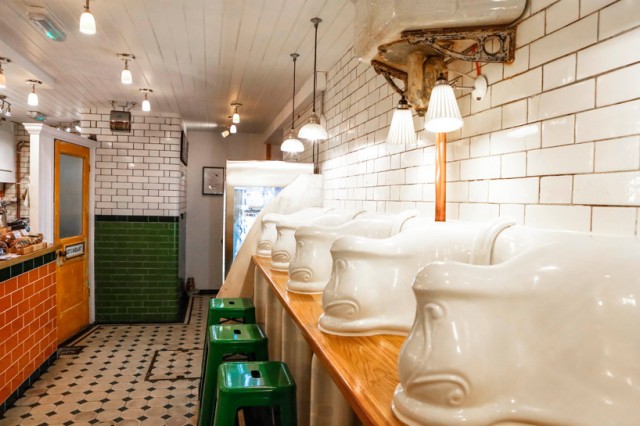 Not for the squeamish, The Attendant, which opened in Soho in January, is perhaps the capital’s most unexpected location for a bar, having taken over a former Victorian gentlemans’ loo. Built in 1890, the space has been doused with bleach and lovingly transformed into a coffee bar with the original porcelain urinals lining the table tops to create mini booths.

The tiny space is rammed with office workers at lunchtime getting their caffeine fix via cups of espresso made from Caravan single estate coffee beans by baristas obsessively committed to their craft. Breakfast offerings include vanilla-dipped French toast and almond milk porridge, while you can nip in for soup, salads and sarnies at lunch. 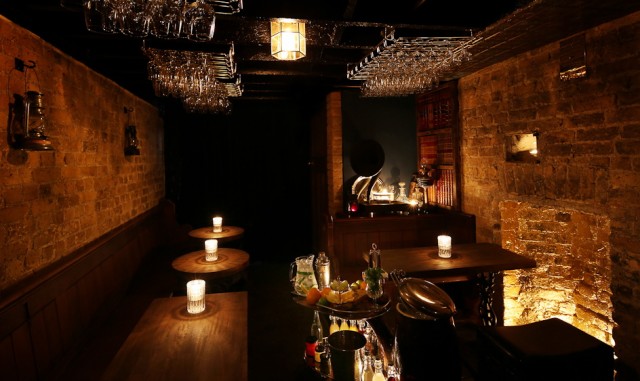 Tucked away down a cobbled street, through a juice bar, past a secret door and down spine-breaking steps lies London’s most miniscule cocktail bar – BYOC, a speakeasy with a twist. BYOC stands for “bring your own cocktail”, and the bar is probably the closest the capital gets to a genuine speakeasy as it doesn’t have a licence. Instead, customers are asked to supply their own base spirit and a £20 note in exchange for as many cocktails as they can cram into their two-hour slot. Stepping inside BYOC is like stepping back in time.

The 18-seater candlelit space boasts exposed brick walls lined with leather-bound books, framed convex mirrors, an open fireplace, filament bulb light fixtures and old church pews for seats. The air is filled with the mellifluous vocals of Ella Fitzgerald and Billie Holiday floating from a gramophone, while a sea of glasses hang precariously from racks attached to the ceiling.

Save from the tall, tailored bar manager Dan Thomson, the star of the show at BYOC is a vintage Italian drinks trolley kitted up with an arsenal of juices, syrups, herbs, spices, bitters, salts and homemade cordials, which weaves its way between the pews throughout the evening.